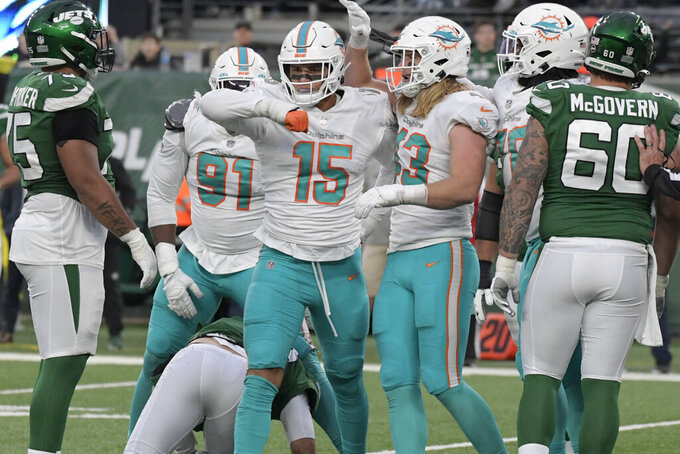 BETTING LINE: Miami by 4 1/2, according to FanDuel SportsBook.

TURNOVER DIFFERENTIAL: Giants plus-5; Dolphins minus-1.

GIANTS PLAYER TO WATCH: S Xavier McKinney had three interceptions in November, including one against the Eagles on Sunday that set up a field goal. His three picks tied him with Cleveland’s Denzel Ward for second in the NFL during last month, one behind New England’s J.C. Jackson.

DOLPHINS PLAYER TO WATCH: RB Myles Gaskin has 138 rushing yards in his last two games, which is a major step forward for Miami’s running game this season, and got into the end zone twice last week.

KEY MATCHUP: Miami’s run-defense numbers are improving, and the Giants haven’t been able to do much on the ground. If New York can’t run the ball, that’s a huge edge for the Dolphins, especially given the Giants’ injury situation at quarterback.

KEY INJURIES: Giants QB Daniel Jones is out with a neck injury and veteran Mike Glennon will start. Dolphins LB Jaelan Phillips, coming off a three-sack game last week, has a hip issue.

SERIES NOTES: The Giants are 3-0 at Miami, plus won what was a designated Dolphins home game at London in 2007. They’re the only team that has never lost when facing the Dolphins on the road. ... This is the Giants’ second trip to Miami in the last 25 seasons. ... Every Giants at Dolphins game played in Miami, excluding the London meeting, has been scheduled for December. This one will be played on the 28th anniversary of the first such meeting, a 19-14 New York win on Dec. 5, 1993. ... The Dolphins’ 2-7 record against the Giants is their second worst against any opponent. They’re 2-8 against Houston, a team Miami beat earlier this season.

STATS AND STUFF: Barring a big late-season turnaround the Giants are on pace to finish with their fifth consecutive losing record, which would be the longest such streak for them since an eight-season run from 1973-1980 -- ending the next year thanks in large part to a rookie named Lawrence Taylor. ... The Giants enter this week tied with Indianapolis for the longest active streak of games with at least one takeaway, 13, which goes back to last season. It’s the longest streak for the Giants since a 23-game run spanning 2010 and 2011. ... . The Giants were plus-4 in takeaways last week against Philadelphia. Teams are 10-0 this season with that sort of advantage and 249-5-1 since 2008 in that situation, and the Giants have won their last 28 games with that much of an edge. ... The first 16 games of Dolphins QB Tua Tagovailoa’s career saw him complete 64.6% of his passes, by far the best of anyone in franchise history with at least 100 throws in that span. Only Dan Marino and Ryan Tannehill threw for more yards; only Marino threw for more touchdowns. ... A win would match Miami’s longest winning streak under coach Brian Flores, a five-game run last season. ..Dolphins WR Jaylen Waddle is 125 yards shy of Miami’s rookie record; he has 759, Chris Chambers had 883 in 2001.

FANTASY TIP: Tom Brady, Lamar Jackson and Patrick Mahomes were among the quarterbacks who went up against the Dolphins and Giants in November. Not even those guys managed a big-number day. If you must use Miami or the Giants this week, kickers or defenses might be the safest play.