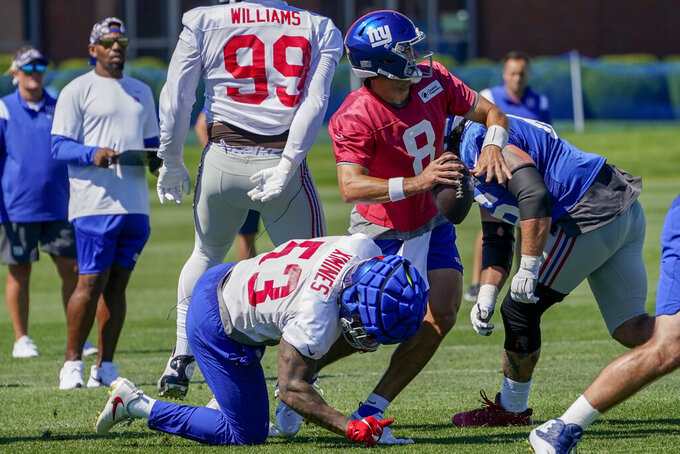 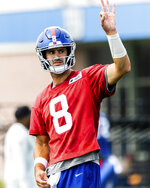 EAST RUTHERFORD, N.J. (AP) — When Brian Daboll was hired to be the New York Giants coach, there were hopes his offensive wizardy would rub off on Daniel Jones and make him a much better quarterback.

In four seasons as the Buffalo Bills' offensive coordinator, Daboll did a masterful job of transforming Josh Allen from a risky No 7 overall pick from Wyoming into one of the NFL's top quarterbacks.

Why not expect the same with Jones? The young man from Duke was the No. 6 overall pick in 2019.

“Daniel is his own person,” Daboll said Tuesday. “We’re doing the best job we can at trying to figure out the pieces we have around Daniel. What we can do well. We keep tinkering with that. That will be a constant until we get into the start of the season.”

Daboll refuses to compare the two quarterbacks. He won't even discuss Allen. His company line about Jones is that he is a good person who is smart and works hard.

Playing on three very bad teams, Jones has not done well. He has a 12-25 record as a starter with 45 touchdowns and 29 interceptions.

For all his smarts, Jones has been reckless running the ball, refusing to slide. He missed the final six games last season with a neck injury.

Allen's numbers are off the charts for the same three-year period. He has thrown 93 touchdowns and 34 interceptions in getting the Bills to the AFC title game in 2021 and the conference semifinal last season. They lost to the Kansas City Chiefs both times.

Daboll noted Jones has not been helped by working with either a different system or coordinator in each of his three seasons. He said his goal is to get Jones to focus on what he can control, like his preparation and taking plays one at a time.

Jones has been up and down since camp opened last week. He was picked off twice in practice on Tuesday by cornerback Adoree Jackson on throws that seemed aimed at the defender rather than the receiver. He also had a nice back-shoulder pass to Saquon Baarkley in the corner of the end zone late.

In Monday's first practice in pads, he threw an out pattern to a receiver that landed 10 yards short of the target.

“What was that, Daniel?” a fan yelled from the stands.

What's obvious after five straight losing seasons and coaching and player upheaval is the Giants still have a long way to go.

Granted, it's only a week-plus into camp, but it's going to take time, maybe a lot of it.

It might not be enough for Jones. The Giants did not pick up the fifth year option on his rookie contract.

NOTES: Two-time Super Bowl MVP Eli Manning watched practice after talking to the team earlier. ... Center Jon Feliciano returned to practice on a limited basis after missing three days with heat-related issues. ... Free agent receiver Robert Foster was carted off the field after landing heavily on his back making a catch out of bounds. ... Tackle Dexter Lawrence on his scuffle with guard Shane Lemiuex last week: “I didn’t start it, I finished it.” ... Despite leading the team in tackles last season, third-year inside linebacker Tae Crowder isn't taking anything for granted with a new coaching staff. “It’s in the past,” he said. “I’m worried about right now, and what we are doing today, so I’m just trying to be a better player.”