Giants seek to start 2-0; Panthers hope to even record 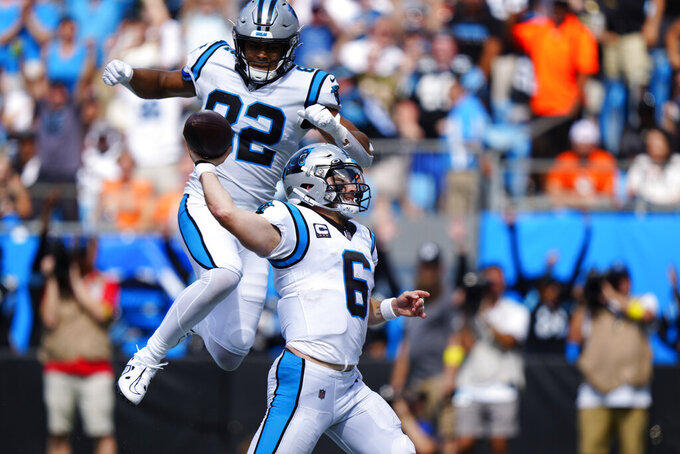 Carolina Panthers quarterback Baker Mayfield celebrates after scoring against the Cleveland Browns during the second half of an NFL football game on Sunday, Sept. 11, 2022, in Charlotte, N.C. (AP Photo/Jacob Kupferman)

EAST RUTHERFORD, N.J. (AP) — The New York Giants and Carolina Panthers have had so many consecutive losing seasons that the results of an opening game can be blown out of proportion.

Take Sunday's game at MetLife Stadium between the Panthers (0-1) and Giants (1-0).

Coming off a 4-13 record in 2021 and with Brian Daboll entering his first season as coach, little was expected of Giants after five consecutive losing seasons.

Surprisingly, the Giants beat two-time defending AFC South champion Tennessee 21-20 on the road last week with a late touchdown and 2-point conversion. For many fans, gloom and doom was replaced with hope for a miraculous turnaround in 2022.

Carolina, which has had four straight losing seasons, was beaten by Cleveland 26-24. It was the team's eighth loss in a row and it sparked some calls for the firing of coach Matt Rhule, who is 10-24 in two-plus seasons.

What's interesting is the fine line separating winning and losing. The Giants won because the Titans' Randy Bullock missed a 47-yard field goal on the final play. The Panthers lost because Browns rookie Cade York kicked a 58-yard field goal with 8 seconds left.

Still, there are different feelings in the cities.

“People are proud to put on the Giants gear and go to work on Monday,” Love said. “You feel that. But then you got to also realize it’s just one game of 17 this year. So we are far from where we want to be and we have a lot to improve on. But it’s hard not to just feel proud of kind of what it means to this community.”

“Having a win under our belts would be big, just in terms of turning a page on the losses,” tight end Ian Thomas said.

Carolina’s run defense was gashed for 217 yards and 5.6 yards per carry in Week 1 by Nick Chubb and the Browns.

Things won’t get any easier in Week 2 as they face Saquon Barkley, who finally looks healthy and ran for an NFL-best 164 yards against the Titans.

The Panthers struggled with tackling against the Browns — they missed 18 of them, resulting in 190 yards after contact.

“We really worked on taking better angles to the ball and wrap and roll,” Panthers linebacker Damien Wilson said. “All the basic tackling mechanics. I feel like taking the right angle is about 70% of it, then 20% is contact and the other 10% is driving your feet.”

The defense responded, limiting Henry to 82 yards on 21 carries. The longest run by the bruising back was 18 yards.

This week's challenge is the Panthers' Christian McCaffrey, a 2019 All-Pro who has dealt with injuries the past two seasons. He rushed for 33 yards and a TD on 10 carries and caught four passes for 24 yards against Cleveland.

“This guy is Barry Sanders,” Martindale said, comparing McCaffrey to the Hall of Famer who was one of the NFL's most elusive backs.

Baker Mayfield had four passes batted down at the line of scrimmage by the Browns, so look for the Giants to use a similar strategy to slow down the 6-foot-1 quarterback.

“He’s one of the shorter guys, so getting our hands and affecting him hopefully will help us in the game,” Giants defensive tackle Dexter Lawrence said.

Mayfield has had 48 passes batted down at the line of scrimmage since 2018, the most of any quarterback in the league according to ESPN Stats and Information.

Mayfield said the key will be finding windows in the defense and his line preventing defenders from getting their hands up.

The NFL is placing an added emphasis on defensive holding, as Panthers second-year cornerback Jaycee Horn found out the hard way. The No. 8 pick in the 2021 draft was called twice for holding against the Browns, allowing two drives to continue.

Horn, who played three games as a rookie before a season-ending foot injury, has had an issue with holding calls in college at South Carolina because of his physicality. The Panthers want him to stay aggressive, but are working to limit his penalties.

Wide receiver Sterling Shepard is the longest-tenured player on the Giants and the only one who was with the team that started 2-0 in 2016.

“Everything is better when you win and I told the guys that because a lot of them weren’t here whenever we were winning games," Shepard said.

The Giants' coach that year was Ben McAdoo. He is now the Panthers' offensive coordinator.