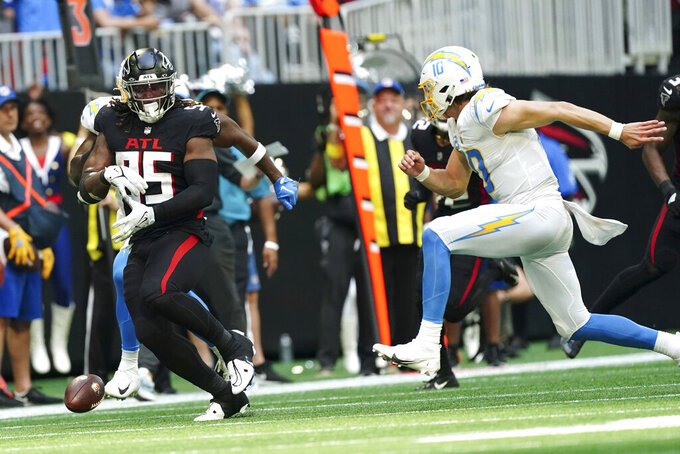 ATLANTA (AP) — If Ta’Quon Graham could do it all over again, he would’ve just fallen out of bounds.

Instead, the 6-foot-4, 320-pound defensive tackle had to wonder what might have been if he hadn’t lost his first career fumble return that set up Cameron Dicker’s 37-yard field goal and sent the Atlanta Falcons to a 20-17 loss to the Los Angeles Chargers on Sunday.

It appeared Graham initially had saved the day for Atlanta (4-5) with the game tied 17-all in the final minute and the Chargers driving. Linebacker Rashaan Evans poked the ball away from running back Austin Ekeler at the Falcons’ 20-yard line, and Graham quickly picked it up.

The second-year player rambled up the right sideline for 19 yards, only to drop the ball as he was going for more. Los Angeles guard Matt Feiler fell on the ball at the Atlanta 43, and all of Graham’s hard work went for naught.

“We pick up all loose balls, so I picked it up and ran with it,” Graham said. “I kept it in my right arm going down the sideline, and it just slipped out. It’s just one of those football plays I didn’t make."

The game ended at the final buzzer as the Falcons, who began the day alone in first place in the NFC South, missed a chance to move above .500 for the first time since the end of 2017. Atlanta was coming off an overtime victory against Carolina and now must get itself together in time for a rematch with the Panthers on Thursday.

"You put in a lot of work all week, you have so much confidence going into it and you just have to give them credit," left tackle Jake Matthews said. “They just made more plays than we did at the end. There’s stuff we can fix. Our future is still bright. We’ll clean it up and go from there.”

The Falcons got off to a hot start, jumping ahead 10-0 as they averaged 6.9 yards per play in the first quarter. After the Chargers went up 14-10 in the second, Atlanta took a 17-14 lead in the third when Cordarrelle Patterson ran over linebacker Drue Tranquill at the goal line on a 3-yard run, his second score of the game.

Patterson had missed the last four games recovering from knee surgery, and his return sparked a rushing attack that finished with 201 yards rushing on 5.7 per carry. He also had a 38-yard TD run nullified by a tripping penalty on right tackle Kaleb McGary early in the third.

Rookie receiver Drake London was the next man up to make a big mistake for Atlanta, catching a short pass at the LA 6 that was stripped away by linebacker Khalil Mack, who ran the ball back 44 yards.

Second-year safety Richie Grant bailed London out, though, with an interception of Justin Herbert at the Falcons’ 37 to set up Patterson’s second score.

Atlanta missed a chance to push the lead to 20-14 in the opening minutes of the fourth when Younghoe Koo’s 50-yard field-goal attempt hit the right upright.

Graham blamed himself for what unfolded at the end of the game.

“My teammates tell me it’s OK, but I’m probably the hardest on myself, so I should’ve held on to the ball,” he said. “Probably should’ve fell on it. Probably should’ve gotten out of bounds. All of the above, so now I have to move on from here.”