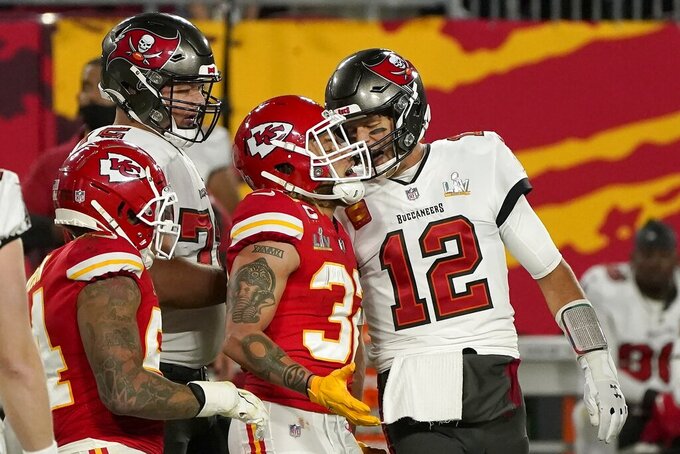 One came out of retirement, another emerged from football purgatory and a third was plucked from limbo-land.

Rob Gronkowski, Antonio Brown and Leonard Fournette, all stars elsewhere before taking different paths and teaming up together in Tampa Bay.

Brought to the Buccaneers by the lure of Tom Brady, they each ended up in the end zone Sunday night in a 31-9 Super Bowl romp over the Kansas City Chiefs.

“It’s hands down one of the greatest accomplishments in sports history," Gronkowski said.

Gronkowski caught two touchdown passes and Brown snagged another as the Bucs built a 21-6 halftime lead. Fournette bolted 27 yards for a score midway through the third quarter that left little doubt how this game would turn out.

Brady wound up with his seventh NFL championship and was the Super Bowl MVP for the fifth time.

“All week he made us believe we were going to win,” Fournette said. “He was texting us at 11 o’clock at night: ‘We will win this game.’ And we believed in him, we believed in the plays the coaches were calling and we just ran with it.”

Brady, naturally, tossed the credit to his teammates.

“It’s great to see big-time players making big-time plays,” he said. “Just love what they did, what they added to the team. Gronk’s an unbelievable player, teammate, talent, work ethic, commitment. And A.B. is just, since he got here he’s just done everything the right way. So, I’m so impressed by him, proud of him.”

Gronkowski came out of retirement and signed with the Buccaneers after Brady left the Patriots last spring for a two-year, $50 million contract in Tampa after dominating the AFC for two decades.

Brown, who had a one-game cameo for the Patriots last season and was briefly Brady's housemate in New England, reunited with him in Florida at midseason after serving an eight-game suspension for violating the NFL’s personal conduct policy, one of several missteps for the star receiver.

Fournette was another castoff, waived by the Jaguars last summer. Looking like his old self, he starred for the Bucs throughout the regular season and the playoffs.

Fournette piled up 135 scrimmage yards Sunday night and joined Hall of Famer Terrell Davis (1997 season) as the only players to score in four playoff games in a single postseason.

“He was amazing and just did it all: blocked, ran, just had an incredible season,” Brady said. “We got him pretty late and he just showed up big. It was amazing, just how he performed in the biggest moments.”

While Brady's bunch took care of things on offense, Shaquil Barrett, Ndamukong Suh and the rest of the Bucs' star-studded defenders harassed Patrick Mahomes relentlessly in handing the Chiefs young superstar the worst loss of his spectacular NFL career.

“It's complementary football, baby,” said linebacker Devin White, who led the Bucs with a dozen tackles and intercepted Mahomes in the end zone. “They hold it down on their side; we hold it down on our side. And at the end of the day we've all got the same color jersey on, we've all got he same letters on the front of our jersey and we play for one another.

“So, it doesn't matter who got he job done, who's night it was, just knew we came through to get a win. That's all that matters.”

The Patriots and Bill Belichick fell to 7-9 in 2020, the same record the Bucs had the year before Brady's arrival in Florida as the biggest free agent since his buddy Peyton Manning left the Indianapolis Colts for the Denver Broncos in 2012.

Barrett won it all with Manning in Denver and Brady in Tampa and he said both veteran QBs were similar in their dogged determination to lead their new teams to the top.

“There's nothing else to be said," Barrett said. "There's nothing that he can't do: new team, new scheme, first year with a new team and going to the Super Bowl and winning it all. He's the G.O.A.T for sure.”