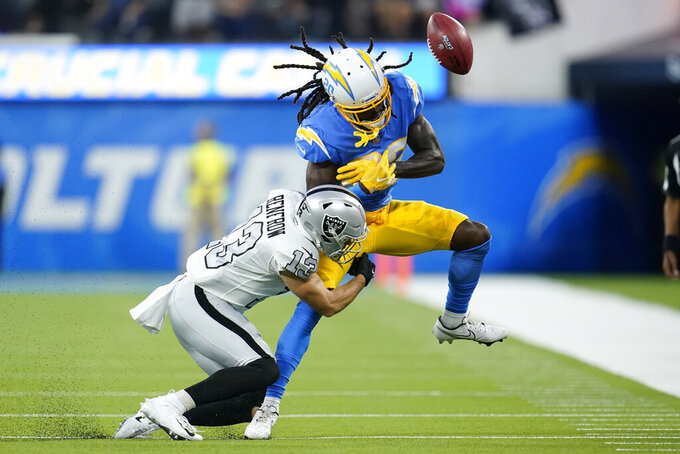 INGLEWOOD, Calif. (AP) — Justin Herbert and the Los Angeles Chargers came into their showdown against the Las Vegas Raiders after a signature win on the road at Kansas City.

In front of a prime-time audience on Monday night, the Chargers showed they are indeed for real.

Herbert threw for three touchdowns, Austin Ekeler rushed for a career-high 117 yards and scored twice as the Chargers knocked the Raiders from the unbeaten ranks with a 28-14 victory.

Los Angeles is 3-1 for the first time since 2014 and part of a three-way tie atop the AFC West with Las Vegas and Denver. The Raiders' loss means the Arizona Cardinals are the NFL's lone undefeated team after four weeks.

“We stayed patient, I thought we had a good mix of the run and pass. Justin was extremely patient and Austin came alive tonight,” Chargers first-year coach Brandon Staley said.

Herbert accounted for all of his TDs in the first half as the Chargers built a 21-0 halftime lead. The Raiders scored on their first two possessions of the second half to draw within a touchdown, but Ekeler gave Los Angeles some breathing room with an 11-yard run scoring off left guard. Herbert had the key play of the drive with a 13-yard completion to Jared Cook on fourth-and-2 from midfield.

The reception by Cook was one of two fourth downs converted by the offense and four on the season.

“He picks and chooses the right time to be able to do it. Sometimes on critical downs, especially when we have the momentum and we’re driving, and maybe when he feels like we need points," said Cook, who had six catches for 70 yards and a touchdown. "He’s been choosing great. We might as well play some lottery numbers with coach.”

Herbert achieved a pair of milestones in the win. He completed his 500th pass in his 19th start, becoming the first quarterback in the Super Bowl era to reach that mark before his 20th start. He has accounted for 10 TDs in his first three prime-time games, tying Patrick Mahomes and Dan Marino.

Derek Carr was 21 of 34 for 196 yards with two TDs and an interception. The Raiders could manage only 48 yards rushing against a Chargers defense that was last in the league in run defense.

“We cannot come out and take that many punches in the first round,” coach Jon Gruden said. “We found a way to make it a football game and give ourselves a chance, but it’s just too hard in this league against good teams.”

The Chargers took the opening kickoff and went 75 yards in 12 plays, including a 4-yard bullet to tight end Donald Parham in the back of the end zone to put them on top 7-0.

Los Angeles extended its lead to 21-0 at halftime by scoring on the final two drives of the first half — Herbert's 10-yard TD to Cook and a 14-yard screen to Ekeler.

Las Vegas was held to one first down and 51 net yards in the first half, but made adjustments at halftime. The Raiders took the third-quarter kickoff and scored when Carr found Hunter Renfrow for a 10-yard touchdown.

Darren Waller then drew them within 21-14 when he caught a 3-yard pass with 1:44 remaining in the third.

“If anything, hopefully this wakes us up a little bit. I think we need to start a lot faster, if I’m honest,” Carr said. “We started the season great, but we don’t start games nearly good enough yet.”

SoFi Stadium has a roof over it, but the start of the game was delayed 35 minutes due to lightning strikes in the area. The stadium is classified as open-air due to the north side being open on the upper deck. Torrential rain hit the Los Angeles area nearly an hour before kickoff.

“I've never had an indoor stadium with a lightning delay. This is a bizarre night for all of us,” said Gruden, who added he didn't receive an explanation for the delay.

Joey Bosa recorded his 50th career sack during the first quarter when he brought down Carr for a 9-yard loss. Bosa, who is in his sixth season, reached it in 67 career games, faster than any Chargers player since sacks were kept as an official stat in 1982.

However, Bosa was not happy about receiving an unsportsmanlike conduct penalty during the fourth quarter.

“I didn’t even know they called the penalty on me because I was fuming, but, I mean, refs are blind. Simple. I’m sorry, but you’re blind. Like open your eyes and do your job, it’s so bad, unbelievable,” he said. “Obviously, that’s on me. I should never lose my control like that. But these guys have got to do a better job because it’s been years of terrible, terrible missed calls, left and right."

Raiders: Cornerbacks Damon Arnette (groin) and Trayvon Mullen Jr. (foot) were injured during the first quarter and did not return. Cornerback Nate Hobbs suffered a concussion in the second half.