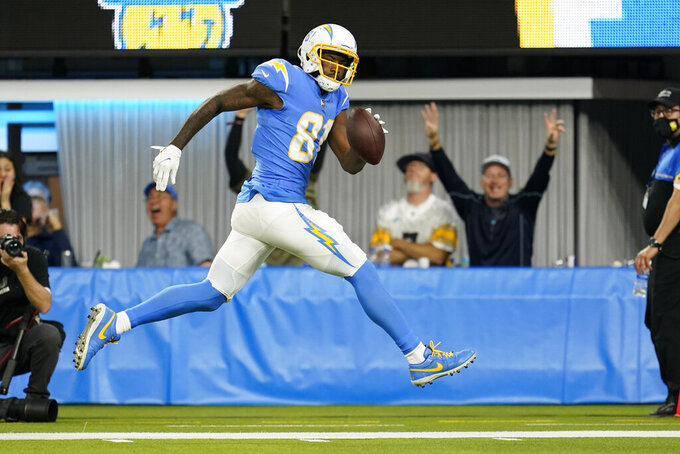 INGLEWOOD, Calif. (AP) — Justin Herbert and the Los Angeles Chargers had the uncanny knack of blowing double-digit leads and losing in the last minute.

Herbert threw a 53-yard touchdown pass to Mike Williams with 2:17 remaining as the Chargers rallied to hold off the Pittsburgh Steelers 41-37 despite blowing a 17-point lead at the beginning of the fourth quarter.

Five of the Chargers' six wins this season have been fourth-quarter comebacks. Last season, they lost five times when leading in the fourth.

“We had our best stuff at the end," first-year coach Brandon Staley said. "I feel like we’ve shown real stuff through 10 games. I’m really proud of this group. This game was one of my favorites, for sure.”

Herbert is the fifth quarterback in NFL history to throw for at least 300 yards passing and have at least 90 yards rushing in the same game. He passed for 382 yards and rushed for 90, the most by a Chargers QB in a game.

“We did a great job moving the ball and answering back when we needed to,” said Herbert, who completed 30 of 41 passes. “It got a little too close for sure. We had our opportunities to put it away. The defense did a great job coming up with stops and then we put points up on what was a huge day for us.”

Los Angeles (6-4) had a 27-10 lead going into the fourth quarter before the Steelers (5-4-1) rallied to take a 37-34 lead on Chris Boswell's 45-yard field goal with 3:24 left. Los Angeles took over at the 25 and scored four plays later when Herbert found Williams between the cornerback and safety. Williams, who had 97 yards on five catches, caught the ball at the Steelers 36-yard line and went untouched up the left sideline.

“We originally called an out route to Keenan, but the cornerback was covering the flat really hard. Justin told me to be ready. I was open and ran straight to the end zone,” said Williams, who had five receptions for 97 yards.

Austin Ekeler had a career-high four touchdowns and 115 scrimmage yards (65 receiving, 50 rushing). He's the ninth player in the Super Bowl era with at least two rushing and two receiving scores in a game.

The Chargers generated 533 yards of offense, their fourth-most since 2000. It is also tied for the eighth-most the Steelers have allowed in a game in franchise history.

“I thought we had them,” said Steelers receiver Diontae Johnson, who had seven catches for 101 yards. “But it’s football. Stuff is going to happen, and we didn’t respond like we were supposed to.”

Ben Roethlisberger passed for 273 yards and three touchdowns for Pittsburgh after missing last week's game against Detroit because he tested positive for COVID-19. Najee Harris was held to 39 yards and a TD.

Roethlisberger described the challenges he had in trying to prepare over the past week.

“It is tough not getting practice perspectives, not watching practice from behind,” he said. “It’s different watching it on film at night. It’s definitely a different process, but we got through it.”

Two of Pittsburgh's scores during its rally came off Chargers' mistakes. Harris scored on a 1-yard run to get the Steelers to 27-20, four plays after Miles Killebrew blocked Ty Long's punt and it rolled out of bounds at the LA 3.

Ekeler put the Chargers back up by two scores with his fourth score of the game before the Steelers scored 17 straight points to take the lead. Roethlisberger connected with Eric Ebron for a 5-yard TD to draw them ton 34-27. On the ensuing drive, Cameron Sutton picked off Herbert's pass intended for Allen and returned it to the 10. Pat Freiermuth tied it three plays later on a 5-yard TD run.

After Williams' go-ahead score, Pittsburgh took over at the 25. Roethlisberger was sacked twice and the Steelers eventually turned it over on downs at the 3, where the Chargers ran out the final 1:15.

The Chargers scored on their first five possessions for the first time since 2017 against Washington. Ekeler ended three of the drives with TDs, and put Los Angeles on top 7-3 with a 6-yard carry off left tackle.

Ekeler extended the lead to 14-3 with 3:42 remaining in the second quarter with a 10-yard reception on a check-down from Herbert. His best play of the night though came on his third TD, when he took a screen from Herbert, juked Steelers' cornerback James Pierre, broke a tackle by Terrell Edmunds and then dragged Taco Charlton the last 3 yards into the end zone to make it 24-10 three minutes into the third quarter.

“It was definitely a special night. I was able to take advantage of what I had in front of me and, you know, ended up getting it in the end zone,” he said.

In a pool report, Senior Vice President of Officiating Walt Anderson said “It just didn’t look like it rose to the level of a foul that would result in a disqualification.”

Heyward said there was nothing malicious and that “I don’t think that I was trying to punch him, but I know it looks more worse than it is in slow motion.”

Herbert said he did not take offense over the play.

Steelers: TE Eric Ebron couldn’t return with a knee injury. ... OL J.C. Hassenauer injured his pectoral muscle and will be re-evaluated. ... DB Arthur Maulet injured his neck and did not return, according to coach Mike Tomlin.

Steelers: At Cincinnati on Sunday.

Chargers: At Denver on Sunday.