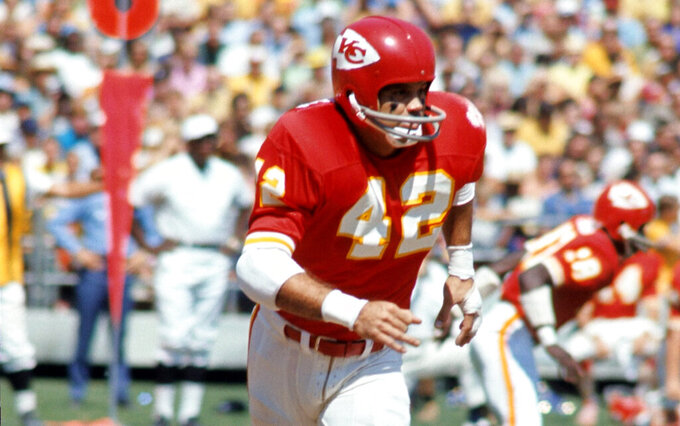 FILE - In this undated photo, Kansas City Chiefs football player Johnny Robinson is shown. Robinson will be inducted into the Pro Football Hall of Fame in Canton, Ohio on Aug. 3, 2019. (The Kansas City Star via AP) 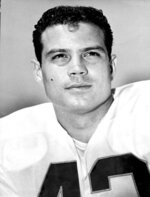 KANSAS CITY, Mo. (AP) — It seemed that one by one, members of the only Kansas City Chiefs team to win the Super Bowl would get a phone call or a knock on the door letting them know they had become Hall of Famers.

The quarterback, Len Dawson. The linebackers, Bobby Bell and Willie Lanier. Even the coach, Hank Stram. Eight in all from the team that beat the Vikings in Super Bowl IV were enshrined in Canton, Ohio.

Now there are nine.

Johnny Robinson, the former LSU standout-turned-star safety during the years of the AFL-NFL merger, was chosen by 48 selectors after being nominated by the Hall of Fame's seniors committee. Robinson was passed over six times during the 1980s but will finally get to slip on that famous gold jacket.

"I'm thrilled," he said in a statement. "I can't tell you how pleased I am to have been selected."

Robinson declined interview requests through a Chiefs spokesman, but his induction still echoed through the halls of their team facility. He is the sixth defensive starter from the 1967 AFL championship team headed to Canton, joining Curley Culp, Buck Buchanan and fellow defensive back Emmitt Thomas, along with Bell and Lanier.

He shined during that Super Bowl victory in 1970, too.

The Chiefs led the Vikings early in the second quarter when Robinson was in position to pick up a fumble that scuttled Minnesota's drive. Then in the fourth quarter, he had one of three interceptions of Joe Kapp and Gary Cuozzo that helped them seal the 23-7 victory.

It remains the last Super Bowl appearance by the Chiefs.

"We are thrilled that Johnny Robinson will be enshrined in the Pro Football Hall of Fame," team chairman and CEO Clark Hunt said in a statement. "Johnny was part of the foundation of the Super Bowl 4 championship team and was one of the best defensive backs of his generation."

Truthfully, he might have been an even better tennis player.

Robinson's father, Dub Robinson, spent four decades coaching tennis at LSU, where his precocious youngest son enrolled after a memorable three-sport prep career. Robinson teamed with his older brother, Tommy, to win a national boys junior tennis championship, and they continued to win after teaming up again for the Tigers. Johnny won an SEC singles title and together they won a doubles crown.

Meanwhile, Robinson had emerged as one of the biggest stars on the Tigers' football team, joining Louisiana locals Billy Cannon — the 1959 Heisman Trophy winner — and Warren Rabb in the backfield. In fact, Cannon and Robinson were so talented that innovative coach Paul Dietzel overhauled his offensive system and implemented the Wing-T so their talents could be maximized.

They were unranked at the start of the season, soared up the AP poll and defeated Clemson in the Sugar Bowl on New Year's Day to cap an unbeaten season with a national championship.

Robinson was drafted twice in 1960, by the Detroit Lions in the NFL and the Dallas Texans in the AFL. He wound up in Dallas and helped the franchise beat the two-time defending champion Houston Oilers to win the AFL title in 1962, then followed the rechristened organization to Kansas City in 1963.

He became one of 20 players to play all 10 seasons of the AFL, then left an indelible mark on the NFL. He finished his career with 57 interceptions in a decade playing safety, earned a spot in seven Pro Bowls, received all-league recognition five times and was chosen to the AFL's all-time team.

What Robinson, now 80, accomplished after his playing days has been just as important.

After hearing the plight of a young boy at church, Robinson purchased a home in Monroe, Louisiana, and established Johnny Robinson's Boys Home for at-risk youth. It has grown from an endeavor launched on a whim into a house that has more than two dozen full-time employees and houses 30 boys and young men.

It has been his life's work for much of the past four decades, through the 1985 death of his own son, Tommy, and the numerous health problems Robinson has battled through the years: arthritis in his spine, thyroid cancer, non-Hodgkin lymphoma, a quadruple bypass and a severe stroke.

He has acknowledged over the years that some of his issues may stem from his days playing football.

Those health concerns are the reason he has remained out of the public spotlight in recent years, and why he asked members of the Chiefs' communications team to politely decline interview requests.

"Our family and the entire Chiefs organization are delighted for Johnny and his family," Hunt said. "At long last, he will take his rightful place among the greatest to ever play the game, in Canton."