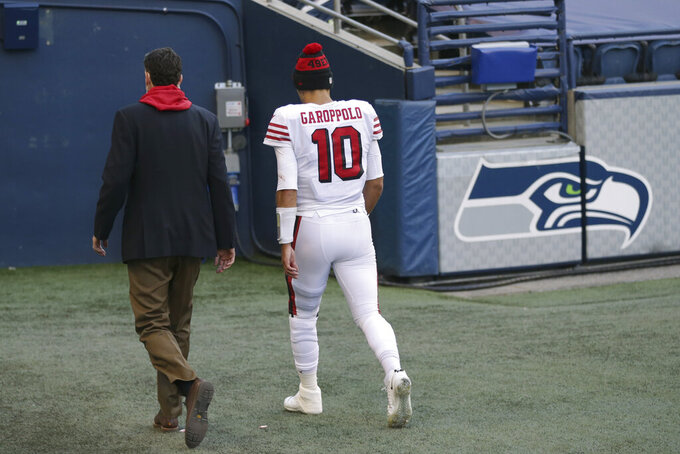 San Francisco 49ers quarterback Jimmy Garoppolo (10) walks to the locker room during the second half of an NFL football game against the Seattle Seahawks, Sunday, Nov. 1, 2020, in Seattle. (AP Photo/Scott Eklund)

SANTA CLARA, Calif. (AP) — The San Francisco 49ers heard all about the Super Bowl runner-up curse before the start of this season.

Only a handful of teams had ever made it back to title game a year after losing it, but the Niners felt they had the ingredients to buck that trend.

That’s only a partial list of the injuries for San Francisco and a major reason why the Niners (4-5) find themselves in last place in the tough NFC West with dwindling playoff hopes.

“You go into this year and you expect to be right there because of how we finished last year and the team that we had, but each year is a new year,” coach Kyle Shanahan said. “We know the challenges that we have had. I think there’s a number of games that we could have won that we didn’t. I know it doesn’t get easier with some of the guys we’ve lost, but hopefully we’ll get some guys back here going forward.”

The Niners are hoping to get Mostert and Samuel back this week against New Orleans, but may have to wait longer for some more of their stars to return. They know that they need to perform better than they have so far if they want to make a playoff run down the stretch.

“I don’t care what the situation is. I told the guys we just have to look in the mirror, it doesn’t matter who’s down, who’s on COVID, it’s a wild year, obviously, with injuries in the NFL,” linebacker Fred Warner said. “But we still have a lot of great football players on this team, and we just have to get back to work and make sure we compete at a high level next game.”

Shanahan’s play calling. Despite being forced to play significant time without nearly all of his starting offensive skill position players, Shanahan has been able to coax solid production out of the group nearly every week. Whether it was his use of shovel passes that contributed heavily to a win over the Rams when Garoppolo barely threw the ball past the line of scrimmage, or a creative running game that carved up New England with backup Jeff Wilson Jr. carrying the load, Shanahan has solidified his reputation as one of the game’s best play callers.

Pass blocking. The Niners have allowed 23 sacks already, outpacing last year’s rate that led to only 36 for the entire campaign. New left tackle Trent Williams has filled in well for Joe Staley outside of a few lapses, but right tackle Mike McGlinchey has struggled in pass protection and the interior of the line has given up way too much pressure, including the hit that led to Garoppolo’s original ankle injury in Week 2.

Fred Warner. Despite all the injuries, the defense has mostly held up thanks in large part to the play at middle linebacker from Warner. Defensive coordinator Robert Saleh said earlier this season he feels he always has a chance if Warner is out there and the third-year pro is an emerging star. He’s outstanding in coverage, strong against the run and able to blitz as one of the game’s most versatile linebackers.

Garoppolo. Garoppolo hoped to put the fourth-quarter Super Bowl collapse behind him and establish himself as the long-term answer in San Francisco. Instead, the injuries and spotty play have led to questions whether he’ll be the starter in 2021. Garoppolo’s numbers are down across the board, with his yards per attempt (7.8), passer rating (92.4) and touchdown to interception ratio (1.4) the most notable drops from 2019.

The Niners hope to get back Sherman after their Week 11 bye, as well as possibly centers Weston Richburg and Ben Garland, defensive end Ronald Blair, and running backs Tevin Coleman and Jeff Wilson Jr. There’s still hope for Garoppolo to return in December because he didn’t need surgery on his injured right ankle, but it’s less likely that Kittle or Dee Ford will come back this season, and Bosa and Solomon Thomas are out for the year.

46 — The 49ers have started 46 players so far through nine games because of all the injuries. That’s the third-most players to start a game for San Francisco since the merger and there are still seven games to go. The Niners started 47 players in 2005 and 69 in 1987, which was inflated because of three games with replacement players.