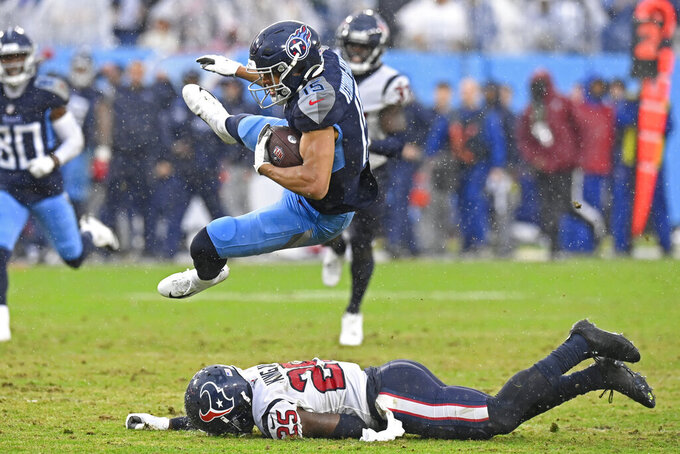 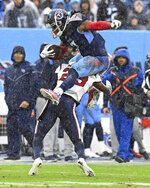 The receiving corps Ryan Tannehill and the Tennessee Titans thought they'd have this season currently is a thin, patchwork group as they prepare to visit the New England Patriots on Sunday. The quarterback is busy working to make sure everyone is on the same page — quickly.

“It’s hard, no doubt about it,” Tannehill said. “We have to communicate really, really well. Be on the same page in the film room and the installs and make sure we are communicating everything clearly. Communicating exactly what I am expecting. If we do get some full speed reps, taking advantage of every rep we get.”

Brown, the Titans' leading receiver and a 2020 Pro Bowler, left last week's loss to the Texans in the third quarter and hasn't practiced all week. He was declared out Friday. Johnson hurt his right hamstring early in that game a week after catching five passes for 100 yards, and was added to injured reserve Tuesday.

Running back Jeremy McNichols, second on the team with 25 receptions, also will be out for a second straight game with a concussion.

Nick Westbrook-Ikhine, who went undrafted out of Indiana last year, became the fourth Tennessee receiver to have a 100-yard receiving game this season. He caught seven passes for 107 yards, joining Brown (two), Jones, and Johnson in that category.

The Titans are tied for the most different 100-yard receivers this season with the Buffalo Bills.

On Sunday, the Titans (8-3) likely will start Westbrook-Ikhine and Chester Rogers with rookie Dez Fitzpatrick. They signed veteran Golden Tate to the practice squad Tuesday, adding him to a group including Austin Mack, Cody Hollister and Mason Kinsey as other options to promote for this game.

Coach Mike Vrabel says having Tannehill is critical with the “moving pieces" and notes the quarterback worked with Hollister in training camp. Vrabel said both Westbrook-Ikhine and Rogers have done a lot for the Titans, with Fitzpatrick now starting to get a larger role.

“And that’s just kind of where you are in this part of the season,” Vrabel said.

The 6-foot-2, 211-pound Westbrook-Ikhine has started four games in his young career, three this season. Last week, he became the 15th player that Tannehill has helped produce a 100-yard receiving game in the quarterback's NFL career.

Westbrook-Ikhine says Tannehill does a good job being intentional on game-like reps in practice, talking about situations to get on the same page.

"I’ve been in situations in the game where I’m like, ‘Oh, this is like exactly what Ryan said in practice,’” Westbrook-Ikhine said.

Rogers started in a win over Buffalo in October, the 23rd of his five-year career. Rogers said it's next man up.