Injuries, miscues pile up for Steelers in loss to Raiders 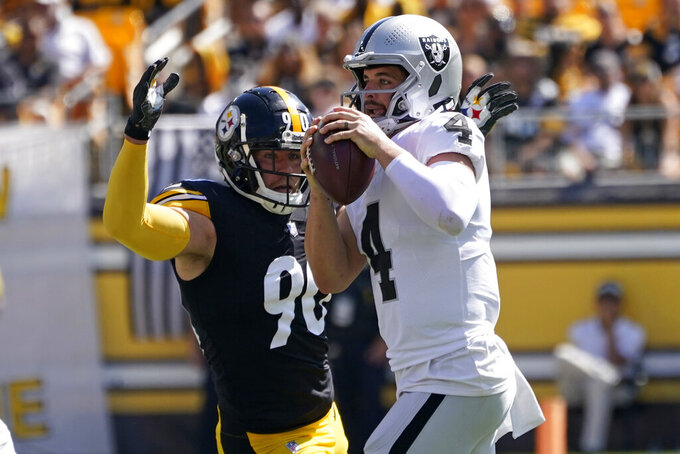 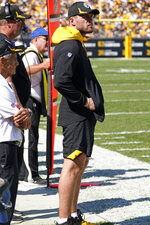 The next the Pittsburgh Steelers star linebacker was watching from the sideline in sweatpants dealing with a groin injury as the Raiders surged to a 26-17 victory that sapped any momentum Pittsburgh gained from a season-opening triumph in Buffalo.

Watt was hardly the only Steeler rendered mere spectator as their record fell to 1-1. Veteran cornerback Joe Haden and inside linebacker Devin Bush were inactive after groin injuries popped up during practice on Friday.

At least they'll return at some point. Defensive tackle Tyson Alualu's season is likely over after the 34-year-old fractured his right ankle on Las Vegas' first possession.

“Injuries are part of the game,” defensive end Cam Heyward said. “It's not anything we can run from. That's what practice is for. ... So hopefully we have guys that are able to step up. I've got to be harder on my guys because we've got to make the plays.”

Pittsburgh didn't make many when it mattered against the Raiders (2-0), particularly after Watt's exit. Las Vegas quarterback Derek Carr threw for 261 yards and two touchdowns in the second half alone, including a 61-yard strike to Henry Ruggs in which Carr had plenty of time to set up and heave the ball 50+ yards in the air.

Steelers safety Minkah Fitzpatrick took the blame for the touchdown, saying he got over too late to help cornerback Ahkello Witherspoon, acquired last month in a trade with Seattle. Fitzpatrick, however, also said lack of experience in the team's system is not an excuse when things go south.

A week after harassing Buffalo quarterback Josh Allen, the Steelers did little to rattle Carr, particularly after Watt went out. Pittsburgh hit Carr just five times on 42 dropbacks. While that number included two sacks — including a strip-sack by Watt in the second quarter and one by newcomer Melvin Ingram — Carr had plenty of time in the second half to pick apart a secondary missing Haden.

"We’ve got to grow,” Steelers head coach Mike Tomlin said. “Win or lose, we’ve got to grow. We’ve got too many young people, new people in significant roles. They’ve just got to grow in terms of understanding those roles, the details required to win, the skills relative to their position to execute in those critical moments.”

One of those skills includes coping. Heyward admitted it was tough to watch Alualu — whom he trains with during the offseason — taken to the locker room on a golf cart with his 11th season likely already over before it really began.

“That hurt,” Heyward said. “To be honest, I wasn't ready for that. ... I've said it before, he's the good cop to my bad cop. He settles the group down and sometimes I can be too high or too low and he brings me back down."

Heyward made it a point to say he wasn't ready to issue the “eulogy” on Alualu's season but acknowledged “we're going to miss him out there on the field."

Alualu is the second defensive line starter who is out, joining Stephon Tuitt, who is on Injured Reserve with a knee injury. The Steelers do have depth along the line in rookie Isaiahh Loudermilk, Chris Wormley and Isaiah Buggs. Yet they are also relatively raw.

“They're going to have to be (ready) and they will be,” Heyward said.

If the Steelers want to hang tough while the retooled offensive line — one that struggled creating any push in the running game and let quarterback Ben Roethlisberger be hit 10 times — they don't really have a choice.

“It's really the ‘next man up’ mentality,” said inside linebacker Rob Spillane, who started with Bush unavailable. “They preach that from Day Zero here. That's a creed we live by.”

One that will be tested next week when Cincinnati visits Heinz Field.