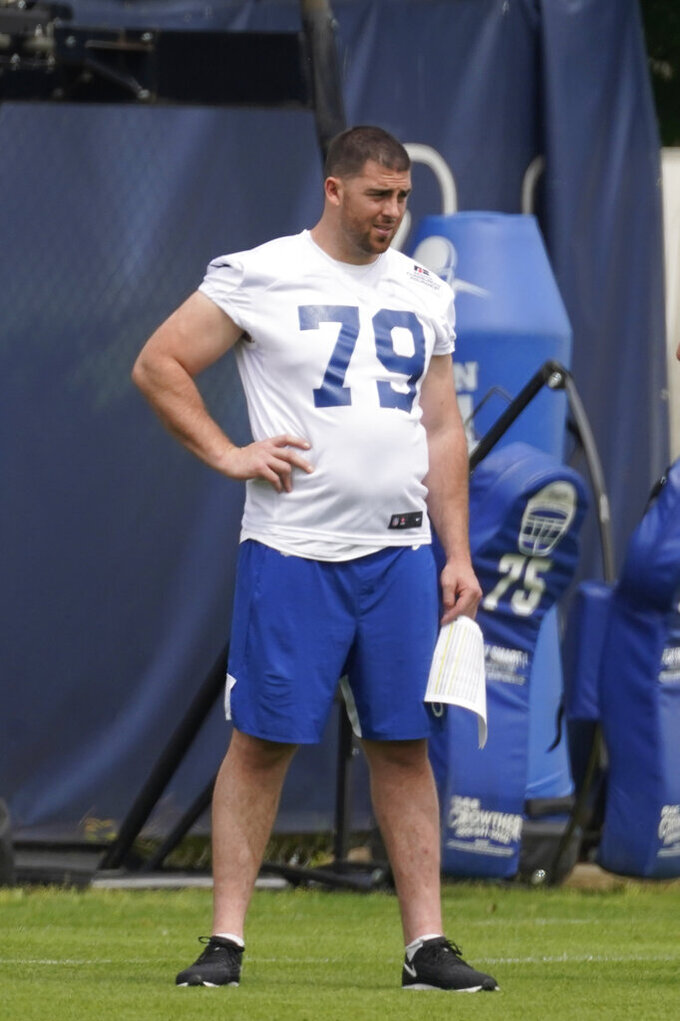 FILE - In this May 27, 2021, file photo, Indianapolis Colts' Eric Fisher watches during NFL football practice in Indianapolis. After eight seasons in Kansas City, he was released in March as a cost-cutting move and spent the next two months uncertain about his future. In May, he finally signed with the Indianapolis Colts. And now, following nearly eight months of rehab, the two-time Pro Bowl left tackle appears to be nearing a return.(AP Photo/Darron Cummings, File)

The two All-Pros look for flaws and tip-offs when they square off.

On Sunday, Nelson will use those lessons in the biggest challenge of his career — playing against three-time Defensive Player of the Year Aaron Donald and the Los Angeles Rams, a matchup between the NFL's best interior brawlers.

“He's a force, he's a one-man wrecking crew,” said Buckner, who saw Donald twice a year before joining the Colts in 2020. “You've got to know where he is at all times. If you leave him one on one with anybody he's going to get his due."

Anybody except, perhaps, Nelson.

Since being selected No. 6 overall in 2018, Nelson has earned three All-Pro selections and allowed just three sacks.

This time could be different, though.

Donald has been the league's top defensive player three of the past four years and needs 1 1/2 sacks to break Leonard Little's franchise record (87 1/2), though he's still chasing Deacon Jones' unofficial record of 159 1/2.

While Donald has a penchant for changing games, as he did with a late sack in last week's victory over Chicago, he may be motivated by coach Sean McVay asking last season's top-ranked defense to stop the run better.

“That’s something we want to be able to do a better job with and taking guys down on first contact," McVay said. "Our standards, and the way that our guys expect to play, we know that it’s going to be a focal point, a point of emphasis and I expect to see improvement in that area from our guys.”

Both players took Wednesday off — Donald as a typical rest day, Nelson because of a sore back that didn't appear to hinder him against Seattle.

It's unclear how many times Donald and Nelson will actually line up across from one another given that Donald split his snaps almost evenly between the left and right side last season.

But when they do, it will be one of the purest matchups in football — one that could dictate the outcome.

Carson Wentz was sacked three times in his Colts debut last week and it won’t get any easier this week.

The Rams have been one of the NFL’s best road teams during McVay’s career, going 23-11 in regular-season games played outside the Los Angeles Memorial Coliseum or SoFi Stadium.

McVay also is 4-0 in road openers, topping the 30-point mark in all four games.

Even as the Rams' road dominance has waned the past two years when they went 9-8, they did beat defending Super Bowl champion Tampa Bay on its home field last season.

Sunday’s matchup brings back memories of one of the strangest trades in sports history.

In 1972, the late Robert Irsay paid $19 million to acquire the Rams franchise from the estate of Dan Reeves and then swapped franchises with the late Carroll Rosenbloom to become the Baltimore Colts' owner. The deal saved Rosenbloom $4.4 million in capital gains taxes, according to The New York Times.

The oddities didn’t stop there.