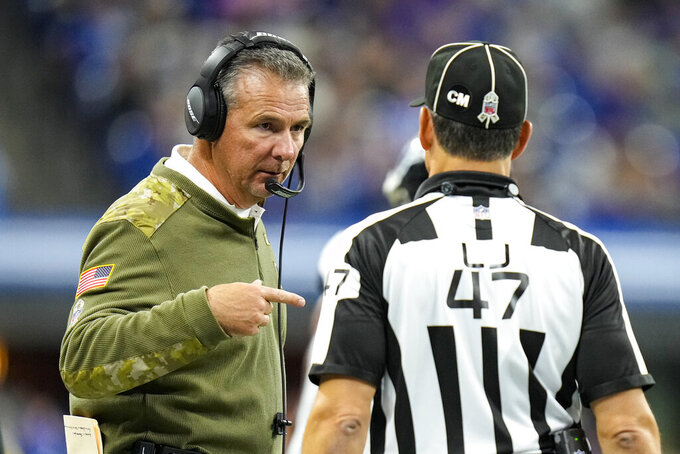 Urban Meyer says he will not be Notre Dame's next head coach.

The Jacksonville Jaguars coach flatly squashed any speculation about his immediate future when asked by The Associated Press on Tuesday about the vacancy at Notre Dame created by Brian Kelly's abrupt departure for LSU.

“I’m not a candidate,” Meyer said on a conference call with the beat writers for the Los Angeles Rams, Jacksonville's opponent on Sunday. “Obviously I spent six years of my life there, so great respect for Notre Dame, and as I do USC, UCLA, like we talked about (earlier in the call). But I’m committed to the Jaguars and doing the best we can to turn this thing around.”

Earlier Tuesday, a person familiar with Meyer's thinking said the 57-year-old coach is fully committed to the Jaguars and has no plans to return to college football. The person spoke to the AP on condition of anonymity Tuesday because Meyer had yet to make his plans public.

The NCAA's one-time transfer rule, the burgeoning transfer portal and outside compensation for the use of an athlete's name, image and likeness have altered college football dramatically since Meyer stepped down at Ohio State following the 2018 season.

Meyer shot down speculation about leaving the NFL for Southern California after the Trojans fired coach Clay Helton in September, and his name was immediately linked to Notre Dame on Monday after Kelly bolted for LSU. Meyer spent five years (1996-2000) as receivers coach in South Bend, Indiana, and even called the Fighting Irish a “dream job" while he was at Florida in 2008.

Meyer was immediately installed as one of the betting favorites to get hired at Notre Dame immediately after Kelly's departure, given his connections to the program and the spotlight involved.

Instead, Meyer says he'll spend this week preparing the Jaguars (2-9) to travel cross-country and play the Rams (7-4) at SoFi Stadium.

The Trojans hired Lincoln Riley away from Oklahoma on Monday. Meyer said earlier this season “there’s no chance” he would take the USC job. He insisted he’s in Jacksonville for the long haul.

“I’m here and committed to try to build an organization,” Meyer said at the time.

No one expected it to be the last time Meyer’s name would be connected to a collegiate job opening. After all, he found success at every stop in his three-plus decades in the college ranks. He built winners at Bowling Green, Utah, Florida and Ohio State. He won two national championships with the Gators (2006, 2008) and another with the Buckeyes (2014).

He stepped down after the 2018 season and spent two years working as a college football analyst at Fox Sports. Jaguars owner Shad Khan persuaded him to return to the sideline in an effort to deliver a consistent contender in Jacksonville.

So far, little has gone right for Meyer. Although the Jaguars ended a 20-game losing streak in London in October, they have dropped three in a row and have scored just 57 points in their past five games.