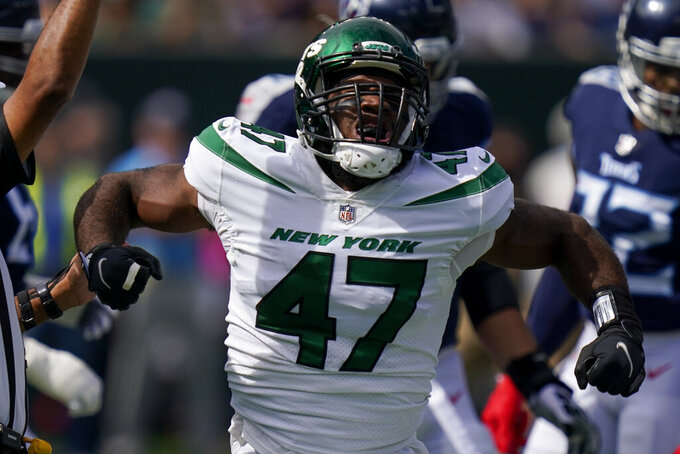 The crafty defensive tackle is low-key off the field and a relentless brawler on it.

“I’m the vet in the room,” the 27-year-old Rankins said with a grin. “I feel like I walk around, you know, it looks like, man, I'm not moving real fast. But the moment I put the pads on, I’m twitched up. I’m powerful, I’m explosive. I've got all the moves."

A Sack Pack, if you will.

“I think each and every week, everybody’s getting more comfortable with being able to allow their superpower, I like to say, to shine,” Rankins said, “but not let it overshadow what the group is trying to conquer as a whole.”

Shepherd compared the D-line to The Avengers during training camp, using The Hulk for himself. Rankins said he and Fatukasi joke all the time about the group's “superpowers” and have fun designating their superhero alter egos.

"Oh, yeah, there's a list," Rankins said. “We'll unveil the list of guys to you in due time, but for now, just bits and pieces.”

Captain America might have been Carl Lawson, but the sack-happy defensive end was lost for the season in training camp. So, the rest of the squad has had to fight on without its fallen leader.

“The veteran leadership in that group and the mindset and the drive and all that has been up there, they’re just about as good as anybody in football in terms of how cool that room is built,” said coach Robert Saleh, who also credited D-line coach Aaron Whitecotton. “But we talk about it all the time with rush and coverage. We’ve got a young secondary back there who is doing everything they can to buy the D-line a hitch on the quarterback, and if that quarterback hitches our D-line is taking a lot of pride in making sure that he gets hit.”

Just as it did last week against Tennessee.

New York had seven sacks and hit Ryan Tannehill a whopping 14 times. Williams led the way with two sacks, Huff had 1 1/2 and Franklin-Myers had one. But the pressure the D-line put on a banged-up Titans O-line helped others get into the backfield, too.

Linebackers C.J. Mosley and Quincy Williams each had a sack, and cornerback Bryce Hall had a half-sack.

“Those dudes, they get after it and they make our jobs in the secondary nice because when they’re doing their thing, it allows us to play really, really good defense,” Hall said of the defensive line. “We appreciate them. We love them for everything that they’re doing.”

It was just the fifth time in the last 10 seasons the Jets had seven or more sacks, and first since also getting that many against Buffalo in 2017.

New York has 13 sacks this season, tying Minnesota for fourth place in the NFL — just two behind league-leading Chicago.

“I think last week showed, obviously, what we can do when we can really pin our ears back and really get after a guy,” Rankins said. "But I think that's only scratching the surface.

“We watch the tape and we still see so many things where it's, if I do this here or if I step here or if I'm thinking this instead of that, things can be a lot more productive for us, which is crazy to think about.”

A little sack history was made, too. With both Quinnen and Quincy Williams getting sacks against the Titans, it marked the first time since the statistic became officially recorded in 1982 that brothers took down a quarterback as teammates in the same game.

“I didn't even know it was a record or anything,” said Quincy Williams, who had a career-high 12 tackles along with his first NFL sack. “After they told us about it, we were like, we were just doing our jobs, which is the No. 1 thing. First of all, I want to credit my defensive line because they kept me clean so I could run around and make tackles.”

“It's a byproduct of, those guys work as hard as any group I've ever been around,” defensive coordinator Jeff Ulbrich said. “Hopefully, we'll just keep building on it.”

NOTES: WRs Denzel Mims (non-COVID-19 illness) and Elijah Moore (concussion) practiced fully and will be available to play Sunday in London. ... Shepherd (knee) and CB Brandin Echols (concussion) were limited after sitting out Wednesday. ... S Adrian Colbert (concussion), TE Tyler Kroft (back) and WR Jeff Smith (concussion) were all ruled out for the game and didn't travel with the team. S Marcus Maye (ankle) had previously been ruled out. ... The Jets released S Jarrod Wilson and then re-signed him to the practice squad. ... C Jimmy Murray was released from the practice squad.