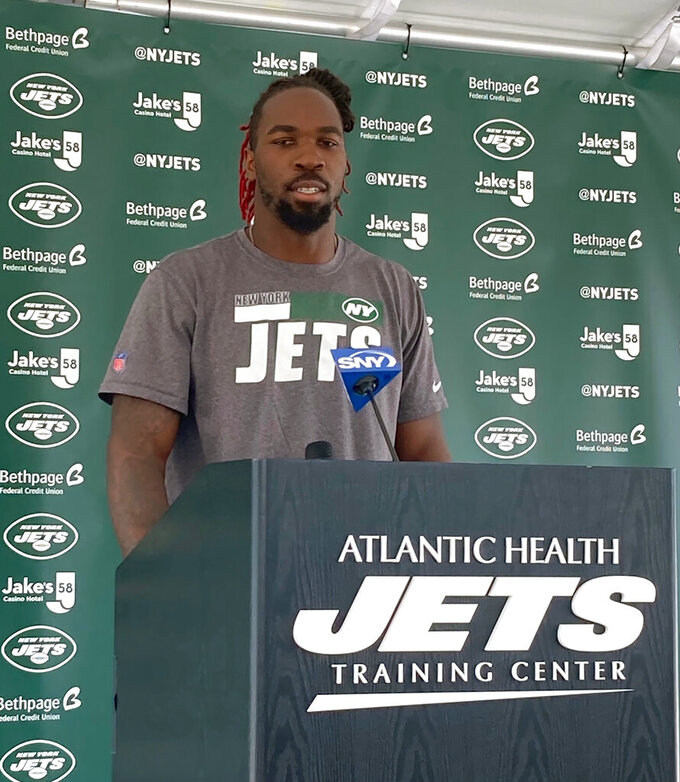 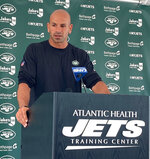 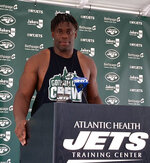 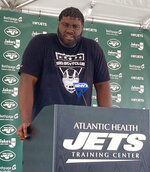 FLORHAM PARK, N.J. (AP) — Robert Saleh and the New York Jets were focused on football again after spending the last several days mourning the loss of their friend, colleague and mentor.

The death of assistant coach Greg Knapp last Thursday stunned the organization and the entire NFL community. But the Jets are preparing to hit the field for their first practice of training camp Wednesday — just as Knapp would have wanted.

Knapp died of his injuries from an accident on July 17 when he was struck by a car while riding his bicycle near his home in California. He was 58.

“There has been a lot of tremendous support not only in the organization, but outside the organization," Saleh said of Knapp, who worked for seven NFL teams in more than 25 seasons. "I know that he'll be with us throughout this entire season."

Knapp was hired by Saleh as the team's passing game coordinator in January, and it was clear he had already made an impact on Jets players and coaches on all sides of the football.

“He meant a whole lot to us,” said left tackle Mekhi Becton, who added that he and defensive lineman Quinnen Williams would often be encouraged by Knapp in the weight room. “I feel like me and Q are going to try to do our best to fulfill our goals.

Added guard Greg Van Roten: "Greg was a guy that you didn't have to be around long to know that he was a special person. He did have this light that he let shine and just attracted people to him."

One of Knapp's primary roles with the Jets was to be an experienced voice for rookie quarterback Zach Wilson, the No. 2 overall pick, to lean on as the team's expected starter.

And all eyes will be on Wilson during camp — once he reports.

The former BYU star still had not signed his rookie contract early Tuesday afternoon, less than 24 hours before his first scheduled camp practice. While Wilson’s contract is slotted, per the NFL rookie wage scale, to be worth $35.15 million over four years and includes a $22.9 million signing bonus, it appears the sides are working out offset language. That practice, shared by most NFL teams, provides clubs with financial protection if they release the player before the end of a contract.

“I've got a lot of faith in Joe (Douglas)," Saleh said of the Jets general manager who is handling the negotiations. “So we'll see what happens in the next couple of hours."

Saleh didn't seem overly concerned about the possibility of the Jets opening camp without Wilson — who was the only player to not report Tuesday — and the young quarterback missing some time on the field.

“It’s something he’ll have to navigate through," Saleh said. “I’ve got a lot of faith in Zach, too. He’s incredibly intelligent and he’s got a tremendous drive. When he does get here, I know that somehow, someway he’ll make up for it."

After missing organized team activities and minicamp with plantar fasciitis, Becton is healthy and preparing to practice Wednesday.

The second-year left tackle looks noticeably slimmer and more muscular than last season, when his weight was a topic of conversation. The 6-foot-7 offensive lineman, listed last year at 363 pounds, wouldn't divulge his current weight. But Becton said he hit his target heading into camp.

“I was good last year,” Becton said. “But I'm trying to be great this year.”

Linebacker C.J. Mosley opted out last season because of family health concerns over the coronavirus pandemic. He missed all but two games in 2019 after signing a five-year, $85 million deal because of a groin injury.

He sparkled for three quarters in the season opener that year against Buffalo, but has played little since and is eager to get back on the field healthy.

“I feel like I'm a better player than what that game was,” said Mosley, whose Jets debut included five tackles and an interception returned for a touchdown. “Honestly, I'm tired of seeing the same highlights for the past two years, so I'm ready to put some new film on tape.”

Defensive end Carl Lawson is excited about his first training camp with the Jets. But he'll also have an eye on the Tokyo Games on Friday night.

Lawson's girlfriend Rachel Dincoff is competing in the discus event for the United States after qualifying for the Olympics by finishing third at the trials this summer in Eugene, Oregon.

NOTES: OT George Fant was placed on the reserve/COVID-19 list. ... S Marcus Maye, DL Folorunso Fatukasi and DE Jonathan Marshall all passed their physicals and will be eligible to practice Wednesday. Maye and Fatukasi were on the non-football injury list. Marshall was on the physically unable to perform list. ... The Jets signed former UNLV DE Jeremiah Valoaga, who has spent time with the Lions, Dolphins, 49ers (with Saleh) and most recently, the Raiders.