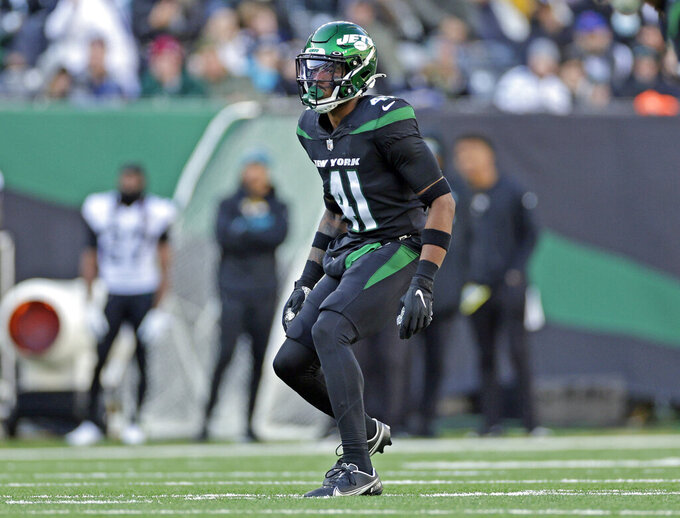 NEW YORK (AP) — Jason Pinnock went from learning a new position to starting at his new spot in a matter of weeks.

So he was unfazed when his coaches came to him a few weeks ago about shifting from cornerback, where he mainly played his college ball at Pittsburgh, to safety on a regular basis because of injuries and illnesses.

“The process was actually kind of fun for me,” Pinnock said. “I was always that long corner, that in-betweener, so it was never anything too new to me or foreign. Yeah, I enjoyed that process, for real.”

Not that it was simple, by any means. Learning the nuances of playing safety after focusing on the “smaller movements in smaller distances and depths” at cornerback took some time getting used to.

“Obviously, if I wasn't good enough to be out there, I wouldn't have been out there,” Pinnock said. “So coming to this point now, yeah, it was pretty smooth for me. I adapted well, but no, it wasn’t smooth at first.”

Pinnock was drafted by the Jets in the fifth round in April as a cornerback, the position at which he grew up in Windsor, Connecticut, watching Darrelle Revis play first at Pitt and then as a superstar for New York. Pinnock had a solid college career during which he not only played cornerback, but also a bit of safety, outside linebacker and special teams.

But he didn't play in the Senior Bowl and received no invitation to the eventually canceled NFL combine.

Pinnock took that personal, saying he was determined to prove what he already knew: He was a pro-caliber player. It's an edge he carries with him that will never dissipate, no matter how much success he has in the NFL.

“Until the cleats hang up,” Pinnock said of that chip on his shoulder, before repeating himself.

The Jets worked Pinnock at safety a little bit during training camp, but it wasn't until the past few weeks that coach Robert Saleh, defensive coordinator Jeff Ulbrich and defensive backs/safeties coach Marquand Manuel decided to make a full-time switch out of necessity.

“Obviously, we drafted him to be a corner, but a lot of guys were in that area,” Saleh said. “We just look at Pinnock — his size, length, speed, his athleticism — we’re like, man, he’d be a really cool free safety, Jimmie Ward-type in our system. So, we’ve only been training him there only for about a month, so I don’t know if we expected him to get thrown out there.”

But New York has been decimated this season at safety with projected starters Marcus Maye and Lamarcus Joyner out for the year with injuries. Five others started at the position before last week, when the Jets lost Ashtyn Davis and Sharrod Neasman to the COVID-19 list, and Elijah Riley to a concussion.

So on Sunday against Jacksonville, Pinnock was out there starting opposite Will Parks, who had just been claimed off waivers from Miami earlier in the week.

“It actually heightened the communication,” Pinnock said of playing at a new spot with a new teammate. "You've got pieces out there who hadn't worked together previously, so it made us communicate way better — louder, more confident — and it was great.

“I'm looking forward to the future.”

Pinnock characterized his rookie season as “sporadic,” but insisted he has learned a lot from playing both at cornerback and safety, as well as being part of the Jets’ special teams unit.

“That just makes me all the versatile that I am,” he said. “So, I’m just glad that they’re using me and I’ll continue to be here.”

Both Pinnock and Parks were among the top-graded Jets players by Pro Football Focus in the 26-21 victory, and Pinnock had four total tackles, a pass defensed and a forced fumble.

He also had a jarring hit — a prototypical, physical safety-type pop — late in the game when he slammed into Marvin Jones Jr. and dislodged the ball to prevent a catch.

“I think the biggest transition for me at corner was being physical,” Pinnock said. “In this league, you've got to do your physicality within 5 yards. So, I didn't like it. I like to hit.”

Not bad for a guy who considered himself a cornerback until just a few weeks ago.

And now? He totally thinks of himself as an NFL safety.