Jets' suddenly porous defense aims to tighten up in a hurry 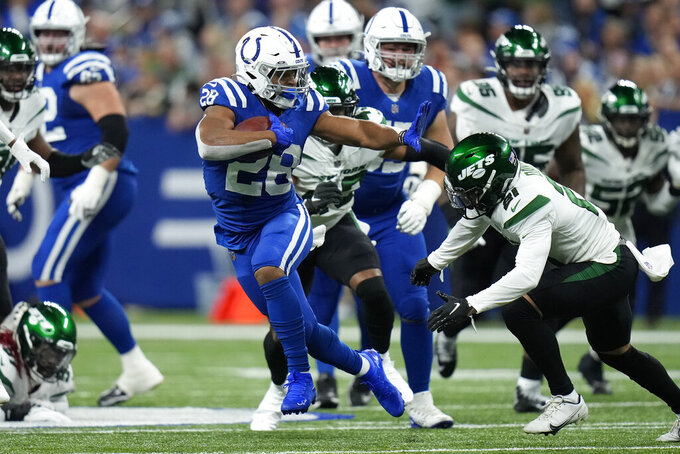 The Indianapolis Colts kept running — up the middle, around the edge and down the field — on Nov. 4. And there was nothing the New York Jets could do about it.

“When the offense is able to run the ball on you, especially the way that the ball got run on us last week,” linebacker C.J. Mosley said, “you definitely take that personal.”

Jonathan Taylor had 172 yards rushing and the Colts finished with 260 yards on the ground, the highest total for any team this season. It was the type of porous performance that would leave any defense angry and desperate for answers.

“I think it’s more embarrassment,” Jets coach Robert Saleh said. “I’d rather see 500 yards passing than 250 yards rushing. It feels different. The run game is a matter of wills, it’s mind over anything. It’s strain and it’s fighting for every gap, it’s fighting for every yard. I think our defensive guys take a lot of pride, the players throughout the NFL have a lot of pride. So to have that happen to them, I think they’re really excited to get back Sunday to get it fixed.”

Next up: Josh Allen and the Buffalo Bills, whose offense ranks 11th in the league in rushing. And that's despite struggling lately in that department so much that coach Sean McDermott publicly criticized his team this week for not being better on the ground.

As far as the Jets are concerned, they don't want the Bills having a get-well performance against them Sunday.

“It all goes back to execution,” defensive lineman Quinnen Williams said.

And that has been a big issue lately for the Jets.

New York has allowed an average of 463 total yards over its last four games. That includes a solid performance in a win over Cincinnati, which had just 318 against the Jets. Two weeks after giving up 551 total yards to New England in a 54-13 loss, New York allowed Indianapolis to rack up 532 — including the 260 on the ground, with 211 of them coming before first contact with a defender.

“It starts with run defense,” defensive coordinator Jeff Ulbrich said. "That's something as a defensive coach — and I know the defensive players on this team — take great pride in, and we did not play the run even close to our standard last week, or the New England week for that matter. So, that’s absolutely being addressed.

“The light has been shone on it. Coaching it tighter, players know that they need to play it better and that’s technique, that’s calls, that’s a little bit of everything. But that’s definitely where the focus has been.”

The fact the defense, particularly the line, was supposed to be a strength makes the struggles even more glaring.

The Jets have a young secondary, especially now with starting safeties Marcus Maye and Lamarcus Joyner out for the season with injuries. The linebackers have been banged up, so the D-line knows it has a responsibility to keep teams contained.

“We have to play more consistent as a defensive line, we understand that,” defensive end John Franklin-Myers said. “It falls on us, and 260 yards is way too much and that just can’t happen in the NFL. I mean, if you want to win, that can’t happen."

New York's pass rush had a coming out party against Tennessee in Week 4 with seven sacks and putting up 13 in the Jets' first four games. The Jets have five sacks since.

It has added up to the worst-ranked overall defense in the league, a unit giving up an NFL-high 31.4 points per game. That mark currently exceeds the worst average in franchise history: 30.9 points per game set in 1975, a team that went 3-11 under Ken Shipp and Charley Winner.

“To a man and a D-line, we all feel like individually we’re good enough to be able to create havoc and wreck games,” defensive tackle Sheldon Rankins said. "So for us to to allow 7 yards before contact, that’s not us. Just having to watch that tape and understand it’s out there and there’s two ways you can go from that.

NOTES: QB Zach Wilson fully practiced for the first time since spraining a knee ligament against New England on Oct. 24. He's listed as doubtful, but won't play. He'll sit at least another week in favor of Mike White. ... OL Chuma Edoga (knee) is doubtful and unlikely to play after not practicing all week. ... RB Tevin Coleman (hamstring), WR Corey Davis (hip), DE Shaq Lawson (hamstring) and LG Alijah Vera-Tucker (toe) all fully practiced and expected to play. ... WR Denzel Mims will miss the game Sunday since he's on the COVID-19 list and had symptoms of the coronavirus. Saleh hopes Mims will be back next week. ... Rookie CB Jason Pinnock, also on the COVID list, had a negative test Friday and could be cleared to play if he tests negative again Saturday.