Jets, Wilson miss chance to assert themselves in Pats loss 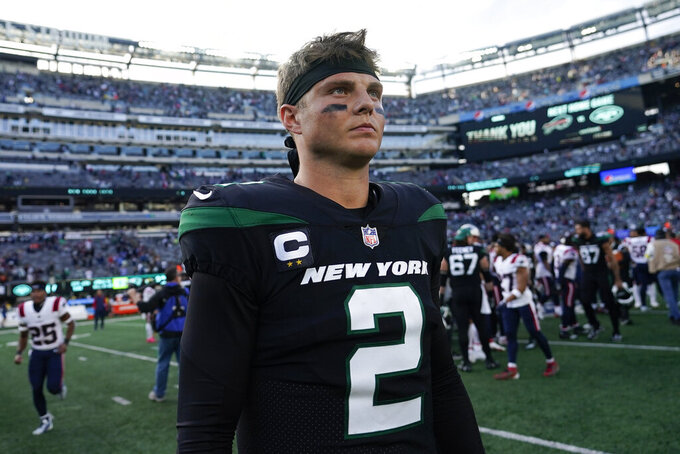 The New York Jets watched the film of their loss to the New England Patriots and the players were left with a feeling that gnawed at them a day later.

They didn't get blown out by their AFC East rivals — far from it. But the 22-17 loss Sunday didn't sit well because they believed the result should have been much different.

It was a chance for the Jets, who were riding a four-game winning streak, to end a 12-game skid against the Patriots and perhaps announce to the league they'll be a factor all season.

"We found a way to lose the game,” linebacker C.J. Mosley said.

And with it, came many of the same doubts that have dogged the Jets throughout their 11-season playoff drought. Critics will say they're pretenders, and not close to contenders. Especially with the way their quarterback played.

Zach Wilson was intercepted three times in his worst performance of the season, despite throwing for a career-high 355 yards. The second-year quarterback has taken most of the criticism, and he acknowledged making some “bone-headed” plays.

“Yeah, that’s true, like, those can't happen,” Uzomah said. "He knows it, we know it as a team, whatever. At the same time, I’m like, yeah, you did make good decisions, you did have really good balls, you did the right things. We as an offense didn’t protect correctly. We didn’t run the right route correctly, things like that.

“Everything’s always going to come back on the quarterback. And he’s the one that has to bear the burden of miscues as an offense as a whole, always. And it’s our job to to make sure that he knows it’s not a one-man game, it’s not a one-man team. It’s a collective that we, as a unit, left plays out there. Not just him.”

Coach Robert Saleh said Monday he never considered pulling Wilson against the Patriots, and reiterated the second-year signal caller will remain the Jets' quarterback and he has “full confidence” in him.

Added Mosley: "Everybody in the building has got his back.”

They have seen good things from Wilson, especially in the Jets' comeback win at Pittsburgh that started their streak. He was more a game manager in the next three victories as New York relied heavily on the run against some stout defenses.

Wilson also had no turnovers in those three wins, and his ability to avoid sacks and keep plays alive have been crucial aspects of the offense's success — and keeping the Jets from “imploding,” as Saleh put it.

“Nobody would've had us at five wins to start the season,” Saleh said. “And Zach's a big part of that.”

The pass rush. The Jets had six sacks of Mac Jones, and all by different players: Quinnen Williams, Carl Lawson, John Franklin-Myers, Jacob Martin, Micheal Clemons and Nathan Shepherd. For the season, they have 21 to rank tied for ninth in the league entering Monday.

New York also had 13 tackles for loss against New England, its most since 2000.

The Jets knew the running game would suffer a bit after the loss of rookie Breece Hall for the season. But offensive coordinator Mike LaFleur will have to try to draw more out of Michael Carter and recently acquired James Robinson to help strike some balance on offense. The Jets ran just 15 times for 51 yards against the Patriots, while Wilson threw 41 passes.

Tyler Conklin. The tight end got off to a good start after being signed as a free agent in the offseason, but had caught just four passes during a three-game stretch. He bounced back with four catches last week at Denver and followed with six receptions for 79 yards and two touchdowns against New England.

Wilson. He's taking heat, and deservedly so, after his performance against the Patriots.

There are some fans and reporters wondering if he'll ever reach the potential that has been expected of him.

“He’s our quarterback because we think he’s going to get better,” Saleh said, "and he's going to continue to prove why he’s the No. 2 pick.”

WR Corey Davis (knee) is day to day after sitting out Sunday. ... Saleh said OTs George Fant (knee) and Max Mitchell (knee) will remain on injured reserve until after the bye week.

10 — That's how many snaps WR Elijah Moore played on offense a week after requesting a trade and being kept home against the Broncos.

He was targeted once against the Patriots and had no catches. Moore was asked about his chemistry with Wilson: “I don’t even know, I couldn’t even tell you,” Moore said. “I don’t get the ball. I don’t know.”

The Jets are back home to take on the first-place Buffalo Bills before having a week off. A victory would again reset the narrative that New York could be a legitimate playoff contender. A loss, however, would give the Jets a lot to think about during the bye.