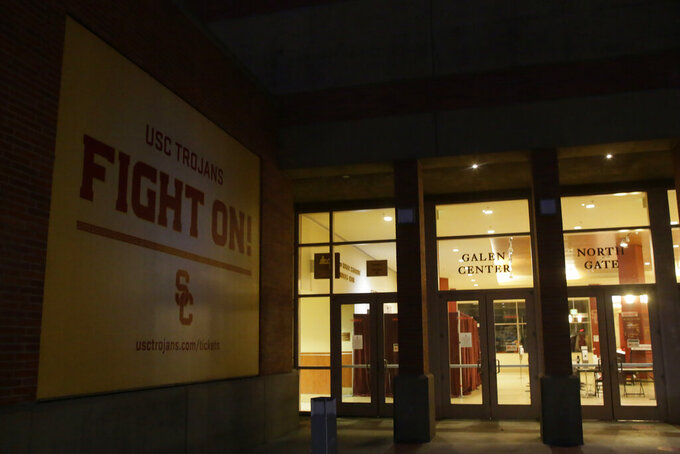 The Galen Arena is closed due to a confirmed case of COVID-19 as the Southern California men's basketball team canceled an NCAA college basketball game against Stanford in Los Angeles, Sunday, Dec. 13, 2020. (AP Photo/Alex Gallardo)

The Arizona Cardinals have placed receiver Christian Kirk on the reserve/COVID-19 list, leaving them without a key offensive player heading into Sunday’s game against the Rams.

Kirk is Arizona’s fourth-leading receiver with 48 catches for 621 yards and six touchdowns.

The Cardinals need to beat the Rams to earn a playoff spot.

The Dragons were scheduled to host UNCW on Saturday and Sunday.

A positive test occurred in the Seahawks’ program.

A decision on rescheduling the games will be made at a later date.

The Dallas Cowboys say three assistant coaches won’t make the trip to New York for the regular-season finale against the Giants after the club had already placed two players on the COVID-19 reserve list.

The winner between the Cowboys and Giants on Sunday can win the NFC East and host a playoff game if Washington loses to Philadelphia later in the day. Washington makes the playoffs with a win.

The Cowboys have managed to avoid any significant COVID-19 issues. The biggest was quarterback Andy Dalton missing a game after testing positive.

No. 6 Wisconsin’s scheduled men’s basketball game Sunday at Penn State has been postponed.

The two schools have announced that they’ve mutually agreed to postpone the game due to health and safety concerns. Neither school offered specific details.

Both schools are working with the Big Ten to reschedule the game.

The team says his duties will be assumed by the offensive coaching staff.

The move comes after star running back Alvin Kamara tested positive for COVID-19 and was ruled out of the season finale.

The moves leave the Saints very thin in the backfield and at safety as they try to secure the top seed in the NFC and the home-field advantage that goes with it.

The Atlantic Coast Conference announced that the women’s basketball game featuring Florida State at Wake Forest scheduled for Sunday has been postponed.

Saturday’s men’s game featuring No. 20 Duke at No. 18 Florida State also was postponed due to a positive COVID-19 test in the Florida State program, as well as contact tracing and other protocols.

The FSU men are scheduled to travel to Syracuse on Wednesday to face the Orange, who have been on an extended pause.

A pair of weekend men's hockey games between Sacred Heart and Army have been postponed due to COVID-19 concerns within the Sacred Heart program.

No make-up dates have been announced for the home-and-home, which was slated for Sacred Heart on Saturday and West Point on Sunday.

The Pittsburgh Steelers have placed cornerback Joe Haden, tight end Eric Ebron and reserve linebacker Cassius Marsh on the reserve/COVID-19 list, putting their status for the playoffs in jeopardy.

The team announced quarterback Ben Roethlisberger, outside linebacker T.J. Watt, defensive end Cam Heyward, center Maurkice Pouncey will not make the trip to give them additional rest ahead of the postseason. Kicker Chris Boswell and safety Terrell Edmunds are also out due to injury.

To provide some depth, the Steelers promoted offensive Anthony Coyle and wide receiver Deon Cain to the active roster and elevated Wright and tight end Kevin Rader and Wright to the from the practice squad as COVID-19 replacements.

Per NFL COVID-19 protocols, a player placed on the reserve list due to contact tracing can return after five days provided they continue to test negative. A player who tests positive for the novel coronavirus but does not show symptoms needs to wait 10 days to return to football activities or test positive twice within a 24-hour period. A player who tests positive and is symptomatic must wait at least 10 days from the time symptoms first appeared, and at least 24 hours since last experiencing symptoms before returning to football activities.

Both head coaches were absent when the No. 7 Baylor women played at TCU on Saturday.

TCU said coach Raegan Pebley missed the game due to a quarantine period after coming into contact with someone who tested positive for COVID-19. The school said Pebley tested negative but was following medical protocol to isolate.

It’s the first time this season the Seahawks have put players currently on the active 53-man roster on the COVID-19 list.

Shell has started 11 games at right tackle, but had missed time recently with an ankle injury.

Randall had missed the past two games due to a foot injury.

Seattle also activated cornerback Tre Flowers from injured reserve and downgraded running back Carlos Hyde to out for Sunday’s game against San Francisco. Hyde had been unable to practice this week due to a non-COVID related illness.

The men’s basketball game Saturday between DePaul and St. John's has been postponed due to a COVID-19 issue within the Red Storm program.

St. John's athletic director Mike Cragg called it "unequivocally the right thing to do" and thanked DePaul coach Dave Leitao and the school's administration and Big East Conference for their cooperation.

The contest will be rescheduled for a later date.

Miami Dolphins reserve linebacker Kamu Grugier-Hill will miss Sunday’s game at Buffalo because of an illness not related to COVID-19, the team said.

Backup quarterback Ryan Fitzpatrick went on the reserve-COVID-19 list Thursday and will miss the game as Miami tries to clinch an AFC wild-card berth.

Every player on the active roster practiced Thursday and Friday, and coach Brian Flores expressed optimism about the likelihood Fitzpatrick’s infection was an isolated case within the team.

A second Cleveland Browns coach has tested positive for COVID-19 ahead of the team's big game with the Pittsburgh Steelers.

The team has not yet identified the coach, who will miss Sunday’s game. Cleveland has again closed its headquarters to conduct contact tracing, which has been the norm all week.

The Browns, who can clinch their first playoff berth since 2002 with a win on Sunday, have had seven players and two coaches test positive in the past week.

The team practiced Friday after cancelling their workout Thursday and getting just an hour on the field Wednesday because of new COVID-19 cases and protocols.

Coach Kevin Stefanski had planned a walk-through for Saturday, but that has been delayed. A week ago, the team was preparing to leave for the New York area when a positive test led to several players, including the top four wide receivers being held out of a loss to the Jets.

The school said it is pausing all team activities, which will resume once all personnel clear coronavirus protocols. No decisions have been made on further Rams games.

The school says it is following guidelines from the Atlantic 10 Conference, the university and Virginia Department of Health to protect the safety of players, coaches, staff and the VCU community.

The Premier League’s announcement follows the postponement of Fulham’s game on Wednesday against Tottenham.

As a result, Fulham’s players and staff then underwent more testing which resulted in “a further increase in positive COVID-19 cases.”

The League said it “continues to have confidence in its COVID-19 protocols, fully backed by the government, to enable fixtures to be played as scheduled.”