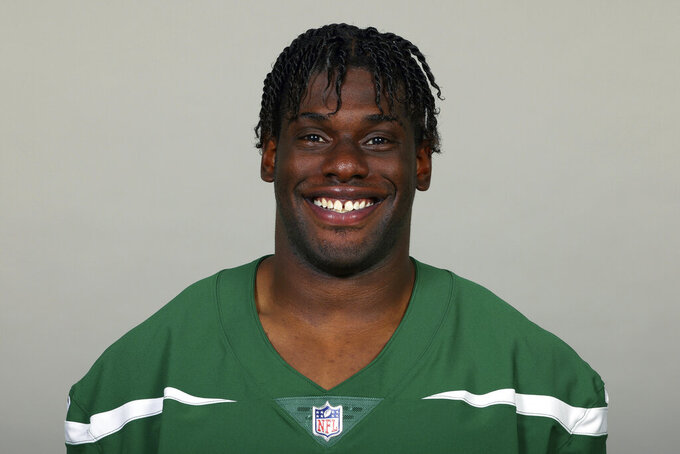 FILE - This is a 2021 file photo of Carl Lawson of the New York Jets NFL football team. A torn Achilles tendon in a joint practice with the Green Bay Packers last August left the Jets wondering what could’ve been. Lawson is feeling healthy but remains on the comeback trail. (AP Photo/File)

The powerful defensive end seemed to be in the backfield on every play, providing an exciting glimpse of what could be. A torn Achilles tendon in a joint practice with the Green Bay Packers last August left the Jets wondering what could've been.

Lawson remains on the comeback trail, expecting to be back on the field when training camp begins in late July.

“I’ll be ready to go when my number is called,” Lawson said Wednesday during a Zoom call. "Even when I was on one leg, I was ready to go.”

Feeling healthy, Lawson will be counted on again by the Jets this season. But he comes to a defense under coach Robert Saleh and coordinator Jeff Ulbrich that looks much different than last year.

With the additions, the Jets’ D-line appears to be deep and talented — arguably the best position group on the team. Along with Lawson, Martin, Thomas and Curry, New York also has Quinnen Williams, John Franklin-Myers, Sheldon Rankins, Nathan Shepherd and Jonathan Marshall, among others.

And that has Lawson pretty giddy.

“I think the potential is through the roof,” Lawson said. “You’ve got so many different people that have been through different adversities. And then you’ve got that competitive nature. ... And you’ve got guys who love football.

“So it’s an absolute breeding ground for monsters. So I love this group. I love it, really.”

Lawson was the centerpiece of a revamped defense last offseason, signing a three-year, $45 million deal with New York to boost its pass rush after showing plenty of promise during four seasons in Cincinnati. Without him, though, the Jets struggled on defense while finishing last or close to the bottom of the rankings in various key categories.

Meanwhile, Lawson was forced to watch as a spectator, rehabilitating and preparing for his return.

“I mean, (it was) tough,” he said. “When you go through things like that and you come out on the other side and continue to work, it’s only a benefit, you know? So yeah, it sucks, but at the same time, it’s just like you get mentally stronger from it the way you approach it.”

He kept in touch with his teammates, watched film and learned the defense. Lawson also kept in mind that he bounced back from two ACL injuries in the past and was able to perform at a high level. That's the goal this time around, too.

“I’ve had a major injury before and I came back better,” Lawson said. “This is different, but I don’t plan on not being better than I was."

“I think he was ready to roll the second he tore it,” the coach said. “I mean, the guy is an animal with rehab, so I’m not worried about his availability.”

His teammates are certainly betting on Lawson being dominant again. Tight end C.J. Uzomah, who signed with New York as a free agent, saw what Lawson did during their four seasons together as Bengals teammates and three others at Auburn — and insists the defensive end is exactly as advertised.

“Carl is a monster,” Uzomah said. “He’s built like an action figure. If you go on Madden and you try to build a player, that is Carl. ... He’s just a freak. His get off is unbelievable, and his biggest strength is his strength. He’s a monster.

"To get him back on the field, our defensive line is going to be really freaking good.”

NOTES: Uzomah has been impressed with second-year QB Zach Wilson, who finished strong last season after a rough start as a rookie. “He’s talented as hell,” the tight end said. “I’m just going to say it. I’ve watched a lot of film, just trying to study up on the offense as a whole. Just watching him back there, I’m expecting him to make huge strides this season. He’s asked me a bunch of questions, trying to pick my brain.” ... Lawson said Uzomah's “big, fast, physical” style is different from how he played at Auburn. “He, like, totally switched it on,” Lawson said. "So, you're getting a big, fast, physical — one of those annoying tight ends that just stays on his block the whole time.”