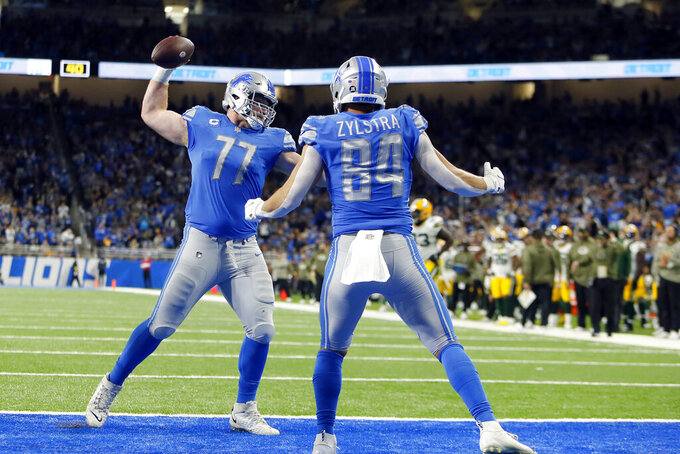 Detroit Lions center Frank Ragnow (77) spikes the ball after tight end Shane Zylstra's 1-yard reception for a touchdown during the first half of an NFL football game against the Green Bay Packers, Sunday, Nov. 6, 2022, in Detroit. (AP Photo/Duane Burleson)

DETROIT (AP) — There was no one close to Shane Zylstra when the Detroit Lions tight end caught his first NFL touchdown on Sunday.

Waiting on the sideline, though, was someone very close indeed.

Zylstra and his brother Brandon were elevated from Detroit's practice squad this week and played together for the first time in their lives Sunday as the Lions beat the Green Bay Packers 15-9.

Shane caught his first TD in his eighth pro game, and the siblings exchanged jerseys and posed for photos on the field after the final whistle.

“It is obviously a great feeling to be able to help this team win a game,” Shane Zylstra said. “But to play with my brother is very special. This is something we’ve talked about for a long, long time,.”

Shane Zylstra, a 25-year-old in his second pro season out of Minnesota State, caught a 1-yard pass from Jared Goff with 20 seconds left in the first half, taking advantage of the chance to play after the team traded T.J. Hockenson to Minnesota this week. He was wide open on the play and gave the ball to offensive lineman Frank Ragnow to spike in celebration.

Brandon Zylstra had one kick return for 19 yards. The 29-year-old wide receiver is with his third NFL team and has also played in the Canadian Football League.

The Zylstras are the sixth brothers to play in the same game for Detroit and the first to do it both on the offensive side of the ball.

“Humbled and grateful,” Brandon Zylstra tweeted after the game.