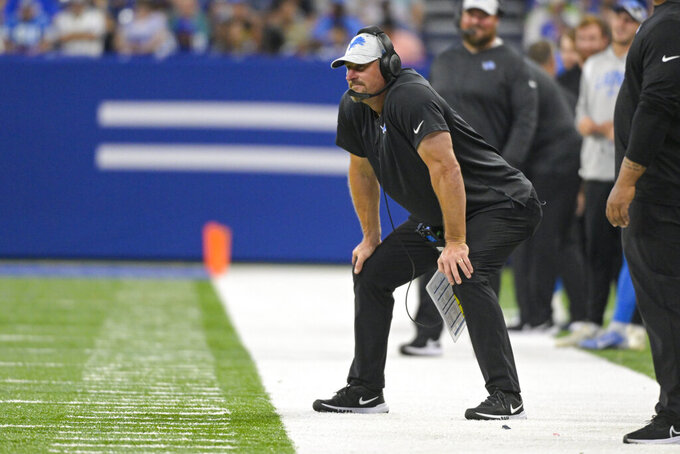 Detroit Lions head coach Dan Campbell watches from the sidelines during the second half of an NFL preseason football game against the Indianapolis Colts in Indianapolis, Saturday, Aug. 20, 2022. (AP Photo/Doug McSchooler)

Strengths: The Lions will lean on their offensive line, hoping their five starters stay together after not playing one game as a group last year. They invested first-round picks in OTs Taylor Decker and Penei Sewell along with C Frank Fragnow. P Jack Fox has ranked among the NFL's top three in yards per punt during each of his two seasons.

Weaknesses: Each position group on defense might struggle. Detroit did attempt to fill a void by taking Hutchinson No. 2 overall, but it did not do much in the offseason to improve the linebacking group or secondary. Elliott, a sixth-round pick in 2018, was a significant offseason addition and he looked shaky in the preseason.

Camp Development: LB Malcolm Rodriguez, a sixth-round selection from Oklahoma State, was a pleasant surprise this summer. Instead of competing for a roster spot, the 5-foot-11, 230-pound Rodriguez may earn a starting job in Week 1.

Fantasy player to watch: WR Amon-Ra St. Brown. The fourth-round pick in 2021 became the first rookie in league history to have eight-plus receptions in six straight games. He helped Detroit close the season 3-3 with five touchdowns during the six-game stretch. He joined Odell Beckham (2014) and Randy Moss (1998) as the only rookies in NFL history with at least 90 yards receiving and a receiving touchdown in four straight games.

Expectations: If Detroit's defense struggles, it will likely lead to at least 10 losses for the fifth year in a row, and a second straight season under coach Dan Campbell. Hutchinson appears to be a player to build around, but there isn't much help behind him right now. The Lions should be able to move the ball and score behind a strong offensive line in Jared Goff's second season with the team, surrounded by an improved group of receivers, a solid duo of running backs and standout tight end T.J. Hockenson.