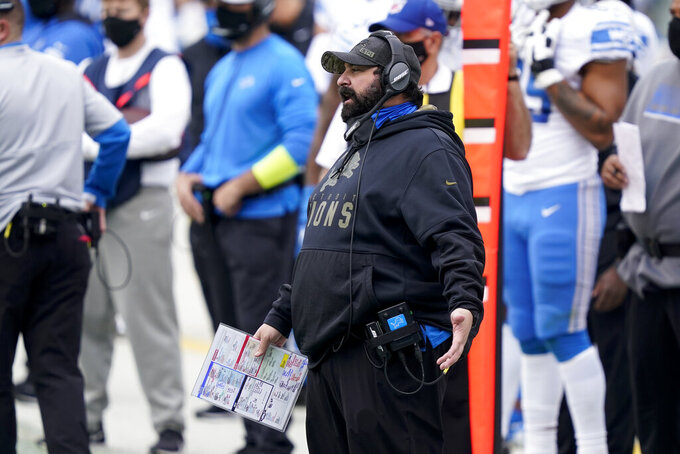 DETROIT (AP) — As poorly as the Detroit Lions have played this season, this might have been a new low.

That meant some predictable questions for coach Matt Patricia.

The Lions were shut out 20-0 Sunday by a Carolina team that was missing its quarterback and star running back. It was the first time Detroit went scoreless since 2009. The Lions managed only 10 first downs and 185 total yards, utterly failing to take advantage of a weakened opponent.

On Monday, Patricia was asked what he's been told about his job security.

“Our focus right now is on Houston,” Patricia said, referring to Detroit's Thanksgiving opponent later this week. “Any conversations that I've had with ownership, I always keep those private.”

Patricia is in his third season with the Lions, and they've gone 13-28-1 since he took over. That includes a 4-6 mark this season so far.

The Panthers were without quarterback Teddy Bridgewater and running back Christian McCaffrey on Sunday. Detroit's offense was a bit depleted as well, with running back D’Andre Swift (concussion) and wide receivers Kenny Golladay (hip) and Danny Amendola (hip) all out.

But that doesn't explain how Detroit allowed P.J. Walker to throw for 258 yards and a touchdown in his first NFL start.

Detroit's annual Thanksgiving game had already lost some of its luster because of the coronavirus, and now Patricia's future — and that of general manager Bob Quinn — are looming over the team. Players have still been publicly supportive of Patricia.

“I love Matt as a head coach,” said safety Duron Harmon, who played for New England when Patricia was a defensive coordinator there. “Whatever he asks of me to do, his approach as a coach, I'm going to follow him. I'm going to ride with him until the wheels fall off.”

Patricia was asked what a fair time frame is to evaluate a coach.

“We certainly are critiqued and judged every day by the job that we're doing,” he said. “We try to improve every day from that standpoint and try to do it better and always try to be the best that we can be.”

Not much. The Lions do have the NFL's leading punter in Jack Fox. He had six opportunities Sunday, averaged 42.2 yards and put four inside the 20.

Detroit's offense was not at full strength in this game, but this was still an inept performance against a Carolina defense that had allowed 79 points in its previous two games. Matthew Stafford — who was questionable in the days leading up to the game — did play but only threw for 178 yards. The Lions allowed five sacks.

“One thing that Carolina did, that we knew they did a bit of, was they would play some odd defenses, and there'd be kind of some wonky looks,” offensive lineman Taylor Decker said. “We had to try to get them out of that and we never really did. Things were identified well, I thought, from an offensive line standpoint, but not necessarily always executed properly."

It's hard to think of anyone who played for the Lions who came out of this game looking particularly good. Former coach Jim Caldwell — who had three winning seasons in four years with Detroit before being replaced by Patricia — probably looks a little better as the Lions continue to flounder.

With Swift out, it was left to Adrian Peterson and Kerryon Johnson to handle most of the running duties, and neither had any real success. They combined for 35 yards on 13 carries.

Cornerback Phil Ford left in the third quarter with a concussion. The Lions did not practice Monday but released participation designations based on estimations — Swift and Amendola were listed as not practicing, and so were Ford, rookie cornerback Jeff Okudah (shoulder) and defensive lineman Da'Shawn Hand (groin).

Golladay was listed as limited in practice.

2 — The number of punts Carolina forced in its previous four games before forcing six against the Lions.

The Lions have almost reached the end of an easier stretch in their schedule, but they face Houston (3-7) on Thursday first.

Five of Detroit's past six opponents currently have losing records. The Lions went 3-3 in those games.