Lock, Bridgewater sharp for Broncos in 33-6 win vs. Vikings 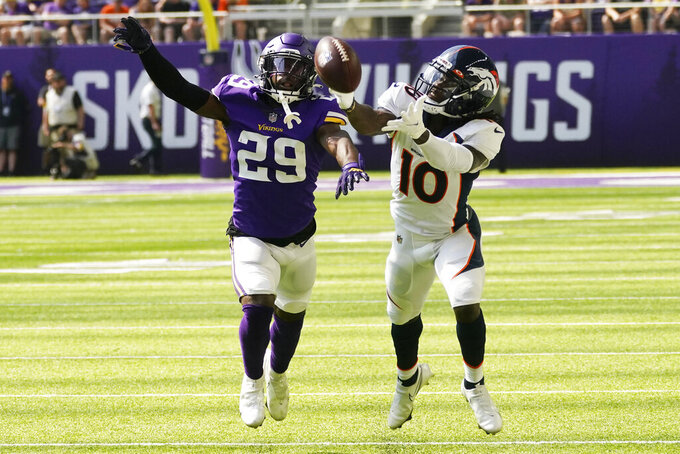 MINNEAPOLIS (AP) — Neither Drew Lock nor Teddy Bridgewater stood out from the other as both of Denver's quarterback candidates faced Minnesota backups.

There sure was no reason to complain about any lack of clarity, though. The whole team looked sharp in the Broncos' exhibition opener.

Lock passed for 151 yards and two touchdowns in three possessions in a crisp first audition for the open competition, Bridgewater followed suit and the Broncos beat the Minnesota Vikings 33-6 on Saturday afternoon.

“I’m thrilled that both of them played well. I want it to be a hard decision,” said coach Vic Fangio, repeating the “even-steven” declaration he's made on the race all summer.

Broncos first-round draft pick Pat Surtain II scored on a 30-yard interception return after a misdirected throw by Vikings backup Jake Browning, who was then pulled for rookie Kellen Mond.

K.J. Hamler had 105 receiving yards, including an 80-yard catch, sprint and score from Lock on the first play after a safety against the Vikings. Trinity Benson had two touchdowns, one from each of the quarterbacks vying to be the starter for September.

“From a mental standpoint and a physical standpoint, I feel like I’m a little past where I left off and it feels good to be able to say that,” said Lock, the third-year passer who took the first turn and finished 5 for 7.

Bridgewater, acquired by new general manager George Paton in an offseason trade with Carolina, was 7 for 9 for 74 yards. Fangio has already promised to flip the order for the next game, but neither of them seems to be sweating the situation.

“There’s 10 other guys out there on the field competing to earn a spot on this team. If I make it about me in that moment, I’m hurting the team,” said Bridgewater, who again received a rousing cheer from the Vikings fans still fond of him from his time here from 2014-17.

With the late-summer sun streaming through the giant glass front doors, the crowd — much of it in Broncos orange — was just happy to be back at U.S. Bank Stadium after the gates were closed for 2020 due to the pandemic.

The Vikings rested more than 30 players, after two full days of practice against the Broncos at the team's suburban headquarters this week. The only projected starter who played was defensive end Stephen Weatherly, leaving a lot to be desired for the competition level for Lock and Bridgewater.

The Broncos used most of their first-team offense, with running back Melvin Gordon III, wide receiver Courtland Sutton and left guard Dalton Risner the most notable absences, but Fangio kept his starting defense on the sideline.

Surtain, who was selected ninth overall out of Alabama ahead of quarterbacks Justin Fields and Mac Jones, sure made his mark when he muscled in front of an out route by fellow rookie Ihmir Smith-Marsette.

“I felt it coming. They ran the same route concept the drive before, so I was expecting it," Surtain said. "I just made a play on the ball.”

Browning went 5 for 10 for 31 yards. Vikings right guard Dakota Dozier, who fell behind Oli Udoh in the competition for a starting spot, was whistled for holding on former teammate Shamar Stephen in the end zone for a safety. Dozier had a false start penalty later and was from the only Viking who turned in a less-than-stellar effort.

Coach Mike Zimmer was upset enough about the “ very poor performance ” that he vowed to send the same second-stringers out for an intense intrasquad scrimmage on the practice field next week.

Mond, the third-round draft pick out of Texas A&M who could supplant Cousins in a year or two, went 6 for 16 for 53 yards. He rushed five times for 25 yards after missing a big chunk of training camp to COVID-19 recovery. He tested positive on July 31 and returned to practice earlier this week.

“I didn’t feel rusty at all,” Mond said.

The standout for the Vikings was undrafted rookie A.J. Rose, who rushed 25 times for 100 yards. Rose, who played at Kentucky, has his action extended by an early injury to rookie Kene Nwangwu.

Broncos: FS Trey Marshall sprained his ankle covering the opening kickoff and needed help to limp off the field. RB LeVante Bellamy, who had a 62-yard kickoff return, also hurt his ankle.

Vikings: Nwangwu, whose speed has been one of the highlights of training camp, returned the opening kickoff for 18 yards but hurt his knee and was declared out shortly after. LB Cam Smith, who sat out the 2020 season after open heart surgery, left with a concussion in the second quarter.