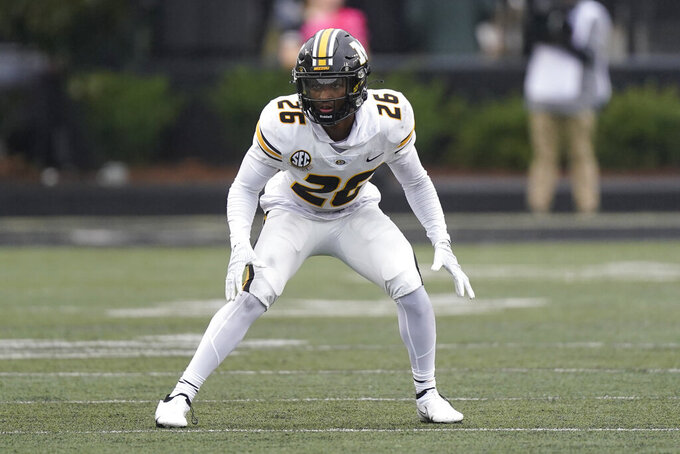 FILE - Missouri defensive back Akayleb Evans plays against Vanderbilt in the first half of an NCAA college football game on Oct. 30, 2021, in Nashville, Tenn. The Minnesota Vikings selected Evans in the fourth round of the NFL draft on Saturday, April 30, 2022. (AP Photo/Mark Humphrey, File)

An instant starter at safety. Two cornerbacks among the team's first five picks. Depth at guard and linebacker. An edge rusher, from the state university as a fan-friendly bonus.

The way the Vikings moved around to get those guys, though, invited plenty of questions. Adofo-Mensah signed off on a total six trades, including three on Saturday as the team repeatedly adjusted its positioning on the way to a 10-player pool of picks.

The deals the Vikings struck during the first round ( with Detroit ) and during the second round ( with Green Bay ) will forever be attached to Adofo-Mensah's resume, as he's well aware. Fans will be closely tracking the progress of the wide receivers (Jameson Williams at No. 12 to the Lions and Christian Watson at No. 34 to the Packers) that went to their division rivals from those trades.

“What is your happiness in this scenario versus the other scenario? That’s ultimately what your job is, and part of our happiness is to make sure we have the best team as possible that we can put on the field,” Adofo-Mensah said. “The other thing people should realize is that they can call other teams, so we were pretty sure that the team behind us was going to get the same deal. Having that team get that player and us not get those picks isn’t a better outcome. The only better outcome would have been to take that player, but in our situation we didn’t think that was the best decision.”

Hired in January to replace the scouting-oriented Rick Spielman, Adofo-Mensah with his experience studying economics and trading stocks took the Vikings in a different direction at the top of the football operations.

“The great part about being on Wall Street is, you make decisions and they keep score, very quickly. So the sort of assuredness of yourself goes away, immediately,” Adofo-Mensah said. “There’s like a humility that I have because you spent half of your week being wrong."

The Vikings made Missouri cornerback Akayleb Evans their first of six picks on Saturday, in the fourth round with the 118th overall selection.

Having taken Clemson cornerback Andrew Booth Jr. in the second round on Friday, the Vikings added two rookies in the mix at their position of greatest need with Patrick Peterson, free agent signings Chandon Sullivan and Nate Hairston, and returners Kris Boyd and Cameron Dantzler.

“You need four good ones, at least. You need depth year-in and year-out. That position will get challenged. We’re excited to add to the competition we had in that room,” Adofo-Mensah said.

Evans, a graduate transfer from Tulsa who spruced up his draft stock with a season playing in the mighty SEC, said Peterson was the player he most looked up to while following pro football as a kid.

“It’s going to be a great opportunity to be able to learn from him and other people on the team," Evans said. "It’s just a true blessing.”

With their first of two fifth-round picks, at No. 165 overall, the Vikings took Minnesota defensive end Esezi Otomewo. That gave the Gophers a pair of edge rushers among the four players they had drafted during the weekend. Boye Mafe went to Seattle in the second round on Friday.

As the Vikings transition under new defensive coordinator Ed Donatell to a 3-4 scheme, the traditional defensive ends in the old 4-3 system will likely move to outside linebacker. Otomewo could profile as more of a down lineman, though, after gaining plenty of experience with the Gophers moving around in different alignments.

“Versatility is a huge asset for him, especially coming into this system,” assistant director of college scouting Pat Roberts said.

North Carolina running back Ty Chandler was chosen later in the fifth round.

After trading with Detroit, Green Bay and Indianapolis to move up and down on the first two days, the Vikings made two deals with Las Vegas and one with Cleveland on Saturday. As a result, they picked twice in the sixth round (Illinois offensive tackle Vederian Lowe and Michigan State wide receiver Jalen Nailor) and once in the seventh (South Carolina tight end Nick Muse). None of the 10 picks the Vikings made came in the original spots.

“Sometimes you’re rewarded for those risks and trading back and adding picks, but other times you trade up," Adofo-Mensah said. "We did both, and ultimately it was to be able to target certain parts of the board for different reasons.”