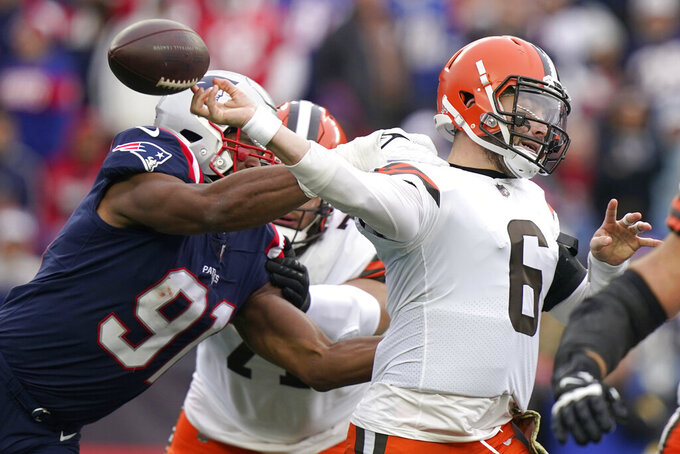 FOXBOROUGH, Mass. (AP) — Baker Mayfield limped to the sideline with a bruised knee, and with him went the Cleveland Browns' hopes.

In the game, and possibly the season.

The departure of the insurance pitchman and quarterback was a demoralizing way to complete a week in which the Browns finally rid themselves of receiver Odell Beckham Jr. and lost running back Nick Chubb to a positive COVID-19 test.

Coming off a 41-16 victory over Cincinnati that could have been reason for optimism, the Browns (5-5) fell behind 31-7 with Mayfield in the game, and then completely collapsed after he left. New England (6-4) won 45-7 — its fourth straight victory.

“The losing is the worst part,” Mayfield told reporters before limping out of the postgame news conference with what the team called a bruised knee.

“We thought we’d been in a better place right now, but we’re not," he said. “When you’re sitting here at 5-5, obviously something’s wrong. We’ve got to figure it out, and get it fixed.”

Mayfield has already missed one game this season with an injury to his non-throwing shoulder. He banged up his left knee last week and has also a sore left foot, which limited him in practice for New England.

Mayfield was sacked on a second down from the Browns 42 in the third period, and then on the next play he was body-slammed to the turf by Deatrich Wise — a play that drew a roughing-the-passer penalty.

Two plays later, Matthew Judon crunched into Mayfield’s midsection, and the QB was slow to get up. After a few minutes, Mayfield limped off.

“Just an awkward hit and landing,” Mayfield said. “Gotta find a way to get as healthy as possible. I’m pretty beat up right now.”

Stefanski said Mayfield could have returned if the game had been winnable.

“It was my choice not to,” the coach said. “Baker’s a competitor. I just didn’t feel like it was the right thing to do.”

Case Keenum replaced Mayfield and was then sacked on back-to-back plays. Offensive lineman Joel Bitonio said he expects Mayfield to play against the Lions on Sunday.

“He’s one tough guy. If he can play, he’ll be out there,” Bitonio said. “But if he’s out there, we have to protect him, keep him safe.”

Mayfield was 11 for 21 for 73 yards passing and one touchdown in less than three quarters. He also threw an interception that fell 5 yards short of a pick-6. (The Patriots punched it in on the next play.)

The 2018 No. 1 overall pick was outplayed not only by Mac Jones, the No. 15 pick in this year’s draft, but by 36-year-old Patriots backup Brian Hoyer — now with his seventh team in 13 seasons — who led New England 95 yards for a touchdown in mop-up duty.

The Browns also lost cornerback Troy Hill to a neck injury that required him to be wheeled off on a stretcher. Hill banged his head on the turf and was taken to a hospital for further evaluation.

He had movement in his hands and feet, the team said.

The Browns, who entered the season with hopes of contending for their first division title since 1989, have instead struggled to remain above .500.

It was Cleveland’s fourth straight loss against the Patriots. The Browns haven’t won in New England since 1992, when they were coached by Bill Belichick.