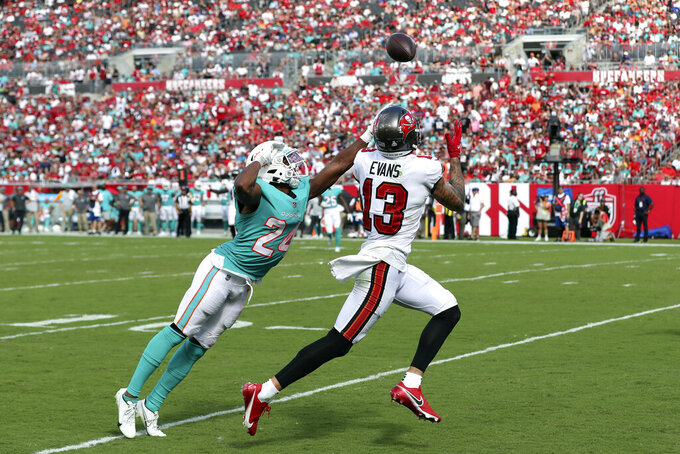 TAMPA, Fla. (AP) — Miami's defense had no answers for Tom Brady and the Tampa Bay Buccaneers.

The defending Super Bowl champions amassed 558 yards and put together six drives of 70-plus yards in a 45-17 rout of the Dolphins on Sunday.

The Bucs scored on their first four possessions to build a 24-10 lead and had a chance to add more when Brady scrambled for a 13-yard gain to move his team in position to attempt a 60-yard field goal that Bradley Pinion missed wide left.

Tampa Bay punted once all day, didn’t turn the ball over and converted 72.7 percent (8 of 11) of its third downs.

Blaine Gabbert replaced Brady after the Bucs built their lead to 28 points, and the Dolphins didn't fare much better against him. The backup quarterback entered the game with just over seven minutes remaining, and the Bucs never gave the ball back.

The game ended with Gabbert taking a knee on three straight snaps after reaching the Miami 5 with two minutes left.

The Dolphins had forced at least one turnover in 26 straight games, the longest active streak in the NFL and longest stretch since the New England Patriots’ 36-game streak from Oct. 16, 2011 to Nov. 23, 2013.

Flores said the team has been addressing defensive areas of concern at practice, but that “we're not seeing the production on Sundays.”

Brady threw for 411 yards and five touchdowns. It was the first time Brady threw for more than 400 yards with five TDs in the same game in his 22-year career.

The Dolphins (1-4) have lost four straight following a season-opening victory over New England. They will look to turn their fortunes around next Sunday against winless Jacksonville (0-5) in London.