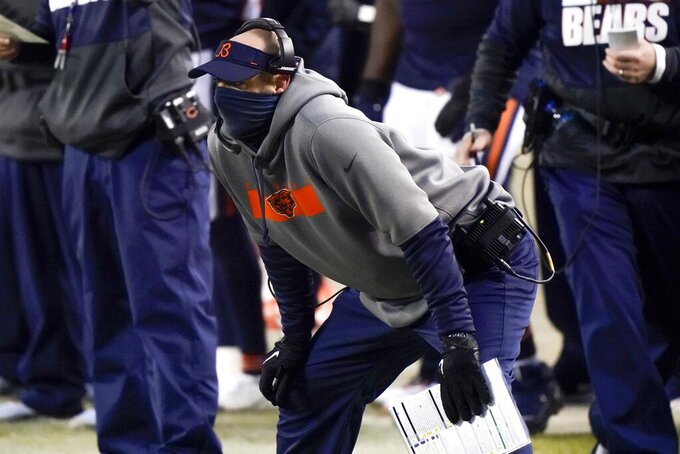 While Matt Nagy gets to coach Chicago in the playoffs despite a middling 8-8 record that could help save his job, former Bears coach Lovie Smith can only wonder if the extra team in the postseason could have helped him eight years ago.

The addition of a seventh playoff team in each conference this season helped make sure Indianapolis wouldn’t become the fourth team in the Super Bowl era to miss the postseason despite winning 11 games, and let the Bears sneak in as the eighth 8-8 team ever to earn a wild-card spot.

Their entrance into the playoffs also raises questions about which other teams would have been helped if the NFL had expanded the postseason earlier.

Smith’s Bears teams from the beginning of last decade are near the top of that list. After losing the NFC title game to eventual champion Green Bay in the 2010 season, the Bears looked poised for another playoff run the following season before Jay Cutler went down with a season-ending thumb injury after a 7-3 start. Chicago lost five of six and missed the postseason as the seventh seed with an 8-8 mark.

The Bears were even better the next season, going 10-6, but once again missed out on the final wild-card spot thanks to a division record tiebreaker with Minnesota. Smith was fired after that season.

He’s not alone when it comes to coaches losing their job after missing the playoffs as the seventh seed, with Detroit’s Jim Caldwell (2017), Tampa Bay’s Jon Gruden (2008) and Minnesota’s Mike Tice (2005) all getting fired after seventh-place finishes.

Caldwell’s firing came after a 9-7 mark that was his third winning record in four seasons but was one game behind Atlanta for the final wild-card spot. The Lions probably have more regrets than Caldwell over that missed chance, having gone 14-33-1 since then. They are looking for a new coach again after firing Caldwell’s replacement, Matt Patricia, during this season.

Had Gruden’s Bucs made it that season, it might have been enough to save his job in Tampa Bay and delay his entrance into the broadcast booth. That was one of two seasons the Bucs finished seventh during a 12-year playoff drought that finally ended this season with Tom Brady at quarterback.

The tough-luck missing playoff team that season was the Giants, who missed out the year before Eli Manning and Co. won their second Super Bowl under coach Tom Coughlin.

In all, 23 franchises under the current eight-division format put in place in 2002 would have benefited from at least one more playoff berth, led by Minnesota and Pittsburgh with four extra trips each.

New Orleans, Atlanta, Chicago, Denver, Houston, Tennessee and Tampa Bay all would have had two more playoff appearances if the seasons had played out the same way.

In the past, the extra team would have been more likely to be a double-digit winner like Indianapolis (nine times) than a .500 team like Chicago (eight times).

The new format also affects the postseason by eliminating the bye for the second-seeded team, forcing Buffalo and New Orleans to play this weekend instead of sitting at home.

No team has gotten to the Super Bowl the past seven seasons without a first-round bye and the last two champions got there as second seeds, with Kansas City winning it last season and New England the previous year.