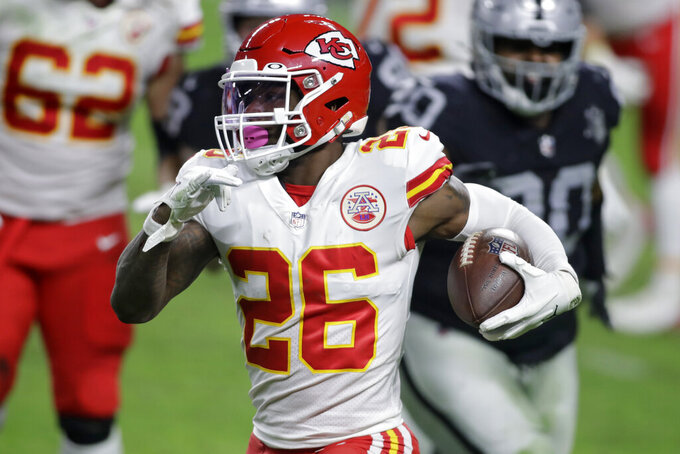 FILE - In this Nov. 22, 2020, file photo, Kansas City Chiefs running back Le'Veon Bell (26) carries the ball against the Las Vegas Raiders during the first half of an NFL football game in Las Vegas. Just a few years ago, Bell was arguably the best all-around running back in the league as a do-it-all playmaking force for Pittsburgh. Kansas City signed him and he wasn't much of a factor; he was active but didn't play in the Super Bowl. (AP Photo/Isaac Brekken, File)

NEW YORK (AP) — They were once at the top of the NFL — league MVPs, All-Pros, Pro Bowlers and faces of franchises.

With the regular season about to kick off, they're now at the front of the unemployment line.

Cam Newton, Adrian Peterson, Le'Veon Bell, Todd Gurley and Richard Sherman are just some of the big-name players without jobs as teams prepare for Week 1.

Some players might be waiting for the right opportunity. Meanwhile, teams might be holding off on adding a veteran before the season begins while assessing their rosters — and financial situations.

But for other players, their time in the NFL as productive playmakers might have unceremoniously come and gone.

Here's a look at some of the more recognizable — and accomplished — players still waiting for a call:

A surprise cut by New England on Tuesday, the 2015 NFL MVP lost out on the starting job to rookie Mac Jones. He started 15 games for the Patriots last season and showed glimpses of the dynamic playmaker he was in Carolina. But he finished with eight touchdown passes and 10 interceptions in what was easily the worst full season of his career.

The fifth-leading rusher in NFL history is 36, but told SportsTalk 790 in Houston in July that he's still aiming to play at least another season. “My body feels strong," Peterson said. “I still feel young. I still feel good.” The 2012 NFL MVP had a solid if unspectacular one-season stint in Detroit last year, running for 604 yards and seven touchdowns.

Just a few years ago, Bell was arguably the best all-around running back in the league, a do-it-all playmaking force for Pittsburgh. Then he sat out the entire 2018 season while in a contract dispute. Looking to rejuvenate his career — and reclaim his place among the NFL's elite — Bell signed with the Jets in 2019, but fizzled before being cut after two games last year. Kansas City signed him, but he wasn't much of a factor; he was active but didn't play in the Super Bowl.

Gurley, who's only 27, put up video game-like stats in three of his first four seasons with the Rams, including running for 30 touchdowns and catching 10 TD passes in 2017 and '18. Concerns about his left knee cropped up when he struggled in the 2018 playoffs and again the following season, when he had just 857 yards rushing. Gurley signed with Atlanta last year and showed only flashes, running for a career-low 678 yards while sharing the backfield with Brian Hill and Ito Smith.

Once a key piece of Seattle's “Legion of Boom” defense, Sherman was arguably the best cornerback in the league in his prime. He spent the last three years in San Francisco as a still-solid player when healthy — he missed 11 games last season with a calf injury. While still conceivably able to help a team's secondary even at 33, Sherman's playing future is uncertain. He faces legal issues stemming from his arrest in July on accusations of drunkenly crashing his SUV in a construction zone and trying to break into his in-laws’ suburban Seattle home.

It appeared 2020 would be the last season for Fitzgerald, who has played all 17 years of his NFL career with the Arizona Cardinals. That sentiment seemed to be cemented two weeks ago when the 38-year-old Fitzgerald told SiriusXM he was focused on being a radio broadcaster. “I just don’t have the urge to play right now,” he said. But could he have a change of heart with the season about to start? Second only to Jerry Rice in career receptions and yards receiving, Fitzgerald could certainly help a team that thinks it’s one receiver away — or give Cardinals fans one final hurrah.

The No. 3 rusher in NFL history might have finally reached the end of his likely journey to the Pro Football Hall of Fame. But the 38-year-old running back has defied odds his entire career, recovering from multiple knee injuries to become one of the league's most productive performers out of the backfield. He finished with 653 yards last season to lead the Jets in his one year in New York. If he stills wants to carry the ball, it's tough to count him out.

The 31-year-old guard was a consistently reliable blocker in nine years for the Steelers while being selected an All-Pro twice and making six straight Pro Bowl trips. DeCastro dealt with a few injuries last season that limited him to 13 games and he needed offseason ankle surgery. He was released by Pittsburgh with a non-football injury designation and retirement seemed likely. But with so many teams needing O-line help, a healthy DeCastro would give someone an immediate upgrade.

RG3 hasn't been a full-time starting quarterback in several years, but he was an experienced backup the last three seasons in Baltimore. The 31-year-old QB joined ESPN as an NFL and college football analyst, but has a clause in his contract that would allow him to still join an NFL team looking for a veteran — if he chooses to leave the booth.

The former Cowboys star wide receiver missed the 2018 season with an Achilles tendon injury and then was without a job for all of 2019. He made his return to the NFL last year, joining Baltimore as a complementary receiver in the Lamar Jackson-led offense. Bryant caught six passes for 47 yards and two TDs in six games, hardly superstar numbers. But at 32, he still believes he could help a contender looking for one more piece to the offense.

The former Bears star had six straight seasons in which he caught at least 52 passes and had at least 789 yards receiving. Calf, hip and foot injuries limited him to just 43 catches in 10 games in 2019 with the Eagles. He spent the first eight games on the sideline last season and finished with just six catches in seven games. Healthy again, the 31-year-old Jeffery could give a team a big-bodied third-down and red-zone target.

OTHERS STILL OUT THERE