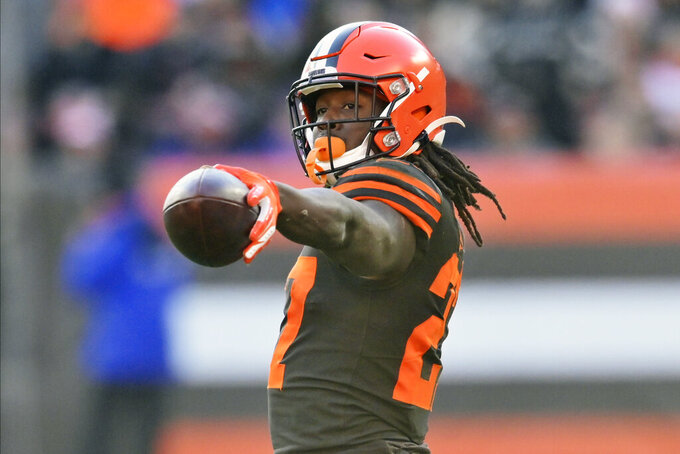 FILE - In this Dec. 22, 2019, file photo, Cleveland Browns running back Kareem Hunt reacts during an NFL football game against the Baltimore Ravens in Cleveland. The Browns opened a unique free agency period by placing a second-round tender on running back Kareem Hunt, who played eight games last season after returning from an NFL suspension. (AP Photo/David Richard, File)

The NFL has barred in-person interviews with free agents and is requiring local physical examinations for them rather than team-conducted exams.

In a memo sent to the 32 franchises on Monday, the league also banned travel by team personnel to meet with free agents as well as those players traveling to team facilities. The league's business year begins Wednesday, and the period in which players' representatives could negotiate with clubs began Monday — though no deals could be finalized.

All offseason activities such as meetings, practices and minicamps have been delayed indefinitely as a safeguard against the new coronavirus. No players can enter a club facility through March 31, with the exception of those receiving medical treatment.

The restrictions were first reported by ESPN.

In a flurry of activity around the league Monday night, the Dallas Cowboys and top receiver Amari Cooper agreed on a $100 million, five-year contract. That came after the Cowboys placed their exclusive franchise tag on Dak Prescott, securing the rights to their star quarterback for an estimated $31.5 million while the sides continue working on a long-term deal.

Buffalo agreed to acquire big-play receiver Stefon Diggs and a seventh-round draft pick from Minnesota in exchange for four draft picks, including No. 22 overall this year. The Vikings also agreed with quarterback Kirk Cousins on a $66 million, two-year contract extension.

Free agent quarterback Marcus Mariota agreed to join the Las Vegas Raiders, giving them an experienced backup who could also challenge Derek Carr for the starting role. Mariota, the No. 2 pick in the 2015 draft, lost his starting job in Tennessee last season to Ryan Tannehill.

Earlier, things got even hotter in the desert on offense with one of the NFL's biggest stars, DeAndre Hopkins, headed to Arizona.

In a stunner that overshadowed several other trades and a slew of offers to unrestricted free agents, the Texans sent their three-time All-Pro receiver to the Cardinals for running back David Johnson, a second-round draft pick this year and a fourth-rounder in 2021.

The NFC champion 49ers got into the bartering, too. They dealt top defensive tackle DeForest Buckner to Indianapolis for the No. 13 pick in this year's draft, which, incidentally, won't have any public events next month in Las Vegas — if it is even held there as originally planned.

A person familiar with the deal said Buckner will receive a new contract worth $21 million a year from the Colts. The person spoke on condition of anonymity because the deal and contract can't be finalized until the start of the league year Wednesday.

The trade came just after San Francisco opted to keep another standout lineman, Arik Armstead, who got a five-year deal worth $85 million.

"I am just getting started,” Armstead said.

And later, the 49ers agreed with safety Jimmie Ward on a three-year deal that keeps him in San Francisco.

The NFL's business year is just beginning, as planned, despite the spread of the new coronavirus. For now, all moves are being done remotely with basically a ban on travel within the league.

For most people, the new coronavirus causes only mild or moderate symptoms, such as fever and cough. For some, especially older adults and people with existing health problems, it can cause more severe illness, including pneumonia.

The vast majority of people recover from the new virus. According to the World Health Organization, people with mild illness recover in about two weeks, while those with more severe illness may take three to six weeks to recover.

Also traded was Baltimore tight end Hayden Hurst to Atlanta, which is losing tight end Austin Hooper to Cleveland in free agency (four years, $44 million). The Ravens received second- and fifth-round picks in this year's draft, and the Falcons got a fourth-rounder.

Fourteen franchise tags were handed out, the most since 2012, with only one to a quarterback in Prescott. The other big names among those franchised were Titans running back Derrick Henry; Bengals receiver A.J. Green; Chiefs defensive tackle Chris Jones; and Buccaneers linebacker Shaq Barrett, the league leader in sacks in 2019. The move by Tampa Bay with Barrett almost assures that quarterback Jameis Winston is headed elsewhere.

Running back Kenyan Drake got a transition tag from Arizona, but with Johnson traded to Houston, he has an open path to the starting job.

In case you're wondering, no word out of the Tom Brady camp on a potential landing spot for the six-time Super Bowl champion should he leave New England.

In other pending deals or moves:

—Free agent tackle Jack Conklin agreed to a three-year, $42 million contract with the Browns. A 2016 All-Pro as a rookie, he will get $30 million guaranteed and earn $20 million in his first year. Cleveland also released veteran safety Morgan Burnett.

—Defensive tackle Jarran Reed agreed on a two-year contract that keeps him in Seattle with a deal reportedly worth $23 million.

—Minnesota reached an agreement with punter Britton Colquitt on a three-year, $9 million contract in which he will get $5 million in guaranteed money.

—Washington agreed to re-sign inside linebacker Jon Bostic to a $6.6 million, two-year deal. The Redskins are also set to sign guard Wes Schweitzer, who spent his first three seasons with Atlanta.

—The Raiders agreed to a three-year deal with linebacker Nick Kwiatkoski.

Watson, a 39-year-old Patriots tight end, is concluding a 15-year NFL career that included two stints in New England, as well as stops in Cleveland, New Orleans and Baltimore. Watson retires with 547 catches for 6,058 yards and 44 touchdowns. And a Super Bowl ring.

Foster, 34, is an 11-year veteran who made the Steelers as an undrafted rookie free agent out of Tennessee in 2009. He became a steadying force on a unit that evolved into one of the league's best.