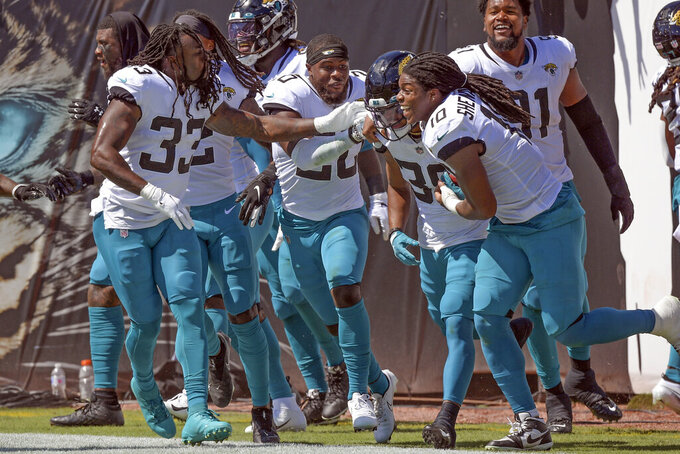 Jacksonville Jaguars players celebrate with wide receiver Jamal Agnew, second from right, after he ran back a missed field goal for a 109-yards for a touchdown against the Arizona Cardinals during the first half of an NFL football game, Sunday, Sept. 26, 2021, in Jacksonville, Fla. (AP Photo/Phelan M. Ebenhack)

Eagles (1-1) at Cowboys (1-1), 8:15 p.m. EDT. Dak Prescott and the Dallas Cowboys take the NFL’s No. 4 offense into their home opener against Philadelphia and the fourth-best defense. It’s the first home game for Prescott since the gruesome ankle injury that ended his 2020 season last October at AT&T Stadium. The home team has won five consecutive games in the series, matching the previous longest streak from 1961-63. The Eagles are 9-3 on Monday night since 2013. The Cowboys have won seven of the 11 Monday night meetings between the NFC East rivals.

— Matthew Stafford, Rams, passed for 343 yards and four touchdowns as he outdueled Tom Brady and led Los Angeles to a 34-24 victory over the Buccaneers.

— Justin Herbert, Chargers, finished with 281 yards passing and four touchdowns without an interception in outdueling Patrick Mahomes in a 30-24 win at Kansas City.

— Josh Allen, Bills, finished 32 of 43 for 358 yards and four touchdowns, while also surpassing the 100-touchdown plateau (including TDs rushing and one receiving) in his 47th start. Buffalo defeated Washington 43-21.

— Kirk Cousins, Vikings, went 30 for 38 for 323 yards in his third consecutive turnover-free game, throwing for three first-half TDs in a 30-17 win against Seattle.

— Derek Carr, Raiders, completed 26 of 43 pass attempts for 386 yards and two touchdowns in a 31-28 overtime victory against Miami.

— Alexander Mattison, Vikings, stepped in for the injured Dalvin Cook and racked up 171 total yards in a 30-17 win against Seattle.

— With star running back Josh Jacobs sidelined with an ankle injury, the Raiders' Peyton Barber led the rushing game with 111 yards on 23 carries and one touchdown in a 31-28 OT win over Miami.

— TE Mark Andrews had five receptions for 109 yards for the Ravens, who have won 11 straight games against NFC opponents after a 19-17 victory at Detroit.

— Mike Williams, Chargers, finished with seven catches for 122 yards and two TDs, including the winning score in a 30-24 victory vs. the Chiefs.

In that game, rookie RB Najee Harris caught 14 passes for 102 more for the Steelers. Harris’ 14 catches are tied with Saquon Barkley and Roy Helu for the most receptions by a rookie running back in a single game.

— DeSean Jackson, Rams, got his ninth touchdown reception of at least 75 yards — exactly 75 from Matthew Stafford — tying him with Hall of Famer Lance Alworth for the most in the NFL history, according to Elias, as LA beat Tampa Bay 34-24. Cooper Kupp had nine catches for 96 yards and two touchdowns, while Jackson finished with three receptions for 120 yards.

— Mike Evans, Bucs, finished with eight receptions for 106 yards in the loss to the Rams.

— Justin Tucker, Ravens, set an NFL record with a 66-yard field goal, bouncing it through off the crossbar as time expired to lift Baltimore to a 19-17 win over Detroit. The kick topped the 64-yard field goal Matt Prater made for Denver against San Francisco on Dec. 8, 2013.

— Jamal Agnew, Jaguars, tied the NFL record for longest play with a 109-yard return of Matt Prater's 68-yard field-goal try on the final play before halftime. His touchdown wasn't enough as Arizona won 31-19.

— Myles Garrett made a Browns record 4 1/2 sacks on Justin Fields and Cleveland brought down Chicago’s rookie quarterback nine times in a 26-6 win over Chicago. The Browns held Chicago to 47 yards and six first downs.

— Byron Murphy, Cardinals, stepped in front of Jacob Hollister and turned a trick play into a pick-six. Murphy intercepted two passes, including one he returned for a touchdown following a botched flea-flicker, in a 31-19 win at Jacksonville.

— The Chargers capitalized on four Kansas City turnovers for their third win in the past four visits to Kansas City, 30-24.

— Alexander Johnson led a Denver defense that sacked Zach Wilson five times, intercepted him twice and limited the rookie to 160 yards passing in the Broncos’ 26-0 win over the Jets. Johnson got to Wilson twice. Three of the Broncos’ past four shutouts have come against the Jets.

Justin Tucker, who made a 61-yard kick to beat the Lions in Baltimore’s previous visit to Detroit eight years ago, had his NFL-record 66-yarder bounce off the crossbar and over for a 19-17 victory. ... Jaguars QB Trevor Lawrence, the No. 1 overall draft pick, has nine turnovers in three games and is on pace to throw 40 interceptions. Hall of Famer Peyton Manning holds the rookie record with 28 set in 1998. ... Tom Brady completed 41 of 55 passes for 432 yards and two touchdowns (one passing, one rushing) and joined Drew Brees as the only quarterbacks to throw for more than 80,000 yards. ... Chiefs QB Patrick Mahomes, appearing in his 49th career game, had 260 passing yards and three touchdowns. Mahomes has 15,092 career passing yards and became the first quarterback to reach 15,000 in 50 or fewer games.

The Dolphins got on the board at Las Vegas when linebacker Elandon Roberts darted 85 yards with an interception. That extended a string to an NFL-best 25 straight games with a takeaway for the Dolphins. ... The 34-24 loss at the Rams snapped the defending Super Bowl champion Buccaneers’ 10-game regular season and playoff winning streak going back to last season. ... A 44-yard kick by Seattle's Jason Myers went wide left, ending his team-record streak of 37 straight field goals made, the fourth longest in NFL history. ... Chris Boswell, Steelers, had made all 31 of his field-goal attempts against Cincinnati before missing a 42-yarder in the third quarter ... Younghoe Koo's 40-yard field goal for Atlanta gave coach Arthur Smith his first NFL win and marked the second straight week the Giants lost on the final play of the game. ... Giants RB Saquon Barkley's 1-yard TD run was his first touchdown since the final game of the 2019 season. He tore his ACL last year. ... Cincinnati is above .500 heading into October for the first time in head coach Zac Taylor’s three-year tenure while the Steelers failed to get a sack, ending their NFL-record streak of 75 games. ... Tennessee hadn’t won a game turning over the ball three times since beating Atlanta 20-13 on Oct. 7, 2007. The Titans did so Sunday against Indianapolis. ... The Colts (0-3) are off to their worst start since 2011. ... The Jets (0-3) became the third NFL team to lose a dozen consecutive games in September, joining the 1994-97 Saints and the 2007-10 Rams, who hold the record with 13 consecutive losses in the month.

Baltimore's Justin Tucker got the chance to ruin another night for Lions fans. On Dec. 16, 2013, Tucker hit a 61-yard field goal with 38 seconds left to give the Ravens an 18-16 win. HIs NFL-record 66-yarder Sunday to beat Detroit on the final play gave him the two longest field goals in the history of Ford Field.

Tucker, who also converted a 50-yard field goal in the third quarter, has seven career games with multiple 50-yard field goals, tied with Brandon McManus and Matt Praarter for the most such games in NFL history.

COULD GO ALL THE WAY

When Arizona’s Matt Prater attempted what would have been an NFL-record 68-yard field goal at the end of the half at Jacksonville, things turned out great — for the Jaguars. Jamal Agnew, who returned a kickoff 102 yards in a loss to Denver last week, caught the short kick 9 yards deep and returned it the other way for a score. Agnew broke one tackle — tight end Demetrius Harris had his shirttail — and then found a wall of blockers along the left sideline. It was the NFL’s first “Kick Six” since San Diego’s Antonio Cromartie did it at Minnesota on Nov. 4, 2007. Obviously, a 109-yarder ties the NFL mark for longest play.

Agnew is the first player in NFL history to register a touchdown of at least 100 yards in consecutive games.

Browns WR Odell Beckham Jr., in his first game since tearing up his knee last October, warmed up before the game wearing gold-colored headphones and a “Juice Landry” T-shirt honoring his close friend and teammate Jarvis Landry, who will miss at least three games after being placed on injured reserve earlier this week.

Chiefs RB Clyde Edwards-Helaire ran for 100 yards with a touchdown catch, but was responsible for one of two Kansas City fumbles in a 30-24 loss to the Chargers.

The Giants played the second half without wide receivers Darius Slayton and Sterling Shepard. Inside linebacker Blake Martinez, New York’s leading tackler last season, was knocked out of the game with a knee injury.

“That one was more like a kickoff. It’s like you’re a competitor in a long-drive contest. You just let it rip and hope it stays straight.” — Ravens kicker Justin Tucker after his NFL-record 66-yard field goal bounced off the crossbar and through to beat Detroit 1-19.