Of NFL's Final 4 coaches, Andy Reid is the outlier 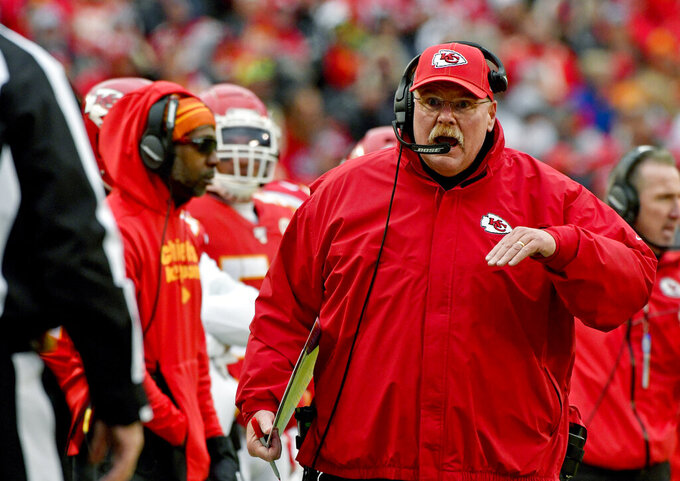 FILE - In this Sunday, Dec. 29, 2019 file photo, Kansas City Chiefs head coach Andy Reid talks to down judge Tom Stephan (68), during the second half of an NFL football game against the Los Angeles Chargers in Kansas City, Mo. Of the coaches in the NFL's Final Four, Andy Reid is the outlier. Only Kansas City's coach has been the head man in a Super Bowl. Only Reid is close to having a Hall of Fame-worthy resume. Only Reid has been around for a couple of decades. (AP Photo/Ed Zurga. File)

Of the coaches in the NFL's Final Four, Andy Reid is the outlier.

Only Kansas City's coach has been the head man in a Super Bowl. Only Reid is close to having a Hall of Fame-worthy resume. Only Reid has been around for a couple of decades.

So, while Tennessee's Mike Vrabel, Green Bay's Matt LaFleur and San Francisco's Kyle Shanahan might look up to Reid and his career achievements, they also recognize that whichever of them wins the NFL title will be doing so for the first time as a coach.

No, despite his longevity as Eagles and then Chiefs coach, and his 15 trips to the postseason, Reid has never lifted the Lombardi Trophy.

``Listen, you've known me a long time, I'm thinking more about the players than I'm thinking about myself,'' Reid says. ``That''s now where I go — I'm trying to get the guys ready, I'm going to make sure I'm ready, then i'm going to go play. I don't really look at it that way: It's more a disappointment for the other teams, they worked their tails off and fell short.''

What Shanahan and LaFleur certainly can admire about Reid is his forward-thinking approach on offense. Both of them are bred in offense, and they rarely back off. While Reid has been a bit more conservative — at least until Patrick Mahomes showed up — Shanahan and LaFleur rarely get shy with the ball.

Vrabel has a defensive background, having won three Super Bowls as a linebacker in New England. Though nobody who saw him catch passes, including for a touchdown in the 2005 game against Reid and the Eagles, can forget his hand in the Patriots offense.

That's hardly the only connection among this quartet.

The ties between the Niners and Packers coaching staffs run deep. LaFleur worked under Shanahan on staffs in Houston, Washington and Atlanta before heading in his own direction. LaFleur’s brother, Mike, is the passing game coordinator in San Francisco and was blocked by Shanahan this past offseason when Matt wanted to hire him as offensive coordinator in Green Bay.

“It's always a little bit different just because of how close you are with the other person,'' Shanahan says. ``I know Matt and Mike are as close as any brothers could be just like most people are with siblings, but it really doesn't matter. There's a lot of talk to it and stuff, but I mean, there's no feeling when that game goes on, there's no feelings when you're studying and preparing.

``Everyone cares about the other person. I know if we weren't in it, I know he'd be pulling for his brother just like when I wasn't going against my dad (long-time coach Mike Shanahan), I was always pulling for him. But, I know when you go against each other, that stuff doesn't matter. Everyone's got a job to do and everyone is pretty competitive and wants to win, also.”

Matt LaFleur also has a very tight relationship with 49ers defensive coordinator Robert Saleh. They were roommates as graduate assistants at Central Michigan and have been close friends since. Saleh recommended LaFleur for his first NFL job as a quality control offensive assistant with the Texans in 2008-09, when Shanahan was offensive coordinator.

“I was messing with him the other day,” LaFleur says. “I asked him to call me. I shot him a text message. I said, ‘Hey, would you give me a call? I have a couple questions about your defense.’

“That was the last of the communication.”

Shanahan also spent a year as offensive coordinator in Cleveland when Packers defensive coordinator Mike Pettine was head coach in 2014. Shanahan resigned from that job after one season and left to take the same position in Atlanta.

Vrabel doesn't have any connections in that way. He is the only one of the four who has won a Super Bowl.

``I think there’s always experiences that you try to draw from as a player,'' Vrabel says. ``I mean, that’s what I have (done). I spent 14 years in the National Football League, and I don’t even know how many playoff games, but those were good experiences about preparation and really focusing on what got us to this point from where we were at different points in the season. And then, there’s also things that I have to do as a coach to make sure that we’re ready.''