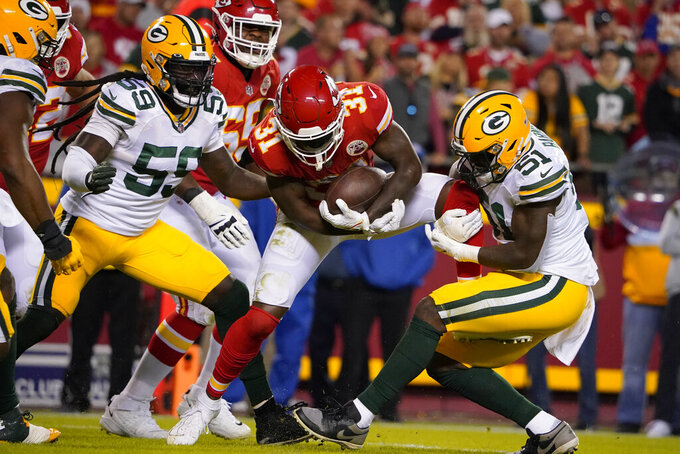 KANSAS CITY, Mo. (AP) — Patrick Mahomes threw for his lowest passing total ever in a game that he completed. The Chiefs never got backup running backs Darrel Williams or Derrick Gore going. Stars such as Tyreek Hill and Travis Kelce were held in check.

So naturally, the Chiefs beat the Green Bay Packers with their defense.

Yes, one of the league's worst defenses through the first eight weeks of the regular season was one of its best in Week 9, blitzing Aaron Rodgers understudy Jordan Love relentlessly in a 13-7 victory Sunday. The Chiefs picked off a pass near their goal line, hit Love seven times and sacked him once, and stuffed Aaron Jones and Co. on the ground.

Green Bay finished 2 of 12 on third down and managed 301 yards as its seven-game win streak ended.

“It has been kind of rough all year to get in the flow, to get things going,” Chiefs defensive end Frank Clark said. “I said a few week ago that we were getting healthy. That was the No. 1 thing. Then you start getting into the flow with your whole group with those ones and I feel like that is what’s been happening. The camaraderie in practice has been high. Guys are starting to respond better to the task at hand. We are just going out there and having fun again.”

Now it's the Chiefs' high-flying offense that isn't having any fun.

Mahomes was just 20 of 37 for 166 yards and a touchdown in another lackluster performance. Williams and Gore combined to average 3.8 yards per carry. Hill and Kelce combined for nine catches but barely topped 100 yards together.

Just about the only bright spot was the fact that Kansas City didn't turn the ball over for a change.

“I think practice, especially these last few weeks, has been crisp. I think we just have to execute when it comes to game day,” Mahomes said. “It’s different on game day. You can practice as hard as you want and have great practices, but if you aren’t going to go out there and execute on game days, it won’t matter.”

If there's a silver lining, it's that the Chiefs (5-4) have won the past two weeks despite their sputtering offense, putting them in a favorable spot in the AFC West heading to Las Vegas on Sunday night.

“We’ll go through that process of continuing to keep that practice tempo up, continuing to work on things here and there, and hopefully it translates to the game,” Mahomes said, "and we can find that same mojo that we had at the beginning of the season with the defense playing like they’re playing now.”

The Chiefs have been waiting all season for special teams to have an impact. They did on Sunday. Alex Okafor managed to block Mason Crosby's field-goal try in the first half, and the Chiefs pounced on a fumbled punt return later in the half. Harrison Butker drilled two field goals that ultimately proved to be the difference in the game.

More than anything else, the Chiefs need some confidence on offense. That high-flying, daring bunch that led them to three straight AFC title games has been replaced by a timid, seemingly lost bunch of stars. Part of it is defenses that simply refuse to allow the deep ball, but part of it is the Chiefs' inability to adapt to the way teams are playing them.

Defensive back L'Jarius Sneed handled Davante Adams in one-on-one coverage most of the game, including the play where he picked off Love near the Chiefs' end zone. Sneed finished with six tackles and two passes defensed.

Wide receiver Demarcus Robinson has seen his playing time dwindle over the past few weeks, and recently signed Josh Gordon played more snaps than him on Sunday. Robinson had just one catch for 2 yards against Green Bay.

Right tackle Lucas Niang hurt his ribs early in the game. He already was starting in place of Mike Remmers, who was out with a knee injury, and that meant third-stringer Andrew Wylie had to finish the game. ... Running back Clyde Edwards-Helaire (knee) is eligible to come off injured reserve, but Chiefs coach Andy Reid was non-committal when asked about a timeline Monday. “These next two weeks will be important for him,” Reid said.

226 — Reid moved into a tie with Curly Lambeau for fifth on the career regular-season wins list. Reid's total includes 130 with the Eagles and 96 with the Chiefs. He can move into fifth place alone against the Raiders on Sunday, and then set his sights on Tom Landry (250).

After back-to-back home games, the Chiefs head to Las Vegas on Sunday night for a crucial AFC West game. The Raiders and Chargers are 5-3 while the Chiefs and Broncos are 5-4. It starts a streak where four of the next five games for Kansas City are against division foes.