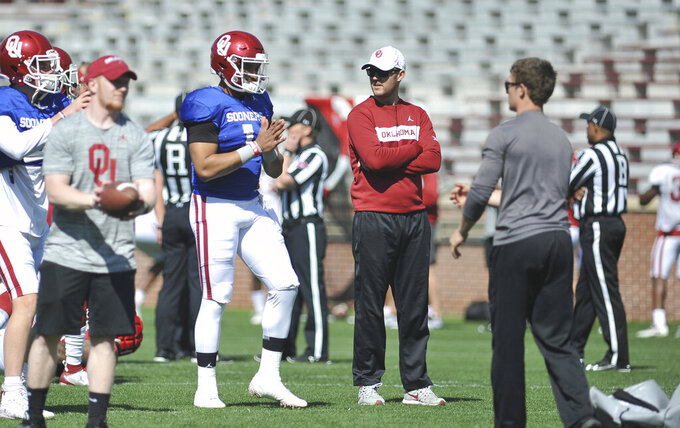 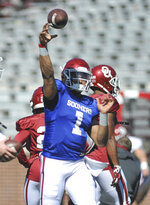 The week Oklahoma announced that Hurts was transferring from Alabama, he was watching halftime festivities during the Sooners' game against Vanderbilt. Seemingly out of nowhere, a long line of admirers developed. He smiled, posed for photos and signed autographs, seemingly unfazed by the sudden surge of attention.

"I definitely appreciate it," he said. "I'm in a new place. I'm a new face around here. It's cool and it's all love to embrace those guys."

Sooners fans had grown to respect Hurts from afar. The native of suburban Houston won a national title at Alabama and played for another as a starter. Last season, as Tua Tagovailoa's backup, he led a dramatic rally against Georgia in the SEC Championship Game.

This has all prepared him for a role that would intimidate most people — following Heisman winners Baker Mayfield and Kyler Murray as Oklahoma's quarterback.

Hurts is unfazed by this, too.

"I'm not your average Joe," he said. "Kind of built for these types of situations. There's never been really anything that's been in my way that I couldn't overcome or see through. I'm here. I'm going to do whatever I can to help this team in whatever way to achieve the things we want to achieve as a team."

Hurts showed he's becoming comfortable at Oklahoma's Spring Game on Friday night when he led the Red Team to a touchdown drive on his first possession. He threw a touchdown pass to Kennedy Brooks later in the first half and ran for a score in the second half as his squad beat the White Team 35-14.

Redshirt freshman Tanner Mordecai is trying to compete with Hurts, and incoming true freshman Spencer Rattler will jump into the mix in the fall.

Hurts is 6-foot-2 and 225 pounds — bigger and stronger than Mayfield and Murray. He relies on moxie to escape trouble, much like Mayfield did, and he's an effective runner like Murray. He's an accurate passer, but he hasn't been forced to use his arm as often as he likely will need to in the Sooners' system.

"The last two guys we've had had pretty unique skill sets, too," Oklahoma coach Lincoln Riley said. "I like his skill set a lot. I wouldn't have brought him in if I didn't feel like it would work. I feel like at any point with a new quarterback, you're going to get different feels with what they like and what they can do well."

Hurts, who was on the field briefly against the Sooners in last season's playoff win by Alabama, just wants to be the best possible version of himself.

"I don't want to get into comparisons," he said. "Baker's Baker, Kyler's Kyler and I'm me. I think the objective of all of this is, yeah, everybody wants to achieve their goals, everybody wants to do those things. But right now it's not about me. I'm stepping back from it. The biggest thing about this thing is achieving what we want as a team, getting what we want accomplished as a team."

Hurts will have plenty of firepower with him. CeeDee Lamb leads the receiving corps after grabbing 65 passes for 1,158 yards and 11 touchdowns last season. Lee Morris is back after hauling in eight scoring passes last season, and Grant Calcaterra returns after tallying six touchdown grabs.

The running game should be strong, too. Brooks ran for 1,056 yards and 12 scores as a freshman last season, and Trey Sermon ran for 947 yards and 13 touchdowns.

Hurts understands he's new to Riley's system, so he wants to progress quickly, yet remain patient. Riley said there are ways to adjust the system to fit a player's skills, too.

"What I think we were decent at with Kyler and Baker is you have to marry your schemes to them and find some common ground to where you're still running your system, but you're also tailoring it to what they do well," Riley said. "We'll certainly do that for Jalen and our other quarterbacks that will be here as well. I think he has an intriguing skill set that I'm excited to work with."

Hurts knows his past accomplishments alone won't win the respect of his new teammates.

What he does in their presence matters more.