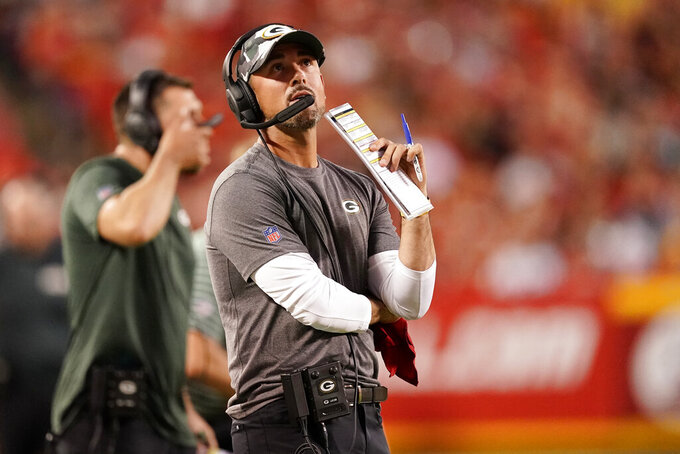 GREEN BAY, Wis. (AP) — The Green Bay Packers are serious about upgrading a special teams unit that has struggled for multiple years and had numerous breakdowns in a playoff loss last season.

If that wasn’t already evident from the hire of former Las Vegas Raiders interim head coach Rich Bisaccia as special teams coordinator, the Packers’ decisions as they put together their 53-man roster make the emphasis even more apparent.

“I think we’ve done a little bit of things that might be out of character for us, as far as some of the guys we brought in that maybe don’t play as big a role on offense or defense, but maybe they’re more heavy special teams players,” general manager Brian Gutekunst said. “We’ll kind of see how that goes.”

That strategy continued Wednesday as the Packers signed safety Rudy Ford one day after the Jacksonville Jaguars cut him. Gutekunst called Ford “one of the better gunners in the league,” referring to the role of the player who typically gets downfield the fastest on punt return coverage.

The Packers released safety Micah Abernathy to make room for Ford, whose given name is actually Johnathan. Ford said his family gave him the nickname “Rudy,” and that he believes it was based on the movie of the same name about former Notre Dame walk-on Rudy Ruettiger.

“If you watch that movie, you know he’s got heart,” Ford said. “So I also have that, too. So I can definitely see that trait.”

The Packers are looking for more guys with that characteristic as they seek to upgrade their special teams.

Green Bay had the worst special teams unit in the NFL last season according to efficiency metrics from Football Outsiders. In their 13-10 NFC divisional playoff loss to the San Francisco 49ers, the Packers allowed a game-tying touchdown on a blocked punt, had a field-goal attempt blocked just before halftime and had only 10 men on the field when Robbie Gould kicked a game-winning field goal as time expired.

“We’ve got to get better there to accomplish the goals that this team wants to accomplish,” Gutekunst said. “We have to be better.”

They’ve made that clear throughout the offseason.

“We definitely made some decisions that came down solely to that,” Packers coach Matt LaFleur said.

The changes on special teams began shortly after the playoff loss.

They allowed punter Corey Bojorquez to leave via free agency and brought in former Chicago Bears punter Pat O’Donnell to replace him, noting that O’Donnell was a better holder. They cut incumbent long snapper Steven Wirtel to clear the way for Jack Coco.

Green Bay officials focused on special teams again this week while deciding on the final roster spots. Gutekunst acknowledged that keeping some players primarily because of their special teams skills could reduce the Packers’ depth on offense and defense, but he was willing to take that risk.

“We needed to kind of get outside our comfort zone and do something different,” Gutekunst said.