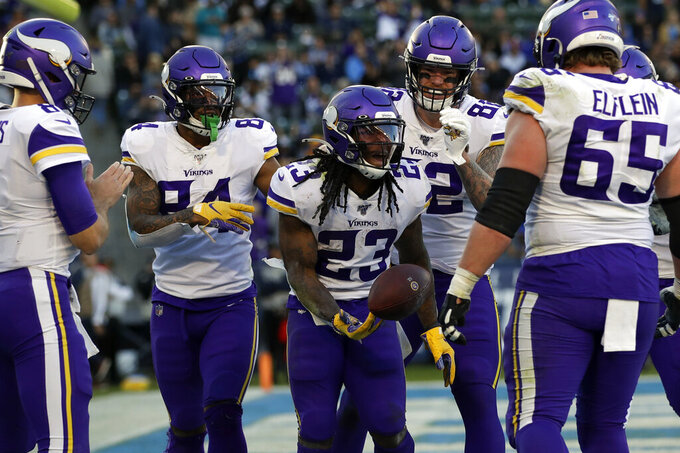 Minnesota Vikings running back Mike Boone (23) celebrates with teammates after scoring a touchdown during the second half of an NFL football game against the Los Angeles Chargers, Sunday, Dec. 15, 2019, in Carson, Calif. (AP Photo/Marcio Jose Sanchez)

MINNEAPOLIS (AP) — Sure, the Green Bay Packers haven't picked up many style points in this first season under coach Matt LaFleur.

They've been outscored in the second and fourth quarters. Only four of their 11 wins have come by more than one score. Their team rankings in rushing and passing yardage on both offense and defense are all in the bottom half of the league.

Here they are, though, needing only one victory over their final two games to take the division title. What's more, a first-round bye for the playoffs remains well within reach. Whatever the outcome of their visit to Minnesota on Monday night, this rookie year for the inexperienced LaFleur and his staff could hardly be recorded as anything but a job well done.

“This was the goal, to win the NFC North, and this is the game that can do it for us,” said LaFleur, the offensive coordinator for Tennessee last season who turned 40 last month.

From quarterback Aaron Rodgers on down the roster, players have raved about the contribution that the chemistry of this team has made to the stellar won-loss record and late-game resiliency. Beyond that, though, there aren't any secrets to this success for the Packers (11-3).

They have the second-fewest turnovers in the NFL with nine, and their rushing attack spearheaded by Aaron Jones has ably complemented Rodgers in his up-and-down attempt to help his young wide receivers hit their stride. The defense has the third-best interception percentage in the league and the fifth-best red zone rate, allowing fewer than half of opponent possessions inside the 20 to cross the goal line.

There were plenty of questions, both internal and external, about how Rodgers would work with LaFleur, but their initial relationship has by all accounts been a healthy one.

“He allowed for the leadership to kind of naturally come together. He empowered guys that need to be empowered, allowed his coaching staff to do the same, and I think naturally there’s been kind of a group within the group that’s formed from a leadership standpoint that we all hold ourselves, especially in that group, to a really high standard,” Rodgers said. “Because we have to set the tone for the rest of the squad, and Matt has fostered that ability I think by keeping things very simple.”

Though the Vikings (10-4) didn't win the division until their second season under coach Mike Zimmer in 2015, that ode by Rodgers to the power of simplicity would translate across the border in some ways, too. Though Zimmer is a defensive expert, not offense like LaFleur and the majority of their peers across the league, the Vikings have developed a consistent identity under his leadership even as their offense has changed hands and styles multiple times.

“I like this team. I like how they’re playing,” Zimmer said, adding: “I think we’re doing a good job scheming offensively. Defensively we’ve played a little bit better the last couple of weeks. If we can ever get it to the point where I really feel good about it, we could do some damage.”

Making that deep push through the playoffs will be more difficult on the road, of course, which is where the Vikings will be headed unless they get some improbable help in Detroit on the final day of the regular season.

The last non-division winner to reach the Super Bowl was the Packers nine years ago, and the only way Minnesota can win the NFC North is if the sputtering Lions beat the Packers in addition to Vikings victories in their last two games. They host Chicago on Dec. 29, with the chance to go 8-0 at home for the first time in 10 years. The Packers have yet to win at U.S. Bank Stadium, which opened in 2016.

“I feel like our fans are some of the best fans in the world, so playing at home in that atmosphere, it's going to be a lot of fun,” Vikings wide receiver Stefon Diggs said. "I look forward to it.”

Here are some other angles to follow for the game on Monday night:

DEBUTING WITH A DOZEN

LaFleur can become the 10th rookie coach in NFL history to win 12-plus games. Jim Caldwell (Indianapolis, 2009) and George Seifert (San Francisco, 1989) are the top two with 14-2 records. Matt Nagy, who went 12-4 with Chicago last season, was the most recent.

This game marks only the fourth time in five seasons in the NFL that two division opponents have played each other with 10 or more victories. Last year, the Chiefs were 11-2 when they lost to a 10-3 Chargers team in an AFC West showdown. The Patriots were 13-2 before they beat the 10-5 Dolphins in an AFC East game in the last week of the 2016 season. In 2015, the Vikings and Packers were both 10-5 entering their meeting in the final, won by Minnesota at Green Bay.

The Packers have joined the Bills and the 49ers as teams already in the playoff field that missed the cut last season. The Vikings, who can clinch a spot even before kickoff on Monday night if the 49ers beat the Rams on Saturday night, would make it four. Since the NFL expanded the tournament to 12 teams in 1990, at least four of them per year have made the field after an absence the prior season. The only others with a chance to stretch that streak for the league to 30 straight years are the Titans and Steelers in the AFC.