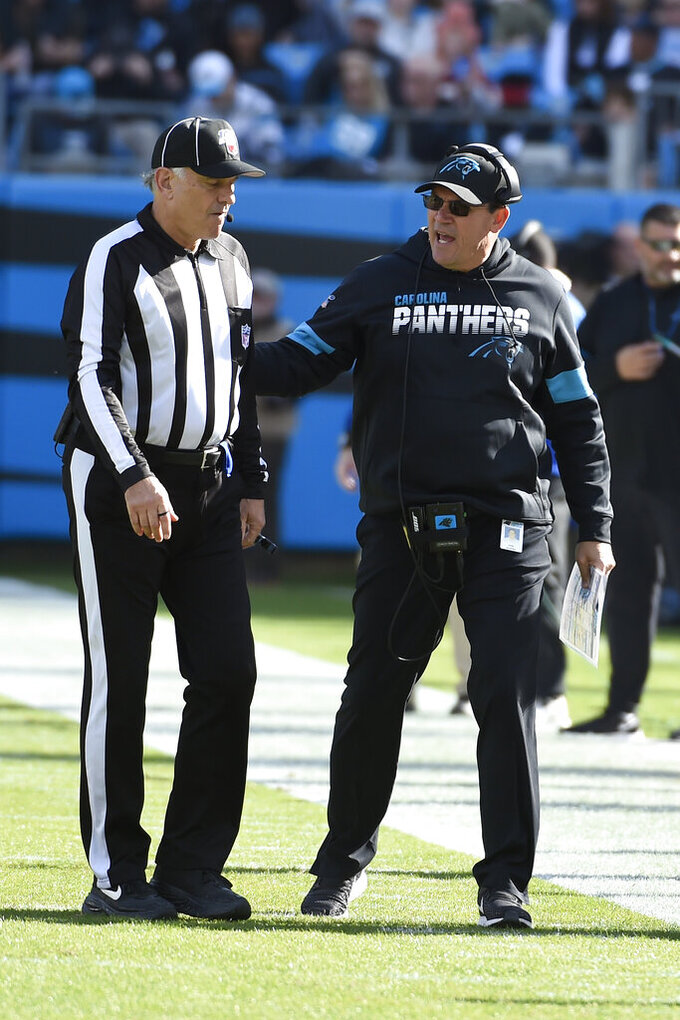 Carolina Panthers head coach Ron Rivera speaks with an official during the first half of an NFL football game against the Washington Redskins in Charlotte, N.C., Sunday, Dec. 1, 2019. (AP Photo/Mike McCarn)

CHARLOTTE, N.C. (AP) — Panthers owner David Tepper was up twice in the middle of the night after Carolina lost by 26 points to the struggling Atlanta Falcons two weeks ago.

Imagine how frustrated he is after his team lost 29-21 to the Redskins on Sunday, when it wasted a 14-0 lead. Washington scored 29 straight points, leaving Tepper’s stadium nearly empty by the end of the fourth quarter.

Tepper told the media after that loss to Atlanta that the long-term mediocrity that has haunted the Panthers organization since its inception would not be tolerated under his watch. Now his mandate will be tested as he’s forced to contemplate the future of coach Ron Rivera and his staff, as well as the team’s front office.

The Panthers (5-7) are essentially out of playoff contention after losing their fourth straight game with second-year quarterback Kyle Allen under center and a defense — one which Rivera calls plays for — that can’t seem to stop the run.

“I’m not worried about my future,” Rivera said after the game. “I’m worried about this football team. We have a game coming up on Sunday” at Atlanta.

Tepper has not addressed Rivera’s future and was not made available Sunday.

But clearly his job security looms large over the team.

Rivera, in his ninth season, remains a popular figure in the Panthers’ locker room.

But since losing to the Denver Broncos in Super Bowl 50 four seasons ago, the Panthers are 29-31 under the former two-time NFL Coach of the Year and have not won a division title or a playoff game during that span.

And they won’t this year either.

The Saints (10-2) have already clinched the NFC South and the Panthers are 3 ½ games behind the Minnesota Vikings with four games to go in the race for the conference’s second wild card spot.

More recently, the Panthers are 6-14 in their last 20 games.

Rivera’s tenure has always been directly tied to Cam Newton, with both joining the franchise in 2011.

And the biggest question may be if Tepper gives Rivera a pass because of Newton’s recent injury problems. Shoulder problems plagued the 2015 league MVP in the second half of last season and Carolina lost seven of its last eight games. This year foot problems ended his season after two games, forcing the Panthers to go with a second-year quarterback who had started just one NFL game.

Panthers cornerback James Bradberry said Rivera didn’t mention his future after the game when he addressed the team.

“He pretty much told us to worry about next week and come in prepared and get a win,” Bradberry said.

Added Panthers wide receiver Curtis Samuel: "We're not really focused on anybody's job. We're just trying to go out there and win games for our team and for coach.”

Panthers longtime linebacker Luke Kuechly said Rivera is not to blame, adding that he and his assistants do a great job of preparing the players.

Some players avoided the question altogether.

“That’s a sticky situation,” said wide receiver Jarius Wright. “Wish I could give you more.”

But one thing is for sure — the Panthers have become the very definition of mediocrity.

And that leaves Tepper with big decision to make in the very near future.