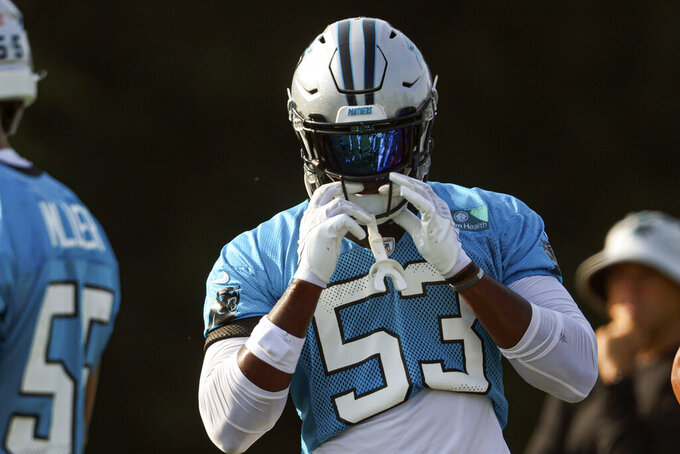 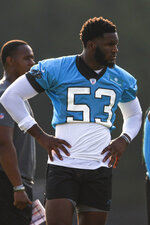 The Carolina Panthers believe their 6-foot-5, 250-pound edge rusher has the potential to be just that and more entering his third NFL season.

Burns had 16 1/2 sacks, four forced fumbles and a defensive touchdown in his first two seasons in Carolina, and the feeling around the Panthers organization is he's on the verge of a real breakout season now that general manager Scott Fitterer has added some key pieces around him.

Burns wears the wristband because he feels like he’s different than other edge rushers in the league.

“I bring something different to the table as far as my bend, my flexibility and my speed," Burns said as the Panthers opened training camp this week at Wofford College. "I'm a different breed.”

A first-round pick in 2019, Burns has seen plenty of double teams over the past two seasons but still managed to register 37 quarterback hits. He's earned the nickname “Spiderman” because he poses like the comic superhero after each sack.

But there were plenty of narrowly missed sacks last season that easily could have given him a double-digit sack total.

Reddick might be the biggest addition in Burns' development.

The Panthers haven't had a proven pass rusher on the other side of Burns, but Reddick had 12 1/2 sacks last season for the Arizona Cardinals. That potentially means fewer double teams for Burns.

Burns said when he sees Reddick lined up on the opposite end of the line his primary thought is, “make sure I get (to the quarterback) first.”

“I think he's going to bring another dog out of me,” Burns said. “It’s gonna be fun to have help, but it's also going to push me to work hard and get there faster because I know he's coming too.”

For Burns to take the step from really good to great he needs to continue to expand his skillset, Rhule said.

Burns is primarily known as a speed rusher, but Rhule thinks he can still improve his power rush, run defense and ability to drop into coverage.

“I know when you’re a rusher you want to rush all the time, but he’s such a great athlete he can affect the game dropping, rushing, playing the run," Rhule said. "He's got a lot to him.”

The Panthers worked on some team drills on Thursday and the starting offensive line included Taylor Moton at right tackle, John Miller at right guard, Matt Paradis at center, Pat Elflin at left guard and Cam Erving at left tackle. However, the team also gave Moton — who signed a four-year, $72 million contract extension earlier this month — some reps at left tackle.

Moving Moton to the left side remains a backup plan for now in case Erving or someone else struggles there. Moton is the team's best offensive lineman, but Rhule knows there is a risk that the Panthers weaken both tackle positions if Moton moves to the left side.

Rookie second-round draft pick wide receiver Terrace Marshall from LSU shined at the team's second practice after dropping a couple of passes on Wednesday. Marshall showed his speed by hauling in a deep ball during 1-on-1 drills and later displayed an impressive catch radius by making a leaping grab over the middle on a ball that was thrown a little behind him.

Marshall is battling with David Moore, a free-agent pickup from Seattle, and others for the No. 3 receiver spot behind 1,000-yard receivers D.J. Moore and Robby Anderson.