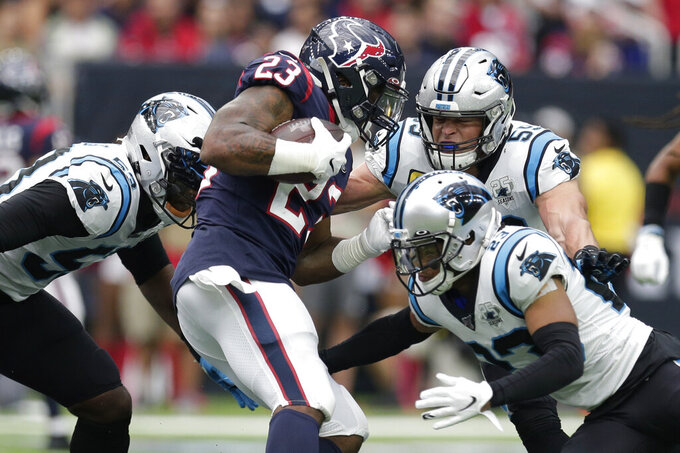 CHARLOTTE, N.C. (AP) — Carolina linebacker Luke Kuechly easily could have had an interception to add to his personal stats.

Gardner Minshew's heave toward the end zone on the game's final play Sunday was floating harmlessly through the air toward the five-time All-Pro linebacker, who had no one around him and 20 yards of daylight ahead. Intercepting the pass surely would have put an exclamation point on a hard-fought victory.

Instead, Kuechly swatted the ball to the turf with both hands to seal Carolina's 34-27 win over the Jacksonville Jaguars.

It was vintage Kuechly.

"He knew the most important thing was winning the football game and not about personal stats," Panthers coach Ron Rivera said. "That right there to me just epitomizes him as a football player and as a person — that he does the right thing."

There is a saying that players use in the Carolina locker room: "Well, that's just Luke."

The phrase encompasses any number of things — how Kuechly handles himself off the field, how he holds everyone to a higher standard through his work ethic, his dedication to pre-game preparation and his relentlessness in getting to the ball carrier on game day.

In his seven-plus NFL seasons Kuechly has been to six Pro Bowls and been named the league's defensive player of the year. This past week he became the fastest player in NFL history to reach 1,000 career tackles passing Brian Urlacher.

It's impressive, but stats don't matter to Kuechly, wins do.

He isn't the only player who has said that, but his teammates believe he means it.

"I just want to win," Kuechly said. "I think that is what it comes down to. Winning is more fun than any personal stat achievement. I'd rather have a game where I have two tackles and win than a whole bunch and we lose."

Next up for Kuechly and the Panthers are the Tampa Bay Buccaneers Sunday in London.

Kuechly has become known for his ability to call out an opponent's play before it is run because he recognizes the formation. It's a trait that has driven opposing coaches and quarterbacks nuts for years.

Olsen said there aren't a lot of players in the league like Kuechly, whose instincts and football awareness and IQ are "probably the best I've ever been around" in 13 NFL seasons.

"He wins so many plays before the ball is even snapped and the offense doesn't even have a prayer to block him," Olsen said. "Offenses come in saying 'we have to block this guy,' and sometimes he doesn't give you a chance. He's gone before you can even get started because he knows pre-snap what you're trying to do to him."

As good as he is as a football player, teammates say he's an even better person off the field.

Panthers safety Tre Boston said if he had a daughter, he'd want her to date Kuechly. He called Kuechly "egoless" and said his character is second to none.

"Did you know when you're drafted, the first person you meet here at the stadium is Luke?" Boston said. "He says, 'Hello, how are you doing?' That says a lot about a man's character. When you have a person like in that your locker room, an egoless captain, it is hard for guys to be full of themselves."

His play on the field and his attitude off of it have endeared Kuechly to Panthers fans. His No. 59 jersey regularly outnumbers any of his teammates in the crowd on a weekly basis at home games — and many times it's not even close.

NOTES: Quarterback Cam Newton will not make the trip to London, meaning he will miss his fourth consecutive start while resting a mid-foot sprain. ... Running back Christian McCaffrey (back) got the day off Wednesday.