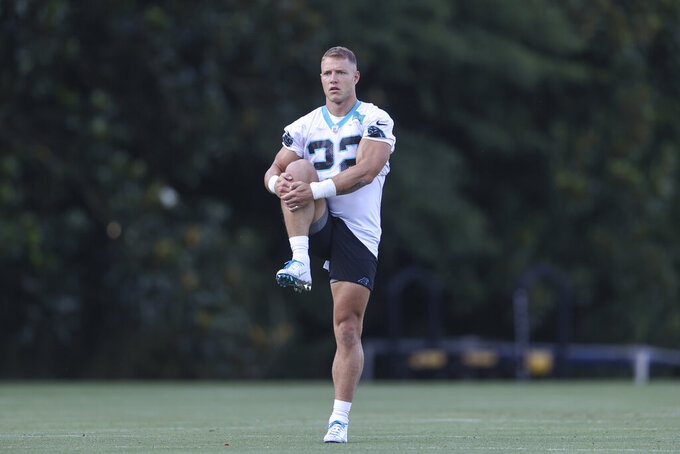 SPARTANBURG, S.C. (AP) — A year ago, Christian McCaffrey said he would choose himself if he had the top pick in a fantasy football draft. That move wouldn't have worked out too well.

McCaffrey missed 13 games with injuries in 2020, but his confidence level hasn't changed entering this season.

The 25-year-old McCaffrey appears to be healthy and back to full speed.

On the team's first day of training camp at Wofford College, McCaffrey took a pass from new quarterback Sam Darnold over the middle, made a smooth cut and exploded into a full sprint toward the end zone.

It's the type of explosive play the Panthers missed from the running back position last year.

McCaffrey said he feels “awesome” and is eager for the season to arrive.

"I'm just so fired up to play football again," said McCaffrey, the top-ranked running back in Madden NFL 22 ahead of Derrick Henry, Nick Chubb, Dalvin Cook and Alvin Kamara.

In 2019 McCaffrey earned All-Pro honors — and a four-year, $64 million contract extension — after becoming the third player in history to record 1,000 yards rushing and 1,000 yards receiving in the same season.

The Panthers' investment appeared to pay early dividends as McCaffrey racked up 223 yards from scrimmage and five touchdowns in his first seven quarters last season.

But then came the injuries.

A high ankle sprain in the fourth quarter of a Week 2 loss to Tampa Bay landed McCaffrey on injured reserve. He returned on Nov. 8 against the Kansas City Chiefs only to separate his shoulder. McCaffrey was hoping to return for the final few games of the season but developed a thigh problem, essentially ending his season.

McCaffrey made only minor changes to his offseason workout regimen, saying he didn't want to overreact. He hadn't missed a game in his first three seasons, during which he had 5,443 yards from scrimmage and 39 touchdowns.

“It's really just staying true to who I am,” McCaffrey said. “I’ve had success and I felt good with the past plan and training the way I train. ... Injuries happen in football and I’m so past that.”

When McCaffrey is on the field, the Panthers are a different team.

His ability to run between the tackles and break off big plays as a receiver — he caught 303 passes in his first three seasons — draws significant attention from defenders, which in turn takes pressure off wide receivers D.J. Moore and Robby Anderson.

“It’s a lot different with him because if he’s not the best back, then one of the best backs in the league,” Anderson said. “You get a lot more coverages that are more pass-friendly for me and D.J. when he’s on the field. He’s another threat as a playmaker.”

Rhule said having McCaffrey in the lineup also means the Panthers don't have to substitute as much at running back, which keeps defenses from picking up “tips” from the Carolina offense.

The Panthers signed wide receiver Krishawn Hogan after he tried out for the team following Wednesday’s practice. The 6-foot-3, 217-pounder has spent time with the Cardinals, Colts, Saints and Titans. He has played in 10 NFL games with one catch for 4 yards.

The Panthers typically draw thousands of fans for their first day of training camp, but only a few hundred attended on Wednesday. Players aren't signing autographs after practice this year in a pandemic-related precaution.