Panthers RB McCaffrey could use some help on offense 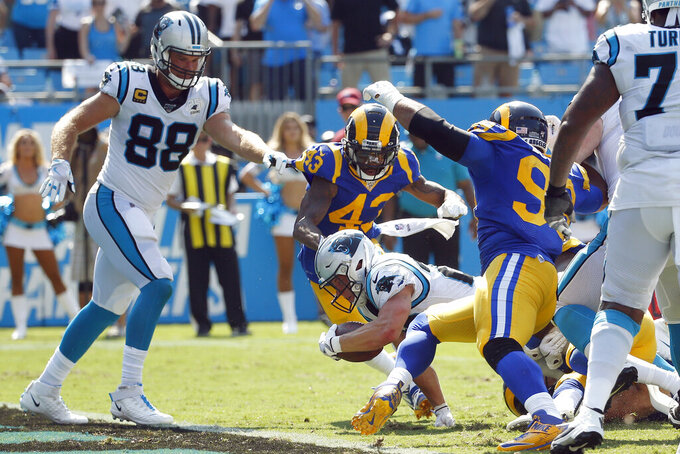 Carolina Panthers running back Christian McCaffrey (22) dives into the end zone as tight end Greg Olsen (88) watches during the second half of an NFL football game against the Los Angeles Rams in Charlotte, N.C., Sunday, Sept. 8, 2019. (AP Photo/Brian Blanco)

But while the Panthers' third-year running back only seems to be getting faster, quicker and more elusive , as evidenced by his 29-touch, 209-yard, two-touchdown performance on Sunday, he can't do it alone.

Despite McCaffrey's huge day, the Panthers still lost 30-27 to the Los Angeles Rams .

Tight end Greg Olsen was straight to the point after the game, saying "offensively as a group, outside of Christian, we have a lot of work to do."

McCaffrey has become the focal point of Carolina's offense. He wrested that tag from Cam Newton sometime last season when the quarterback found himself dealing with a troublesome shoulder issue.

Some of Newton's throws Sunday were high. Others were wide. Some were telegraphed. And he only once attempted a pass downfield.

It might have been a matter of shaking off the rust — he hadn't played since Dec. 17 — but the reality is Newton hasn't been the same player since earning MVP honors in 2015.

And now Newton's biggest strength, his ability to run the football, is not being utilized. Newton carried three times against the Rams for a career-low minus-2 yards. Coach Ron Rivera put that squarely on Newton, saying "that's more about the decisions he makes out there as a quarterback. It's the guy with the ball in his hands that dictates where the ball goes."

Wide receiver D.J. Moore offered some help Sunday with seven catches for 76 yards, but his first-quarter fumble killed a potential touchdown drive. Carolina's other options in the passing game — Olsen, Curtis Samuel and Jarius Wright — combined for a mere eight catches and 82 yards with no touchdowns.

With McCaffrey averaging 6.7 yards per carry and 8.1 yards per catch, it's hard not to use him, and even harder to take him out. So the Panthers didn't: McCaffrey played all 67 snaps on offense.

"It's tough to take him out and the young man doesn't want to come out," Rivera said. "But we have to think about certain things. But when he's playing the way he is, you want to keep the rhythm going."

With Norv Turner calling the shots on offense, McCaffrey is going to see a boatload of work as a runner and receiver — just like some of Turner's previous running backs: Emmitt Smith, LaDainian Tomlinson and Ricky Williams. But clearly the Panthers need others to step up on offense, including Newton, if they're going to make a playoff run.

Carolina's secondary did a nice job of holding Jared Goff at bay, limiting the Rams quarterback to 186 yards passing and one touchdown as they employed one defensive look that included extra defensive backs. Cornerback James Bradberry could be on the verge of a breakout season with an interception and a sack.

The Panthers, who are working on changing over to a 3-4 defense, allowed the Rams to run for 166 yards while averaging 5.2 yards per carry. Some players said they weren't prepared for the Rams to run as much as out of the shotgun. If anyone can help turn this around it is Luke Kuechly, who remains one of the game's best linebackers.

Brian Burns, the team's first-round draft pick from Florida State, looks like the real deal . An outside linebacker in Carolina's 3-4 alignment, Burns followed a solid preseason with two tackles , two quarterback hurries and a blocked punt Sunday. Once Burns figures out Carolina's defensive scheme he could become a dominant pass rusher with his quick first step and arm length.

Wide receiver Curtis Samuel was the star of the Panthers' training camp but was neutralized by the Rams. Samuel was targeted four times and caught three passes for 32 yards. Surprisingly, he did not receive any carries. Carolina desperately needs to get the playmaker more involved in the offense.

The Panthers appeared to make it through the season opener without any significant injuries. Now the hope is to get outside linebacker Bruce Irvin (hamstring) and offensive tackle Greg Little (concussion) back on the field soon. Both sat out Sunday.

53 — the Rams' third-down conversion percentage (9 of 17) on offense. The Panthers struggled to get off the field last season and they don't need those plays to carry over to this year.

The Panthers can't dwell on this loss as they host division rival Tampa Bay (0-1) on Thursday night. This could be a good chance for the defense to prosper after the Buccaneers lost 31-17 to the 49ers. Bucs QB Jameis Winston continues to struggle with turnovers and the Panthers will look to take advantage by applying pressure.