Patriots face Packers with Hoyer at QB for injured Jones 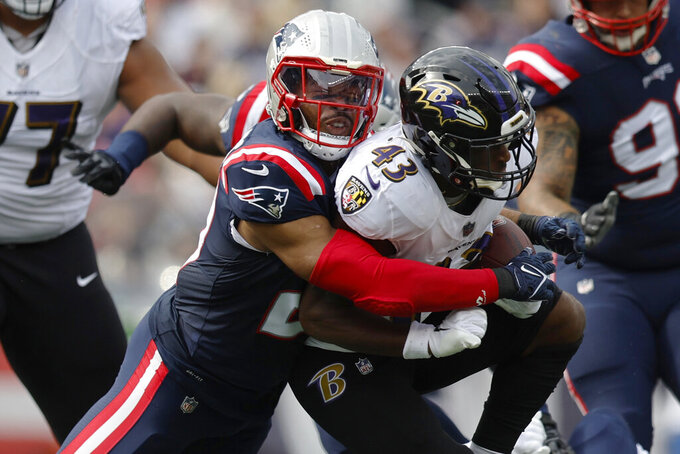 TURNOVER DIFFERENTIAL: Patriots minus-4; Packers minus-2

PATRIOTS PLAYER TO WATCH: CB Jonathan Jones. He has been one of New England’s most active players in the secondary this season, logging an interception, two pass breakups and a pair of forced fumbles. He rates as Pro Football Focus’ top player as his position through three weeks.

PACKERS PLAYER TO WATCH: LB De’Vondre Campbell. The 2021 All-Pro selection is coming off a performance in which he had 14 tackles and got his hand on Tom Brady's pass to foil a 2-point conversion attempt that would have tied the game with 14 seconds left.

KEY MATCHUP: Patriots RBs Damien Harris and Rhamondre Stevenson vs. Packers run defense: New England’s uncertain quarterback situation may force the Patriots to rely on their running game. Harris and Stevenson have rushed for a combined 305 yards through the first three weeks. The Packers allowed Chicago’s David Montgomery to run for 122 yards two weeks ago, but followed that up by limiting Tampa Bay’s Leonard Fournette to 35 yards on 12 carries.

KEY INJURIES: Patriots QB Mac Jones made a surprise return to practice Friday, but was ruled out for the game with an ankle injury. Coach Bill Belichick said Brian Hoyer would get the start if Jones was unavailable. ... Patriots DL Lawrence Guy is also out after not practicing all week because of a shoulder injury. .... Packers WR Sammy Watkins (hamstring) is on injured reserve and will miss a second straight game. ... Packers WR Christian Watson (hamstring) didn’t play against Tampa Bay, but fully practiced Thursday and Friday. ... Packers CB Jaire Alexander has a groin injury that knocked him out of the Tampa Bay game early. Alexander was practicing on a limited basis early this week and was questionable.

SERIES NOTES: The Patriots own a 6-5 edge in regular-season matchups, but the Packers beat New England 35-21 in the Super Bowl on Jan. 26, 1997. ... The Patriots have won three of the past four meetings. ... In their most recent matchup back in 2018, the Patriots outscored the Packers 14-0 in the fourth quarter to win 31-17 at Foxborough.

STATS AND STUFF: Hoyer has 10,631 passing yards and 55 career TDs (53 passing, two rushing) in 75 games (39 starts). Hoyer has made starts for seven NFL teams during his 14-year career, but has lost his past 11 and amassed a record of just 16-23. The 2020 loss to Kansas City was his lone start with the Patriots, when he stepped in for Cam Newton who was out with COVID-19. But Hoyer was benched during the game in favor of Jarrett Stidham. ... Patriots K Nick Folk extended his streak to 57 straight field goals made under 50 yards with a 35-yard kick vs. Baltimore last week to set an NFL record. He had been tied with Ryan Succop (2014-17 with Tennessee) at 56 straight. Folk’s last miss from inside the 50-yard line was a 45-yard attempt on Sept. 13, 2020, against Miami. ... Patriots WR DeVante Parker led the team with five receptions for 156 yards in Week 3, his second career game with 150 or more receiving yards. He had five catches in his only career game at Green Bay in 2018. ... Patriots DE Deatrich Wise had career highs in sacks (three) and tackles for loss (four) last week. ... Green Bay is allowing opponents to convert just 22.6% of third down situations, giving the Packers the NFL’s top third down defense. ... The Packers haven’t allowed a single first down on 45.2% of their series. Only the San Francisco 49ers, Tampa Bay Buccaneers and Philadelphia Eagles have better stats in that category. ... OLB Rashan Gary is the first Packer since Cullen Jenkins in 2010 to have at least one sack in each of the first three games of a season. ... Packers P Pat O’Donnell is the reigning NFC special teams player of the week. O’Donnell has landed nine of his 13 punts this season inside the opponent’s 20-yard line. ... The Packers are 6-0 at home against AFC opponents during Matt LaFleur’s coaching tenure. The Packers are 17-1 in Rodgers’ past 18 home starts against AFC teams. ... Packers OLB Rashan Gary and Patriots LB Matt Judon have both had a sack in each of the first three weeks. ... The Patriots and Packers have the NFL’s top regular-season winning rates since 2008. New England is 164-64 and Green Bay is 147-79-2 in regular-season games during that stretch.

FANTASY TIPS: While it’s probably asking too much to expect Parker to repeat his breakthrough performance from the Ravens game, that type of outburst makes him worth pursuing if he’s still on your league’s waiver wire. ... Packers WR Romeo Doubs may be worth starting as the rookie fourth-round pick from Nevada is adapting quickly to the NFL game. Doubs had eight catches for 73 yards and scored his first career touchdown against Tampa Bay.