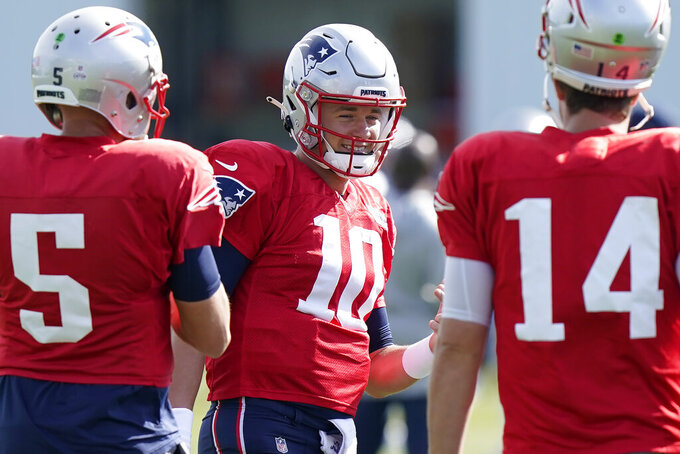 OPENING LINE: Patriots by 7, according to FanDuel SportsBook.

TURNOVER DIFFERENTIAL: Jets minus-5; Patriots minus-3.

JETS PLAYER TO WATCH: QB Zach Wilson. The rookie quarterback has just four touchdown passes and an NFL-leading nine interceptions, including four in the last meeting with the Patriots. He’ll be looking for a bounce-back performance against a defense that frustrated him in Week 2. Wilson is also trying to end a troubling trend to start his NFL career: He has thrown at least one INT in every game.

PATRIOTS PLAYER TO WATCH: TE Hunter Henry. After a slow start to the season, Henry has 12 catches for 132 yards and three touchdowns over the last three games. His three receiving TDs lead the team and his 22 receptions are second behind Jakobi Meyers (36).

KEY MATCHUP: Wilson vs. Patriots secondary. The Patriots put pressure on Wilson for most of their Week 2 win, forcing him into those season-high four picks. Wilson has thrown just one pick each of the past two games but can expect New England to try to make him uncomfortable in the pocket again this week.

KEY INJURIES: Jets LB C.J. Mosley is uncertain to play with a hamstring injury suffered in New York’s loss to Atlanta in London on Oct. 10. S Marcus Maye is expected to return from an ankle injury that sidelined him the last two games. … Patriots LB Dont’a Hightower (elbow/ankle), DE Deatrich Wise Jr. (knee) and CB Jonathan Jones (shoulder) all sat out the first practice of the week.

SERIES NOTES: The Patriots have won the past 11 meetings and have a 17-4 record against the Jets at Gillette Stadium. … The Patriots will be looking for their sixth straight season sweep and 22nd sweep overall vs. the Jets. … New England coach Bill Belichick has a 33-10 record against the Jets. … The Jets are looking for their first win against the Patriots since Week 16 of the 2015 season, when New York won 26-20 in overtime at home. ... The Jets’ last regular season win in New England was a 34-31 overtime win on Nov. 13, 2008.

STATS AND STUFF: New York has been hindered by slow starts, something coach Robert Saleh focused on while meeting with his coaches during the bye week. The Jets have zero points and just 79 total yards in the first quarter through five games, and have been outscored 30-0. They’re 2 for 11 on third downs in the opening quarter, and Wilson is 5 of 18 for 34 yards with two interceptions. New York has scored just 13 points — while opponents have scored 75 — and been outgained in total yardage 1,031-420 in the first half. ... The Jets are averaging just 3.6 yards per carry, better only than Houston and Las Vegas, both averaging a league-low 3.3 yards. ... New York is getting little production from its tight ends with Ryan Griffin (eight catches for 49 yards) and Tyler Kroft (six for 46) combining for 14 receptions and 95 yards with no TDs. ... The defensive line has been a bright spot. The Jets are one of eight teams with four players with 10 or more quarterback pressures, according to NFL Next Gen Stats: John Franklin-Myers (17), Quinnen Williams (14), Bryce Huff (12) and Sheldon Rankins (10). ... Against Atlanta, RB Tevin Coleman returned kickoffs for the first time in his seven-year NFL career. He took the second-half kickoff 65 yards to set up a TD run by Ty Johnson. He also had a 27-yard return. … Patriots QB Mac Jones is coming off completing 15 of 21 passes for 229 yards with two TDs last week for a season-high 118.9 passer rating. He is looking to complete 70% or more of his passes for the fourth game in a row. … Jones leads all rookie QBs in passing yards (1,472), completion percentage (71.1) and rating (89.6). … RB Damien Harris rushed for a season-high 101 yards and a TD last week, his fifth career game with 100 or more rushing yards. … Meyers has 50 or more receiving yards in three of his past four games. … LB Matt Judon leads the team with 6 1/2 sacks. Judon had six tackles last week and has a sack in four of his past five games. … CB J.C. Jackson had two of the Patriots four INTs in the Week 2 meeting. He has at least one pick in each of New England’s last three games vs. New York. … S Kyle Dugger had his first career interception last week. … K Nick Folk enters Sunday with 299 career field goals and needs one more to become the 35th NFL player to reach 300. He is a former Jet.

FANTASY TIP: Judon could have another big day against a Jets team that has allowed 18 sacks in 2021, the fifth most in the NFL. He had a sack in the Week 2 meeting and has a sack in two of his three career games against the Jets.