Playoff frustration continues for Raiders in loss to Bengals 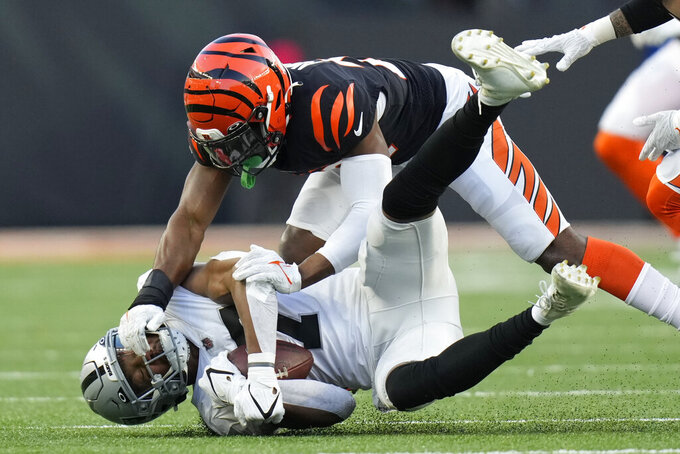 A season of tumult for Las Vegas could have been salved with the first playoff win in 19 years, but the Raiders couldn't catch up with the Cincinnati Bengals, who ended an even longer playoff drought of their own.

That most recent postseason win for the Raiders came in a conference championship game before they lost to Tampa Bay in the 2003 Super Bowl. Prior to Saturday, the organization had managed just one playoff appearance, a one-and-done wild-card game after the 2016 season.

Saturday's loss was tough to swallow.

Las Vegas cut the Bengals' lead to 26-19 late with a Daniel Carlson field goal and then got the ball back with under two minutes left in the game. Quarterback Derek Carr drove them to the Bengals 9 before he was intercepted by Bengals linebacker Germaine Pratt on fourth down.

“It sucks that it came down to that,” Carr said.

Las Vegas also was on the wrong end of a questionable officiating call.

Late in the first half, Cincinnati quarterback Joe Burrow threw a pass just before stepping out of bounds and the official at the sideline appeared to blow his whistle before Tyler Boyd caught the touchdown pass in the back of the end zone. Players on the field for the Raiders protested a bit to no avail.

The Raiders (10-8) had to overcame several troubling off-the-field issues this season to even get to the playoffs at all.

Coach Jon Gruden resigned after racist, anti-gay and misogynistic comments in emails were leaked. Receiver Henry Ruggs III was cut after being charged with a DUI resulting in a death. Defensive back Damon Arnette was released after a social-media video appeared to show the 2020 first-round pick threatening someone’s life while brandishing multiple guns.

Under interim head coach Rich Bisaccia, the Raiders won their last four regular-season games — each decided by four points or fewer — and beat the Los Angeles Chargers in overtime in the final week to win a wild-card spot.

Another postseason win will have to wait at least another season, with or without Bisaccia, who said he believes the team is moving in the right direction. Getting to the playoffs, he said, is proof.

“They put the culture on the right track — a winning mentality,” Bisaccia said. “They were responsible for it.”

Cincinnati and the Bengals organization had felt the same frustration. The team got its first postseason win since the 1990 season.

The Raiders will keep trying to get over the hump. Tight end Darren Waller, who had seven catches for 76 yards on Saturday, said they'll look to build on the good they took from this season.

“Like a team could go to the Super Bowl and be like ‘we’re gonna be back,’ but then the next year it’s tough for them, because it’s the NFL," Waller said. “So we gotta be able to take that into next year, but also not with any kind of entitlement. We gotta be able to start from square one and know that we had what it takes to weather any kind of storm and to take that into next year.”