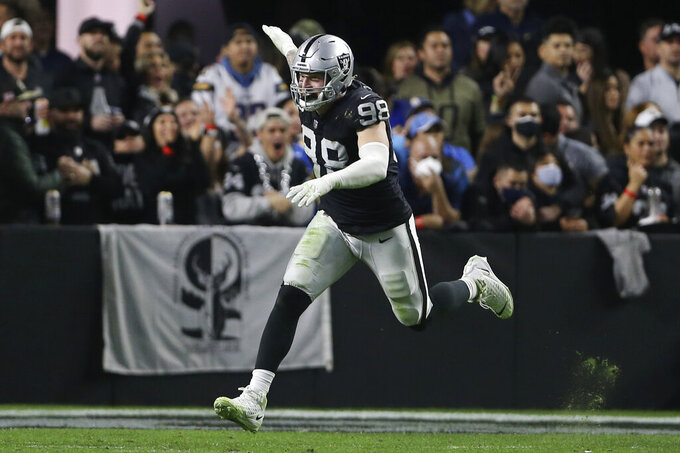 CINCINNATI (AP) — Either the Raiders or Bengals will win a playoff game on Saturday, and that will be news in itself.

Postseason success has been elusive for both teams for a generation. The frustration for one will end Saturday when they meet for an opening-round playoff game in Cincinnati.

The Raiders' most recent postseason win was 19 years ago, a conference championship before they lost to Tampa Bay in the Super Bowl. Since then, they've managed just one playoff appearance, a one-and-done wild-card game after the 2016 season.

Cincinnati is in the playoffs for the first time since the 2015 season, but hasn't gotten out of the opening round since the 1990 season.

The Bengals beat the Houston Oilers on Jan. 6, 1991, in the wild-card round before losing next week to none other than the Raiders.

Cincinnati flailed along for 15 more years before making it back in 2005. Seven postseason trips since then failed to produce a win, including five straight from 2011 to 2015.

“We're not worried about that,” quarterback Joe Burrow insisted.

The Bengals (10-7) won the AFC North with Chase — the fifth overall pick in the 2021 draft — and other young stars, behind the unflappable Burrow, the top overall draft pick in 2020.

Running back Joe Mixon gained more than 1,500 yards rushing and receiving combined. Tee Higgins, a second-rounder in 2020, had 1,091 receiving yards.

“(The Raiders) have to be ready for everything,” Burrow said. "We’ve got Joe Mixon and that offensive line that can move people in the run game, and that’s a big part of who we are as an offense and as a team. So teams have to prepare for that, as well as the freak shows we have on the outside.”

The Raiders (10-7) had to overcame several troubling off-the-field issues this season.

Coach Jon Gruden resigned after racist, anti-gay and misogynistic comments in emails were leaked. Receiver Henry Ruggs III was cut after being charged with DUI resulting in a death. Defensive back Damon Arnette was released after a social-media video appeared to show the 2020 first-round pick threatening someone’s life while brandishing multiple guns.

Under interim head coach Rich Bisaccia, the Raiders won their last four games — each decided by four points or fewer — and snagged a wild-card spot with an overtime win over the Chargers in the season finale.

“I think we’ve tried to develop a group of men that care about each other, know what to do and compete with relentless effort," Bisaccia said. “Also, once they learn to respect each other’s work, it’s an enjoyable place to come to work and to respond to whatever adversity or whatever prosperity may show up that day. It gives you an opportunity to forge your identity through the things in which you go through.”

Cincinnati went to Las Vegas back in Week 11 and beat the Raiders 32-13. The Bengals were coming off two bumbling losses and a bye week, and the win helped put them back on track. Defense and Mixon's powerful running made the difference.

“They’re super talented, well coached,” Raiders quarterback Derek Carr said. “I felt that we didn’t put our best foot forward. But at the same time, I don’t want to take anything away from them because they beat us. And they did a good job of stopping us and getting the ball from us and all those things.”

The Raiders have gotten a big boost during their season-ending four-game winning streak from running back Josh Jacobs. After struggling for much of the season behind a poor offensive line, Jacobs has delivered two of his best games during this recent stretch. He tied a career high with 129 yards rushing in a Week 16 win over Denver and then topped it in the playoff-clinching finale against the Chargers with 132 yards.

Besides getting back to the playoffs, the 2021 Bengals broke a bunch of single-season team records. Chase had the most yards (1,455) ever for a Cincinnati receiver. Burrow shattered records for passing yards (4,611), touchdowns (34), passer rating (108.3) and games with 300-plus passing yards (six). Rookie Evan McPherson's 58-yard field goal Dec. 19 at Denver was a new team record.

The strength of the Raiders all season has been a defensive line that has generated consistent pressure on the quarterback led by edge rushers Maxx Crosby and Yannick Ngakoue. Crosby led the NFL in pressures with 101, according to Pro Football Focus, and Ngakoue had a team-high 10 sacks. Now they get a chance to tee off against a Bengals line that allowed the third-most sacks in the league with 51.