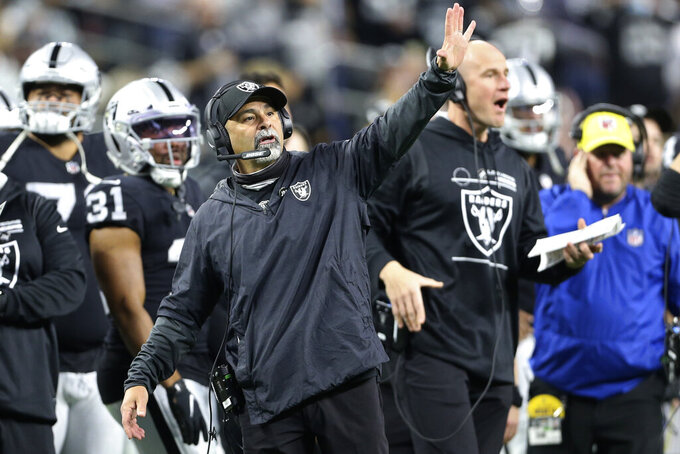 HENDERSON, Nev. (AP) — Rich Bisaccia had just completed his first game as interim coach of the Las Vegas Raiders in mid-October, a 34-24 road win over the Broncos, and star running back Josh Jacobs described the atmosphere on the sideline.

“It was like (there was no) anxiety. It was weird. It was like everybody was calm. You didn’t have somebody cussing at you, or going crazy at the refs — none of that,” Jacobs said, referencing the difference between Bisaccia and former coach Jon Gruden.

Another glaring difference between the two, something Bisaccia has accomplished that Gruden did not upon returning to the sidelines in 2018: The Raiders are going to the playoffs.

Las Vegas had more than its share of serious off-field issues this season. Gruden resigned after an email scandal; Henry Ruggs III was cut after police said he drunkenly crashed his car, killing a woman; Damon Arnette was cut after a video posted online that showed Arnette threatening someone with a gun; and Nate Hobbs was arrested for DUI just last week.

Nonetheless, the Raiders capped an improbable late-season run with a last-second overtime win over the Los Angeles Chargers to clinch a playoff berth.

“Our entire coaching staff has a great deal of pride for our team and the way in which they compete,” Bisaccia said after Sunday’s 35-32 win over LA. “That is what we try to preach every day. We try to find a way to get a little bit better, try to improve when the day is over.”

And without anxiety, apparently.

Which can’t be easy for a team that, in the midst of its off-field issues, stumbled through a 1-5 stretch in which it was outscored 194-103.

One of those losses? At home against the Raiders’ first-round opponent, the Cincinnati Bengals.

But the team the Bengals will host Saturday is far different from the one they trounced 32-13 on Nov. 21.

“We’ve got a special group,” receiver Hunter Renfrow said. “We picked each other up. We just have a resilient bunch. You’d like to think everything we’ve gone through this season has brought us tighter and is going to help us in the playoffs. I love those guys, I’m thankful for those guys. I couldn’t ask for a better group to be around.”

And it starts at the top.

Bisaccia is making a case to have the interim tag removed from his title. He has brought a sense of calm to a team that, in addition to its off-field woes, endured injuries and positive COVID-19 tests.

The Raiders are in the postseason for the first time since the 2016 season, and only the second time since they represented the AFC in the Super Bowl after the 2002 season.

“Just to see how coach Bisaccia led us this year, our coaching staff staying together,” Carr said Sunday night. “People had new roles and all those kinds of things. Hopefully I’d be in a Disney movie someday, and I get to play coach Bisaccia.”

The Raiders are hoping their four-game win streak will fuel them on a short week as they seek to avenge their loss to Cincinnati and keep their season going.

“When you think about what this team has been through, what they’ve had to endure, just to put themselves in a position to have a chance to get to the playoffs, life definitely took these guys in a lot of different ways,” former Raider and Hall of Fame cornerback Charles Woodson told The Associated Press after Sunday’s game. “When people think about this team, they think about all the things that they went through throughout the course of the season.

“Nobody ever gave this team a chance to be a in a position to make the playoffs.”