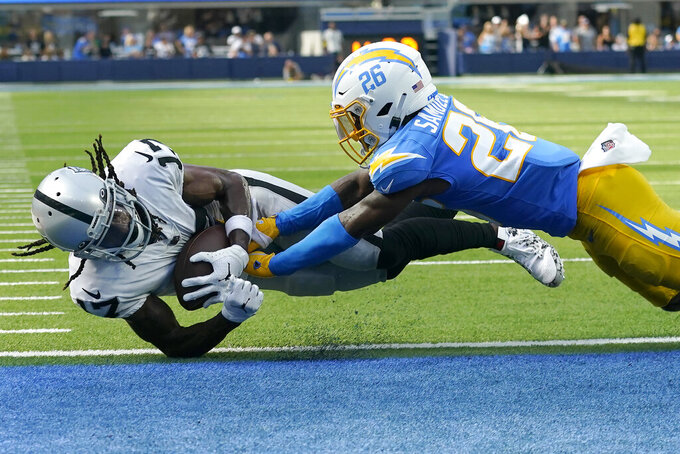 In Sunday's home opener against Arizona, Adams might be targeted twice.

“I’m not thinking, ‘How many catches does he have? How many times have I thrown it to him?’ I leave that to (coach) Josh (McDaniels),” said Carr, who completed 22 of 37 attempts, including two touchdown passes and three interceptions. “We’re not sitting here trying to count like, ‘We’re gonna get him 20, and him 10.’ A lot of it can dictate as soon as the ball is snapped, or even before. There was decisions I made in the game last week that happened before the ball was snapped. I already knew where the ball was going, and then we throw it there, we moved on.

“Whether it’s touchdown, complete, whatever — it didn’t matter.”

Unless the ‘whatever’ translates to those 15 incompletions and three interceptions — the latter of which can be attributed to mechanics and timing Carr will need to tweak in time for Sunday.

“We gotta make smart decisions. I just want the ball to go where it’s supposed to,” McDaniels said. “I’ve always said this, the defense gets a vote. I wish I could tell you exactly where it’s gonna go on every play, but they get a vote.

“They’ll have a vote this week.”

Carr’s leading receivers the last two seasons — Darren Waller and Hunter Renfrow — were each targeted six times and combined for seven receptions for 100 yards. Five others were targeted no more than twice.

McDaniels said the target distribution will even out, having seen “Randy Moss (get targeted) 20 times, and then the next week he has three targets” when he was the offensive coordinator in New England.

After watching the game tape, McDaniels said he spoke with Carr and is confident the offense will be much better this week.

It can’t get much worse.

The three interceptions Carr threw were tied for second most in Week 1 along with Rams quarterback Matthew Stafford, one behind Bengals quarterback Joe Burrow. Carr’s 8.1% interception rate ranks worst in the NFL.

“You want to establish identity as fast as possible,” said Adams, who had 10 receptions for 141 yards with one TD in his Raiders debut. “That doesn’t happen Week 1, whether it’s good or bad, regardless. It’s gonna take some time to get going and really figure out who you are as a squad, whether it’s on one side of the ball or all together.”