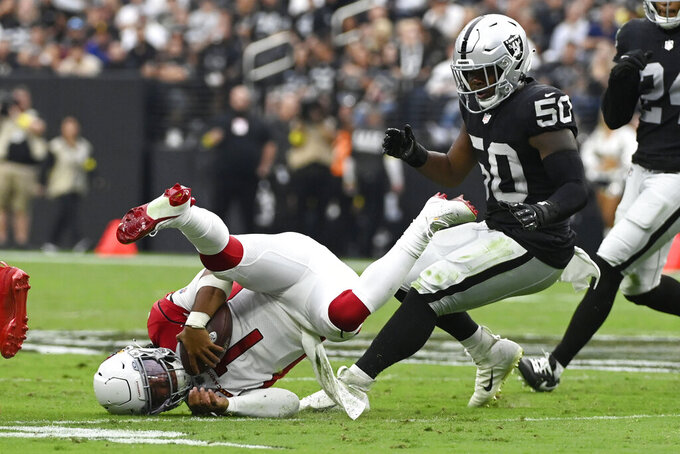 HENDERSON, Nev. (AP) — Las Vegas Raiders linebacker Jayon Brown is looking forward to his return to Nashville, where he spent the first five years of his career with the Tennessee Titans.

Henry, the NFL's second-leading rusher since he entered the league in 2016 with 6,904 yards, isn’t the only problem for the Raiders (0-2) as they search for their first win, but he might be the biggest.

The Titans (0-2) are also looking for their first victory, while Henry is looking for his first 100-yard game after reaching the mark in 20 of his previous 30 games before this season.

“I think we all know what we need to do,” Henry said. “We know it hasn’t been our standard, the success we had in the past, and we’ve got to be better. I think we all know that. We need to have a sense of urgency and that’s what we all focus on. I think the sense of urgency rises and you get a level that you just want to get it going at some point and that’s my main focus.”

The Raiders' defense has been shredded for 768 yards in two games, 10th-most in the league — including 413 by Arizona last Sunday, when Las Vegas blew a 20-point lead for the first time in franchise history and lost in overtime. The Cardinals rushed for 143 yards, plus quarterback Kyler Murray’s improbable two-point conversion scramble that covered a total distance of 84.9 yards, according to NFL Next Gen Stats.

And while Murray was elusive with his scrambling ability, Henry is an entirely different chore, running straight ahead with a deliberate and violent manner.

“He takes his first step and he’s just downhill,” said linebacker Divine Deablo, who led the Raiders with 16 tackles on Sunday. “We’ve got to do our best to get to him before he gets to that step.”

Henry, who’s rushed for 173 yards and 5.09 yards per attempt in three career games against the Raiders, is averaging 17 carries per game this season. At 6-foot-3 and 247 pounds, he’s the biggest back Las Vegas’ defense will have seen in its first three games.

“He is a big man,” Raiders defensive coordinator Patrick Graham said. “There’s not a lot of people on the planet that look like him. So, tackling is the number one thing, and then the relentlessness. I mean, this is a back that could get the ball 25-30 times in the game if you let him. So, I mean, it’s going to be relentless. He’s going to keep coming at you.”

Graham said he’s studied game film and referenced playoff games in which Tennessee’s offensive line and Henry built momentum to become stronger and tougher, wearing down defensive fronts until they won the battle in the trenches.

“So you've got to be ready to tackle them for four quarters and understand it’s not going to be a one-man show,” Graham added. “It’s going to be a whole bunch of guys that got to get to him.”

Graham, in his first stint with the Raiders, spent the last two seasons in the same capacity with the New York Giants. In that time, the Giants allowed the 11th-most rushing yards (3,975) in the NFL.

Raiders coach Josh McDaniels, known for his offensive IQ, couldn’t come up with one superlative to describe Henry.

So he offered several.

“Durable, big, physical, fast,” McDaniels said. “He’s just going to have the ball more than any other player on their team and we need to do a good job of trying to contain him. It’s very difficult to stop him.”

And it doesn’t help when the 2020 Offensive Player of the Year has scouted the Raiders and is just as hungry to lead Tennessee to its first win.

“It’s never a good feeling when you’re 0-2. You definitely want to win. It’s why you play this game.”