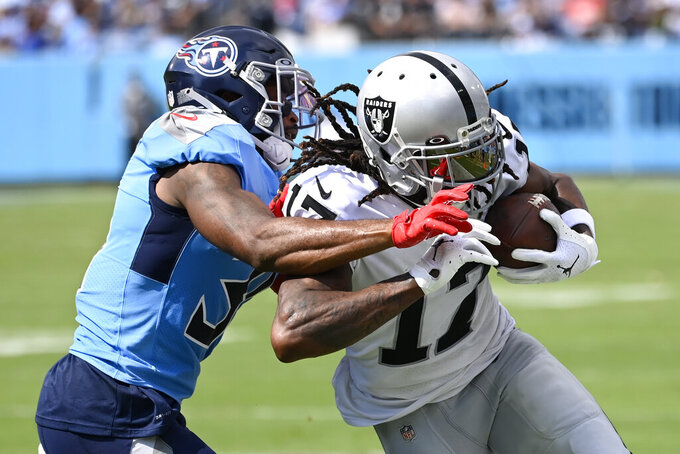 All those close games that seemed to go the Las Vegas Raiders' way last season have ended up as losses so far in 2022.

That's left the Raiders as the NFL's only team with three losses in three weeks.

Las Vegas fell short at the end once again Sunday, missing a late 2-point conversion in a 24-22 loss to the Tennessee Titans — the Raiders' third one-score loss of the season.

“Like most close games are, there’s a handful of plays that that they made and we didn’t that would sway the outcome, and unfortunately that’s three weeks in a row,” coach Josh McDaniels said last season.

The Raiders missed a chance to drive for the game-winning score in a 24-19 loss in Week 1 to the Chargers and then blew a 20-0 lead before losing 29-23 in overtime to Arizona in Week 2.

Las Vegas went 7-2 in one-score games, including four overtime wins, in 2021 to make it to the playoffs for the second time in 19 seasons.

“It’s tough. We’re so close,” edge rusher Maxx Crosby said. “We’re doing a lot of good things, we’re just not finishing and getting the wins. On the outside it’s frustrating, I get it. It’s frustrating in here. ... Even though it’s hard right now and seems like the world is closing down, we have a lot of positive things to take away.”

It wasn't supposed to be this way for the Raiders after they hired McDaniels and brought in big-ticket names Davante Adams and Chandler Jones. But Adams and Jones haven't made the expected impact early and the Raiders have regressed.

“Frustrated and angry,” Adams said about his mood. “Expect more. It’s not easy to win in this league. We know that. Nobody’s naive to the fact that nobody’s just going to lay down and just give you a victory, but at the end of the day we expect more and we will do better as we move forward.”

Deep shots to Mack Hollins: Carr connected on deep shots to Hollins that went for 48 and 60 yards — part of a big day for Hollins, who had eight catches for 158 yards and a TD.

He has 240 yards receiving in three games this season, more than he has had in any previous season since entering the NFL in 2017.

Red zone offense: The Raiders made a big focus on fixing their red zone woes this offseason but it hasn't paid off yet. Las Vegas drove inside the 20 six times against the Titans and ended up with only two TDs. Three drives ended in field goals and another on an interception in the end zone. The Raiders have scored TDs on 6 of 13 red zone drives, seventh worst in the NFL.

S Duron Harmon. With Tre'von Moehrig sidelined by an injury, Harmon had another strong performance. He had an interception in the second half after making two big stops in OT last week. With Johnathan Abram struggling on Sunday, Harmon could remain in the lineup even after Moehrig returns.

Adams. Las Vegas' big offseason addition had another quiet game with five catches for 36 yards. After a big performance in the opener, Adams has only 44 yards from scrimmage the past two weeks as Carr and the Raiders have struggled to find a rhythm. Adams is averaging 1.48 yards per route run, down from 2.81 last season, according to PFF analytics.

CB Nate Hobbs in in the concussion protocol after getting hurt Sunday. ... CB Rock Ya-Sin also left the game with an injury. ... The Raiders hope to get Moehrig, C Andre James (concussion) and WR Hunter Renfrow (concussion) back this week.

0-3. The Raiders are the only 0-3 team in the league, the first time only one team started 0-3 since 1959 when the Lions did it. The Raiders joined the 2012 Saints and 1989 Cowboys as the only teams since the merger to start a season 0-3, losing to teams that had no other wins in the first three weeks. Las Vegas' opponents are 0-6 and have been outscored by 16.2 points per game when not playing the Raiders.

The Raiders host Denver on Sunday, trying to avoid their first 0-4 start since 2006.