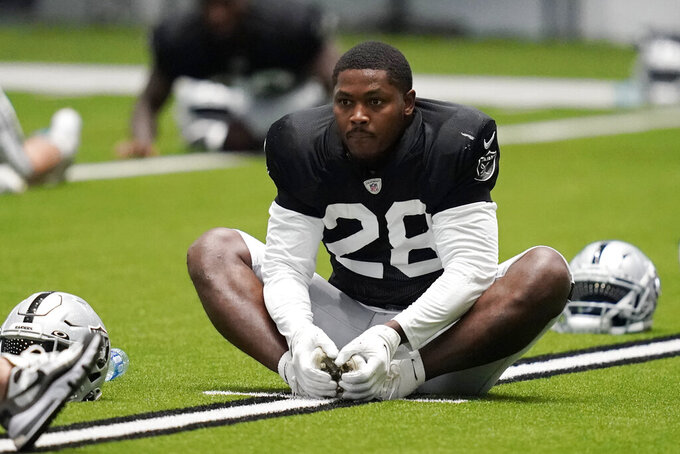 Derek Carr vowed to quiet the doubters in his seventh season as starting quarterback for the Raiders.

The quarterback who looked like one of the top young passers in the league back in 2016 has been unable to lead an offense to even a 20-point-per-game average in each of the last three seasons. A poor supporting cast and adjustments to new systems set the Raiders back on offense.

But the ingredients should be in place this season when the team debuts in Las Vegas to determine whether Carr still has what it takes to lead the franchise.

“The opportunities are limitless,” Carr said. “I think that’s what coach Gruden wanted. He just wanted a whole bunch of different versatile guys that he can call this or he can call that. ... He’s going to make sure that he’s going to stress you out with every ability that we have, and in that room there is just so many things.”

Carr did some things well last year when he set career highs in yards per attempt (7.9), rating (100.8) and completion percentage (70.4%). But that didn’t translate into points as the team averaged only 19.6 thanks to poor performance in the red zone and a lack of big plays.

The excitement over the move to Las Vegas has been tempered a bit by the fact no fans will be allowed at the games because of the coronavirus. Owner Mark Davis has said he won’t go to games either until his fans are allowed, so the real unveiling might not come until 2021.

“It’s crushing,” Gruden said. “I know how bad it hurts our owner, Mark Davis. He set this thing up, I don’t know how he did it, but he’s crushed. I know he’s crushed for not being able to let his fans in here.”

The Raiders got more production out of their rookie class in 2020 than perhaps any other team, leading the NFL in sacks, touchdowns and yards from scrimmage from first-year players. Maxx Crosby had 10 sacks, Jacobs led all rookies with 1,150 yards rushing, Renfrow and Foster Moreau were capable receiving options.

That group can contribute even more this year. No. 4 overall pick DE Clelin Ferrell added strength in the offseason and is being counted on for more production than the 4 1/2 sacks he had last year. Second-round pick CB Trayvon Mullen could take another step after showing flashes after taking over as starter in the second half of the season, and first-round safety Johnathan Abram provides energy on defense after going down with a season-ending shoulder injury last year.

The Raiders have invested more money in the offensive line than any other team in 2020, and are counting on that to be the strength of the offense. Rodney Hudson has been the top pass-blocking center for years and leads the group. Brown is one of the top right tackles when healthy and Kolton Miller took a big step forward in his second year at left tackle. Richie Incognito didn’t miss a step at left guard after sitting out 2018, and Jackson at right guard should be healthy this season, giving Carr plenty of time to throw.

The Raiders have struggled at all levels on defense since Paul Guenther took over as coordinator in 2018. The pass rush hasn’t been able to make up for the trade of Khalil Mack, the linebackers struggled in pass coverage, and the secondary has been a revolving door of mediocre play.

Guenther should have at least five new starters this season, with the secondary upgraded by first-round cornerback Damon Arnette, and free agents Prince Amukamara and Damarious Randall. But the key is at linebacker, where free agents Cory Littleton and Nick Kwiatkoski are the team’s best pair at the position in more than a decade.

“We look more dynamic,” Crosby said. “We look more hungry. We have guys that want to beat a lot of people and I love that. I think we’re going to open some eyes for sure.”

The Raiders brought in their most accomplished backup QB since Carr arrived in 2014 when they signed 2015 No. 2 overall draft pick Marcus Mariota to a deal that guarantees him $7.5 million this season. Mariota lost his job to Ryan Tannehill last year in Tennessee but could be poised to take over if Carr struggles or gets hurt this season.